Gary Peters made his first major speech on the Senate floor, urging the feds to make significant investments in research 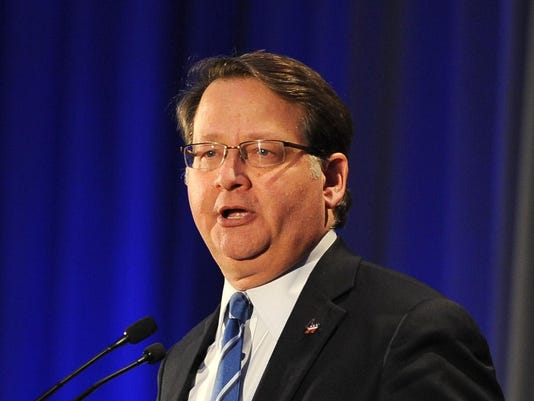 The Bloomfield Township Democrat — who previously served three terms in the U.S. House — won election in November to the Senate to replace Carl Levin, the longest-ever-serving senator in Michigan history.

His speech was known as his “maiden floor speech” — even though Peters has made remarks on other issues on the floor since taking office — and noted that automakers are speeding toward high-tech connected cars and eventually driverless vehicles.

“As manufacturing and technology merge, Michigan is prepared to lead the way. What were once separate industries are now merging into complements in a battle for the future that America must win,” Peters said.

Peters, who has made it a practice to only introduce legislation with Republican co-sponsors, said both parties must work together to find common ground.

“We also will not be able to accomplish anything without embracing pragmatism and bipartisanship. We cannot focus on whether ideas come from a Republican — or a Democrat — we need to focus only on whether an idea has merit and is good for the country,” he said.

“We cannot rest on our laurels. We are in constant competition. The coming decades will see rapid growth abroad, but I know our nation will continue to lead the world with our ability to innovate and efficiently align capital and talent to maximize the strengths of our workforce,” Peters said. “Michigan is at the forefront of developing the transformative technologies that will re-make America — and help our country sustain its stature and prominence.”

For most of the 20th century, Michigan was an economic powerhouse — buoyed by the strength of the U.S. auto industry and other manufacturing sectors, he noted.

“We will need to discover the next big thing. I don’t know what the next big thing will be, but I do know the federal government must continue investing in the seed corn of basic research and development,” Peters said. “From the Facility for Rare Isotope Beams at Michigan State to Wayne State’s bioresearch facility to the University of Michigan’s extensive joint projects with NASA, our state’s universities are leading the way in research.”

But the Wolverine State is still recovering from the single worst seven-year economic period since the Great Depression.

Peters also warned of the growing divide between rich and poor.

“Growing income inequality is a threat to our middle class, our economy and our democracy. While globalization is opening new markets for American goods, it’s also hollowing out the mid-level jobs that are the foundation of America’s middle class,” Peters said. “...There are many ideas about how to deal with these challenges, but history has taught us that increased productivity is the No. 1 driver of economic progress — and in my view — the key to American greatness.”

But in recent years, despite significant productivity gains, wages have not kept up. They had largely risen in pace with productivity since the 1970s.

Peters recently moved out of a temporary office housed in a trailer and into a permanent office in the Hart Senate Office Building, named after the late Sen. Phil Hart from Michigan, known as the “Conscience of the Senate.”