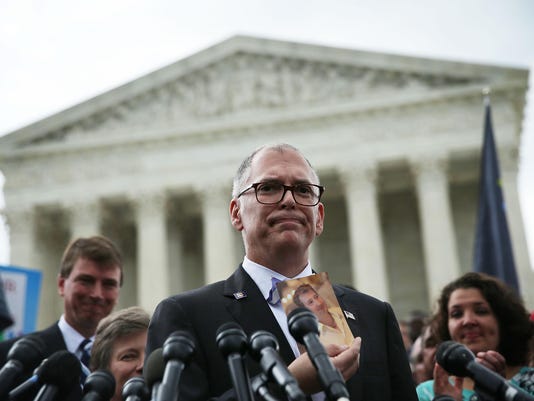 Jim Obergefell sued to be listed on the death certificate of his late husband, John Arthur.(Photo: Alex Wong / Getty Images)

The 5-4 decision by the court is a particularly significant victory for many residents of the 14 states where same-sex marriages were banned until Friday, often under state constitutional amendments.

Gay couples who are married will now be able to file joint state tax returns, inherit property easily and enjoy hospital-visitation rights just like opposite-sex couples can. In his majority opinion, Justice Anthony Kennedy cited these and other practical benefits of marriage as a reason to require states to recognize same-sex marriages.

“By virtue of their exclusion from that institution, same-sex couples are denied the constellation of benefits that the States have linked to marriage,” Kennedy wrote. “This harm results in more than just material burdens. Same-sex couples are consigned to an instability many opposite-sex couples would deem intolerable in their own lives.”

The financial gap between gay and straight married couples has been narrowing over the past few years. The Supreme Court, in a separate case in 2013, overturned the core of the federal Defense of Marriage Act.

That decision meant gay couples in states where same-sex marriage is legal could file joint federal tax returns and get spousal exemptions under the estate tax.

Some states, however, then required gay couples to split their tax returns for state purposes.

One of the biggest areas ripe for change will be health and medical benefits.

Currently, some employers offer health benefits to unmarried same-sex couples while others don’t, said Todd Solomon, a partner in the employee benefits practice group at McDermott Will & Emery.

The ruling also may simplify traveling for those who are already married, said Janis Cowhey, a partner at Marcum LLP in New York and co-leader of the firm’s Modern Family & LGBT Services Practice Group.

Cowhey has told clients who are married in New York, for example, to keep their documents such on a flash drive — in case they are traveling in a state where their marriage isn’t recognized.

If there’s a car accident, they would have the documentation needed to help make medical decisions, she said.

“You seemingly equalize rights across the board to couples regardless of gender of the married persons.”