Washtenaw County couple wanted to be part of history

Washtenaw County couple wanted to be part of history

"We're going to get married after 43 years," said Marge Eide, right, 77, with her partner Ann Sorrell. "Do you think we are rushing this?"l(Photo: Jennifer Chambers;The Detroit News)

Patch Harrison learned of the U.S. Supreme Court ruling that legalizes same-sex marriage across the land Friday morning and spared no time in coming to the Ann Arbor Washtenaw County Clerk/Vital Records office to get a marriage license to marry her partner, Jessi Fox.

The 27-year-old Hillsdale woman was the first to receive a marriage license to wed her same-sex partner in Washtenaw County after the high court issued its ruling at 10 a.m. on Friday.

"When knew the ruling was coming down this month, and we decided we wanted to be a part of history," Harrison said.

"We wonder in our life what is that big moment going to be. This is one of those," she said.

Washtenaw County Clerk Larry Kestenbaum came out to congratulate Harrison, as the first recipient of a marriage license in the county when gay marriage is legal.

Patch Harrison, 27, left, and Jessi Harrison, 23, of Hillsdale, in front of the Washtenaw County Administration Building in downtown Ann Arbor were they were married on Friday. (Photo: Clarence Tabb Jr. / The Detroit News)

Kestenbaum shook hands with Patch, 27, who had completed all the paperwork and was waiting for Fox, 23 to meet her in downtown Ann Arbor to get married.

"I'm delighted and I'm relieved," Kestenbaum said of the ruling Friday. "If the ruling was different it could cause further legal and political problems. This settles it."

In Ann Arbor, Gail Luera and Rachel Apgar stepped into the Washtenaw County Register Vital Records room and requested a yellow marriage form, freshly updated this morning to allow each applicant to choose female and female or male and male. 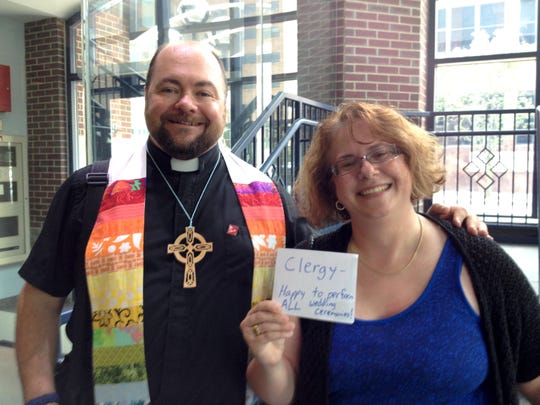 The couple learned they will have to return after Luera learned she needs her California birth certificate. Still, the joy across their faces was undeniable.

"When I heard the news I was cheering in my office and my coworkers cheered. Then I told my boss I was going to get married," said Apgar, 50, who works in IT at the University of Michigan.

Luera was grading final college exams when news of the national decision was made Friday.

"I cheered at home and said 'it happened. SCOTUS rules!'" she said.

The Ann Arbor couple already live together and planned a July honeymoon in Hawaii in anticipation of the ruling. They were able to get their license later Friday afternoon and planned a ceremony at a later time.

"This means recognition, equal rights. It's nice it can happen in our home state. It means a lot," Luera said. "And it's recognized across the U.S. and it can't be taken away."

The Rev. Greg Briggs showed up at the Washtenaw County vital records office to offer his support and ordainment services in the wake of the announcement on Friday.

"So far there are more reporters than couples here but that's great. There is no rush now. It's the law of the land. Plan the ceremony you want," Brigg said, wearing a black and a rainbow-colored stole on his shoulders. "My concern was to come down here and marry people if they needed it for medical coverage or something."

Ann Sorrell and Marge Eide, together 43 years, beamed as they walked into vital records to get their marriage license.

The Ann Arbor couple was ready to take their vows and begin their life as a married couple in a land where it is now legal.

The Washtenaw County Clerk/Vital Records office will accept requests for a marriage license until 4 p.m. Friday. The office is closed Saturday and Sunday and will reopen Monday at 8:30 a.m.