State police finished a probe into ex-state Rep. Courser’s claim he got text messages threatening to expose his affair 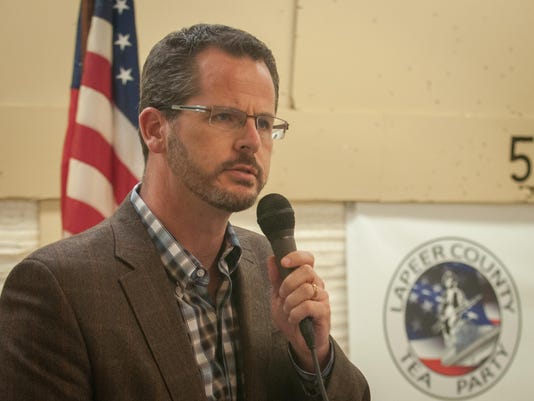 Lansing — The Michigan State Police have turned over to the Lapeer County prosecutor’s office an investigation report into former state Rep. Todd Courser’s claim that he received mystery text messages threatening to expose his extramarital affair if he didn’t resign from office.

“This investigation only focused on the alleged extortion case involving text messages sent to Todd Courser,” Banner said in an email.

Lapeer-area Republican Courser has said he and former Rep. Cindy Gamrat, R-Plainwell, received anonymous text messages in May from a Detroit-area phone number threatening to publicly expose their affair if they quietly didn’t step down.

Courser has claimed the text messages caused him to devise an elaborate scheme of sending fellow Republicans an anonymous email claiming he was caught having sex with a male prostitute behind a Lansing nightclub.

Turkelson’s office said Thursday the prosecutor would have no comment on the report until next week at the earliest.

Courser sent a campaign email Thursday asking supporters to call Turkelson’s office and pressure him to release the state police’s report before Tuesday’s primary, in which 11 GOP candidates are running.

“The state police have confirmed they have proof and know who was involved, but they do not have any intention of releasing the information until after the election — clearing my name after doesn’t do a damn bit of good and there is no legitimate purpose to withhold the information now,” Courser wrote.

Legal experts have told The Detroit News it would be an uphill battle to prove criminal blackmail against the person who allegedly sent text messages to Courser and Gamrat threatening to expose their relationship.

But some criminal defense attorneys who reviewed the text messages say the threats may meet the threshold for felony extortion because they demand that the two legislators resign against their own free will.

Courser, a bankruptcy attorney, has accused his and Gamrat’s former House aides of being behind a “plot” to “blackmail” them into resigning from office. Former aides Keith Allard and Ben Graham have denied any involvement in sending the anonymous text messages and are now suing Courser for defamation.

Although he has publicly admitted to sending out the false email about having a homosexual affair to cover up his relationship with Gamrat, Courser has denied sending the text messages himself.

Separately, the state police and Attorney General Bill Schuette’s office are still investigating the sex scandal that led to the Michigan House ousting Gamrat in the early morning hours of Sept. 11, shortly after Courser resigned to avoid an expulsion vote.

Davison said Courser’s fixation on the anonymous text messages doesn’t explain why he would create a smear campaign against himself to divert attention from the affair with Gamrat.

“This is just a massive smoke-and-mirrors effort, and I don’t think anyone is buying it,” Davison said Thursday.