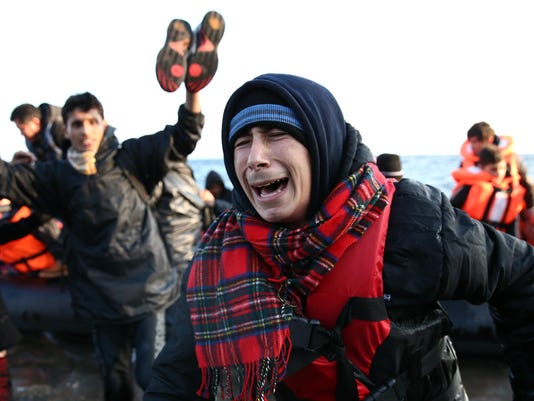 Thousands seeking refuge have been landing in Greece. Those who apply to come to America face rigorous checks, the White House says.(Photo: Carl Court / Getty Images)

Gov. Rick Snyder and state lawmakers can do little to stop the flow of refugees from war-torn Syria into Michigan, though they could make it tougher for the immigrants once they arrive, legal experts say.

Snyder has halted earlier efforts to open Michigan to Syrians fleeing their country’s civil war. He wants the federal government to first strengthen its security reviews of refugees entering the United States.

The Republican governor’s caution comes as at least one legislator in Lansing drafts legislation seeking to regulate refugee resettlement in Michigan. State Rep. Jim Runestad, R-White Lake, said Tuesday he wants to prohibit the resettlement of refugees from a “failed state” such as Syria, where he argues there’s “absolutely no verifiable evidence” of a person’s background.

“These terrorist groups are very adept at coaching people about what to say and what not to say,” he told The Detroit News.

Runestad said he’s working on a second bill to prohibit the state from spending tax dollars on refugee programs without approval of both the Legislature and a county commission where the resettlement is proposed. He also wants a full accounting of state tax dollars spent on social services, welfare, housing and education for refugees annually.

“These are certainly things we have a right to know,” Runestad said.

The U.S. Constitution and the 1980 Refugee Act give the federal government power over refugee placement.

But Snyder, the first of about two dozen governors to raise concerns about the vetting of migrants, made clear in a Time commentary published Tuesday that he wants to keep Michigan open for refugees.

“Our state must be open to the people looking to rebuild shattered lives just as it should be open to those who come here to learn in our universities or those who come to build or invest in our state’s industries,” he wrote in Time. “We must never confuse the people who look to us for safety and opportunity with those who wish to do us harm. I am simply asking for assurance that the federal process will know the difference.”

Michigan and other states could not legally deny refugees entrance into the state — a restriction of which Snyder is likely aware, said Richard Primus, a constitutional law professor at the University of Michigan.

“There’s no passport control at the state line,” Primus said. “You may have noticed when you passed through from Ohio.”

Several Republican members of Congress said this week that the nation’s refugee program should be suspended. Some want to use a bill for funding the federal government to block President Barack Obama’s plans to boost the flow of Syrian refugees into the United States next year by 10,000.

Congress controls funding for refugee resettlement, and lawmakers at the federal or state levels could withhold financial support affecting the refugees.

The Obama administration said Tuesday it would brief lawmakers this week, in part to dispel what it considers misinformation about the process of admitting refugees.

The White House also held a 90-minute conference call with governors Tuesday. A spokeswoman for Snyder, one of 34 who participated, said he appreciated the discussion and told officials he’d like “more robust data” on the refugee system.

The White House has stressed it conducts rigorous security checks with refugee applicants, rejecting allegations that too little data exists on Syrians for proper vetting. “There is intelligence on refugee populations, including Syrian refugees,” a senior administration official told reporters on a Tuesday call.

“Iraqis and Syrians tend to be a very, very heavily documented population. And members of families tend to have passports and family registries and military books, and they have a lot of information in most instances.”

While federal officials administer the refugee resettlement process, they work with state and local communities to determine, for example, how many refugees that resettlement agencies in a particular area can handle.

Fratzke added that officials “wouldn’t want to resettle people to a community where they wouldn’t have access to support programs, so there are things that state governments could do to make the process more difficult for the resettlement agencies.”

Individual states could make it harder for refugees by refusing to assist in housing, job placement, language education and social services, Primus said.

“States could, in principle, say ‘We’re shutting down the resettlement agencies,’ ” he said.

But the states would have to block access to social service agencies for all refugees, not just those from one nation or region of the world, Primus said.

“If they say we will help refugees of Country X and not Country Y, they’re trying to make foreign policy — and that the courts will not let them do,” the law professor said.

Snyder has not suggested Michigan will deny refugees access to the state’s social safety net.

David Bier, director of immigration policy at the Niskanen Center, a libertarian policy group, said that if states withhold financial support, the federal government could step in and work with nonprofits to provide similar services.

He said the backlash against refugees is misguided. While one of the Paris attackers might have made it to France in a wave of migrants, the individual was not a “refugee.”

“It’s not like there’s a vetting process by which these people come to Europe. They just show up there in boats or on foot. Only after that is their application made to become an asylum seeker in Europe,” Bier said. “Refugees coming to the U.S. have already been vetted by the time they get here — a process that takes years to complete.”

Notably, applying for refugee status is the hardest and slowest way to come to the United States, Bier added. Would-be terrorists have used quicker ways to enter the country that involve fewer security and background checks, such as student and tourist visas.

Stephanie Nawyn, a sociology professor at Michigan State University, predicted the Paris attacks will prompt a slowdown or freeze on U.S. refugee admission, as occurred after the Sept. 11, 2001, terrorist attacks.

“What governors and state legislators do is not going to have an impact on that,” Nawyn said. “What it will have an impact on is the Islamophobic violence that will likely increase, and violent acts of nativism and hostility toward immigrants and refugees.”