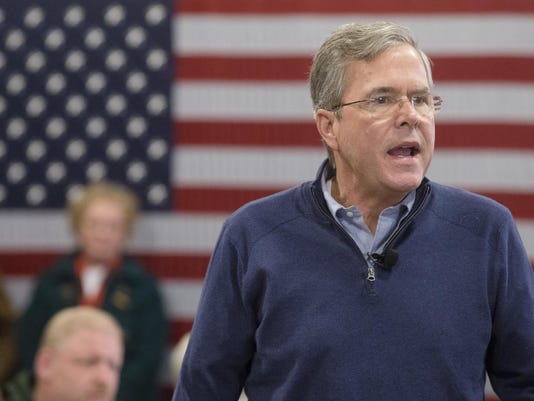 Bush, whose presidential campaign continues to struggle in the crowded GOP primary field, was asked about the crisis in Flint during an appearance Sunday morning on ABC’s “This Week” political talk show.

Snyder has “taken responsibility. And I admire that,” Bush said. “He’s not saying that it’s someone else’s fault. He's rolling up his sleeves and trying to — trying to deal with this.”

Bush’s comments on the TV show were the strongest defense to date by a GOP presidential candidate of Snyder’s response to Flint’s water crisis in the face of national attention and scrutiny.

Other GOP White House hopefuls have commented on the documented breakdown in communications between federal, state and local government agencies.

“It’s a shame what’s happening in Flint, Michigan,” GOP frontrunner Donald Trump told reporters in Winterset, Iowa in brief remarks about the crisis, according to Reuters. “A thing like that shouldn’t happen. ... They’ve got a very difficult problem, and I know the governor’s got a very difficult time going. But you know, I shouldn’t be commenting on Flint.”

In Iowa on Monday, Florida Sen. Marco Rubio, told a Detroit News reporter he had not been briefed on Flint’s water problems that have been in the national news since Snyder declared a state of emergency on Jan. 5 and declined to comment. After getting briefed on the issue, Rubio told reporters in Manchester, N.H. on Wednesday that the lead poisoning of Flint residents was the result of “a systemic and ugly breakdown at the local and state level,” NBC News reported.

By contrast, Democratic presidential frontrunner Hillary Clinton has railed against Snyder’s response to the crisis for the past two weeks and her chief rival, Vermont Sen. Bernie Sanders, has called for Snyder to resign over what he called “one of the worst public health crises in the modern history of this country.”

On ABC Sunday, Bush said the crisis in Flint exposes the need for “a 21st Century system of rules” to ensure water quality problems are identified and made public earlier.

State and federal regulators have acknowledged they both failed to require Flint to add corrosion control chemicals to its river water from April 2014 to October 2015 that could have prevented toxic lead metal in old iron pipes from leaching into the city’s drinking water supply.

“It is horrific and it is related to the fact that we’ve created this complex, no-responsibility regulatory system, where the federal government, the state government, a regional government, local and county governments are all pointing fingers at one another,” Bush said.

ABC anchor Martha Raddatz asked Bush if Snyder should resign from office, according to a transcript.

“No, he needs to do what he’s doing, which is to accept responsibility and begin to solve the problem,” Bush said.

Snyder has faulted employees at the DEQ for not using “common sense” and on Friday his administration suspended two unnamed DEQ employees without pay pending the outcome of an internal investigation that could take weeks to complete.

Snyder, who won a second term in November 2014 and has not endorsed a GOP candidate for president, has “been a great governor for Michigan,” Bush said.

“Michigan was on its knees when he became governor and he’s led to a rebound and forged consensus and I think he’s doing a good job in that regard,” Bush said. “This is a tragedy that we ought to focus; instead of blaming people, what he’s doing is creating a strategy to fix it because it is a complete disaster.”

After the interview with Bush, former Michigan Gov. Jennifer Granholm appeared on “This Week” as a commentator.

Granholm, a Democrat who now resides in California, referenced the Flint water crisis while commenting on Sanders’ call for a political revolution in his campaign battle against Clinton for the Democratic presidential nomination.

“But there is a mom in Flint who is not going to wait for the revolution to be able to give her child clean water,” said Granholm, who is supporting Clinton for president.