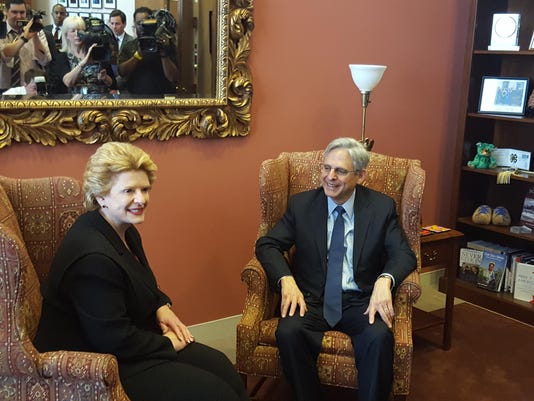 Washington — Sen. Debbie Stabenow, D-Lansing, met with President Obama's Supreme Court nominee, Merrick Garland, on Tuesday as part of the White House’s push to pressure Senate Republicans to take up the nomination in the midst of a heated presidential election.

The Lansing Democrat said Tuesday afternoon Garland was “incredibly impressive” in their approximately 38-minute meeting in her Senate office.

“He clearly is somebody that is incredibly competent and brings a breadth and a wealth of experience to the job,” Stabenow told reporters after the meeting.

The senior senator from Michigan said she is “absolutely” planning to support Garland’s nomination if it is ever brought up for a vote in the Senate.

“I was inclined (to support Garland) before we met, and now I am 100 percent,” she said.

Senate Republicans have thus far refused to hold a hearing for Garland, who would replace conservative hero Antonin Scalia on the Supreme Court. They argue the choice should be made instead by the next president after voters have weighed in during the November election.

Democrats have accused Republicans of ignoring their constitutional responsibilities to consider the sitting president’s nominee.

Garland, the chief judge on the U.S. Court of Appeals for the District of Columbia Circuit, has been meeting with mostly Democratic senators as part of the White House’s strategy to ratchet up pressure on Republicans to reverse course on his nomination.

Stabenow said Republicans should meet with Garland like she did on Tuesday and then convene a hearing on his nomination “so the American people can judge for themselves.

“It’s clear to me that if he is given a vote in the United States Senate, it would be very hard to vote against such an incredibly qualified man,” she said.

Garland did not speak to reporters before or after his meeting with Stabenow, but the Lansing Democrat said they talked at length about his role in investigating the 1995 bombing of a federal office building in Oklahoma City. Tuesday was the 21st anniversary of the tragedy.

Garland served as prosecutor in the Oklahoma City bombing investigation as then-deputy attorney general in the Clinton administration.

Stabenow said Garland “walked through what it was like putting together all of the elements of the investigative teams and working with the attorneys and overseeing the investigation.

“It was extremely impressive to hear what he was talking about, and also very moving hearing him talk about what it was like coming into Oklahoma City and seeing all the destruction and then the investigation that they did,” she said.

Stabenow added that her discussion with the Supreme Court nominee also turned to the importance of following legal precedents in judicial decision-making.

“Obviously we didn’t talk about individual decisions, but we talked about the way he approaches decisions, the role of the judiciary, the importance of being nonpartisan, the importance of consistency, the fact that we in our daily lives count on the law being consistent so that we can make decisions in our lives or in our business,” she said.