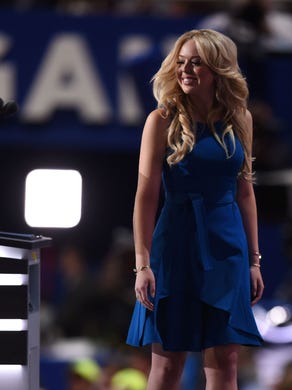 A delegate listens to speakers on the second day of the Republican National Convention. Chip Somodevilla, Getty Images
Fullscreen

Donald Trump Jr., second to the left, along with Ivanka Trump, Eric Trump and Tiffany Trump are part of the New York roll call in support of Republican presidential candidate Donald Trump on the second day of the Republican National Convention on Tuesday, July 19, 2016 at the Quicken Loans Arena in Cleveland, Ohio. Joe Raedle, Getty Images
Fullscreen

The large television monitor announces after the New York delegation casts their votes that Donald Trump has enough votes to become the nominee of the Republican Party for President of the United States. Mark J. Terrill, AP
Fullscreen

Donald Trump Jr., son of of Republican presidential candidate Donald Trump, talks to a reporter after his sound check. He will be one of the prime time speakers. Carolyn Kaster, AP
Fullscreen

Speaker Paul Ryan of Wisconsin, puts bunny ears behind the heads of participants in a group photo before the start of the second day of the Republican National Convention. J. Scott Applewhite, AP
Fullscreen

Geert Wilders, leader of the right wing Dutch Party for Freedom, speaks to the media prior to the start of the second day of the convention. Alex Wong, Getty Images
Fullscreen

A man wears a boot on his head on the second day of the convention. Brendan Smialowski, AFP/Getty Images
Fullscreen

Members of the media photograph the police at a protest near the site of the Republican National Convention in downtown Cleveland. Spencer Platt, Getty Images
Fullscreen

People standing on the main stage are reflected in curved mirrors before the start of the second day of the convention. Robyn Beck, AFP/Getty Images
Fullscreen

Campaign souvenirs are seen on the second day of the convention. John Moore, Getty Images
Fullscreen

Police officers stand guard with assault rifles at the Public Square in downtown on the second day of the 2016 Republican National Convention in Cleveland. Marcus Yam, TNS
Fullscreen

Cleveland — Donald Trump’s son Donald Jr. cited his father’s business acumen and said that for his father, “impossible is just the starting point.” He was one of Trump's two children to testify to his character in Republican National Convention speeches, casting him as a man undeterred by challenges.

The younger Trump told delegates that his father approaches business projects the same way he has approached his campaign and life in general.

Donald Jr. said that’s why his father was able to defeat 16 other Republicans in the primary campaign, despite never having run for office.

He said the question in this election is who has the judgment to lead. He says Democrat Hilary Clinton is a risk the country can’t afford to take.

Chants of 'lock her up'

Republicans broke out into chants of “lock her up” as New Jersey Gov. Chris Christie tried to impugn Hillary Clinton’s character in his speech to the RNC.

Christie says as a former federal prosecutor, he wants to hold Clinton accountable for her actions. He laid out what he says are facts about her to “a jury of her peers.”

Guilty or not guilty — that’s what Christie said in asking his audience for a verdict about Clinton on her leadership on the Islamic State group, China, and an al-Qaida-linked group in Nigeria.

Each time, delegates responded with boisterous chants of “guilty.”

Republican activists repeatedly interrupted Christie with shouts of — “Lock her up.”

Christie said Clinton lied to the nation about “her selfish, awful judgment.”

Christie — who fell short in his GOP presidential bid — says voters shouldn’t elect Clinton as president and reward what he calls her incompetence.

Christie is firmly behind Trump — and says he’s been friends with Trump for 14 years.

Christie tells the Republican National Convention that Clinton’s performance as secretary of state was dismal. He says voters should hold her accountable for failures in Libya, Syria and elsewhere.

Christie says Clinton also is responsible for a bad nuclear deal with Iran.

Trump addressed the convention briefly in videotaped remarks, thanking them for formally nominating him as the party’s White House candidate. “

“This is a movement, but we have to go all the way,” he said.

For Trump, the celebrations were a much-needed opportunity to regroup after a chaotic convention kickoff that included a plagiarism charge involving wife Melania Trump’s address on opening night. There were no big missteps Tuesday, but the event was void of the glitzy, Hollywood touch Trump promised, with a series of Republican officials parading on stage to level sharp, but repetitive, criticisms of Clinton.

The evening’s program ended on an unusual note, with an actress-turned-avocado farmer, Kimberlin Brown, delivering the closing speech — a spot normally reserved for prominent speakers.

Others talk tough on Clinton

McConnell said Clinton has “a tortured relationship to the truth.”

Ryan said Clinton represents a third term of Obama’s presidency instead of the “clean break from a failed system” that many Americans want.

The Wisconsin Republican says next week’s Democratic convention will be a “four-day infomercial of politically correct moralizing.”

Tiffany Trump says her father, Donald Trump, is a “natural-born encourager” who’s motivated her to work her hardest.

The 22-year-old told  the Republican National Convention about her father’s character, and recalling how he’d write notes on her report cards. She says she still has them.

Tiffany Trump says the Trump way is to hold nothing back and never let fear get in the way. She says he’s the last person who’d ever tell someone to lower their sights or give up on their dream.