The PAC is dedicated to overturning the Supreme Court decision that removed limits on independent expenditure groups. 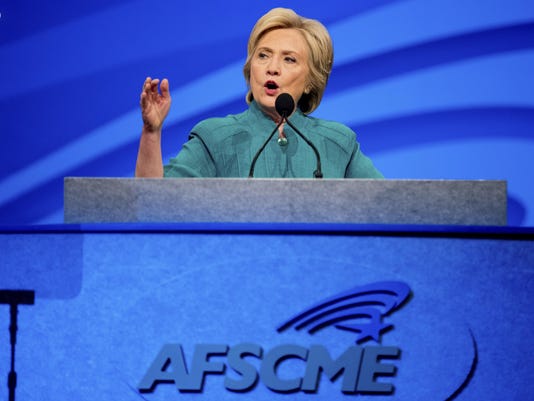 End Citizens United PAC, which is dedicated to overturning the Supreme Court decision that removed limits on independent expenditure groups, announced its support for Clinton, despite many super PACs raising money for the presumptive Democratic nominee.(Photo: Andrew Harnik / AP)

Washington — A political action committee dedicated to limiting the influence of outside money has endorsed Hillary Clinton, despite many super PACs raising money for the presumptive Democratic nominee.

End Citizens United PAC, which is dedicated to overturning the Supreme Court decision that removed limits on independent expenditure groups, announced its support for Clinton.

In the announcement, the group named her support for a constitutional amendment overturning the court decision.

Bozzi also said another potential way for Clinton to bring about change would be to appoint a Supreme Court justice who would support legal action.

Clinton has said she supports a constitutional amendment opposing Citizens United since the earliest days of her campaign.

Still, Bozzi said it is important to have a candidate who supports campaign finance reform from the beginning.

"It's night and day between her and (Donald) Trump and the Republican platform," Bozzi said.

However, Clinton has had her own criticisms from the left on super PACs.

Sen. Bernie Sanders, her chief opponent during the Democratic primary campaign, frequently said he did not have a super PAC backing him up and criticized pro-Clinton super PACs for large amounts of money.

According to the Center for Responsive Politics, outside groups supporting Clinton raised the most outside money of any of the candidates — more than $84.8 million. However, Clinton's official campaign raised more than twice that at $229.3 million.

According to the End Citizens United PAC's most recent Federal Election Commission filing, most of its donations came in small contributions.

In a campaign statement, Clinton thanked the organization and laid out specific policies to reform campaign finance.

"I will appoint Supreme Court justices who understand that this decision deeply hurt our democracy," the statement read. "I will fight for other progressive reforms to our campaign finance system, including more robust disclosure requirements, and measures that will make it easier for people who aren't rich or well-connected to run for office, like small-donor matching."