Email revelations anger some in Sanders camp, who call on Vermont senator to withdraw his endorsement of Hillary Clinton 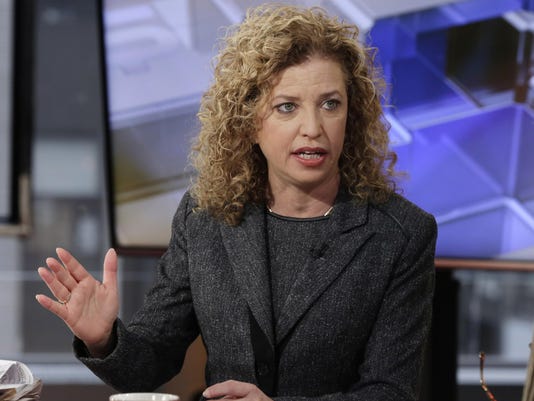 A trove of internal emails released Friday by WikiLeaks showed Democratic National Convention officials belittling the Sanders campaign and, in one instance, questioning his Jewish background and whether they could get someone to publicly ask if he is an atheist. The DNC’s bias toward Clinton angered some Michigan Sanders’ delegates, one of whom said the Vermont U.S. senator should withdraw his endorsement of Clinton.

Wasserman Schultz’s stunning announcement came on the eve of the convention here, where Clinton is set to accept the party’s nomination. In a statement, Wasserman Schultz said she will still open and close the convention to “address our delegates about the stakes involved in this election not only for Democrats, but for all Americans.”

Sanders’ should “take a stand” and withdraw his endorsement of Clinton because of the emails, said Michigan Sanders delegate Bruce Fealk of Rochester Hills, arguing they prove the party tipped the scales to ensure her nomination.

“Of course it was rigged,” Fealk said of the Democratic primary season, which saw Sanders score a narrow upset victory in Michigan but ultimately fall short of Clinton in pledged delegates. “We knew it all along and now we have proof.”

Fellow Sanders delegate Leesha Feegan of Grand Rapids said she thinks Clinton should forfeit the nomination or ask the party should “redo” the Democratic primary.

“That is the only fair way to go forward with this election,” Feegan said Sunday.

U.S. Rep. Dan Kildee, D-Flint Township, commended Wasserman Schultz for stepping down and said he hopes the move will help the party move past internal divisions.

“I don’t think it’s rigging, but I think there’s some people who are guilty of stupidity, that’s for sure,” Kildee said Sunday evening at a convention kick-off party hosted by Detroit Mayor Mike Duggan and Wane County Executive Warren Evans.

“The campaign was a fair one,” said Kildee, a Clinton delegate. “People went out and voted for who they wanted to vote for. Young staffers at the DNC may flatter themselves to think they can affect the outcome, but it’s up to the voters.”

Sanders earlier Sunday told CNN the emails are “outrageous but not a great shock.” He previously alleged party collusion and renewed his call for Wasserman Schultz to step down.

The self-described democratic socialist has endorsed Clinton and is expected to speak at the convention Monday night during a “united together” program. But Sanders has not officially ended his campaign and has told his delegates to prepare for a record roll call vote, suggesting he will not move to make Clinton’s nomination unanimous by acclimation as she did eight years ago for President Barack Obama.

His campaign is also hosting a series of convention workshops to discuss how delegates can “move forward the political revolution” and continue to promote his proposals, including a “Medicare for all” government-funded, single-payer health care system and opposition to potential ratification of the Trans Pacific Partnership trade deal.

Some Sanders’ delegates from Michigan said they remained unsure whether they will vote for Clinton in November, while others are prepared to back her in an attempt to prevent Republican nominee Donald Trump from winning the general election.

“I’m not on board with Hillary at this point,” Fealk said. “I don’t know what’s going to happen. Bernie is playing chess, and I think there’s a reason he didn’t concede.”

Sanders supporters hoping to move Clinton further to the political left have celebrated pending changes to the party platform and a new rule that could minimize the role of super delegates in future elections. But they were generally unimpressed by her selection of Virginia U.S. Sen. Tim Kaine as her running mate over more liberal prospects such as Massachusetts U.S. Sen. Elizabeth Warren.

The convention’s rules committee on Saturday approved a “unity” resolution to create a new commission on super delegates – mostly elected officials whose early support gave Clinton momentum as she went on to also win more pledged delegates than Sanders.

Under a tentative proposal that would not apply to this year’s convention, roughly two-thirds of all super delegates would be required to vote in accordance with the outcome of their state’s primary or caucus.

“I think it’s a major step in the right direction,” said Ian Robinson of Ann Arbor, a Sanders’ delegate on the rules committee who added he hopes the compromise will help ease tensions between Sanders and Clinton delegates.

The Michigan Democrat Party held “unity events” this month in Grand Rapids and Royal Oak, inviting Clinton and Sanders delegates to meet each other before heading to Philadelphia. And Michigan for Hillary said it is holding a watch party Monday in Troy for supporters “to kick off a united convention.”

Mark LaChey, a Sanders delegate from Saugatuck, is ready to vote for Clinton over Trump in the general election — after he votes for Sanders at the convention.

“I’m gratified to see that where Hillary Clinton is now on issues is much different than when she started her campaign, so that dovetails with why I’m happy to support her,” said LaChey, who chairs the Michigan Democratic Party’s LGBT and Allies Caucus. “Her positions now on a variety of issues have moved much closer to Bernie’s.”

Clinton this month announced a new proposal to provide tuition-free college for students whose families earn less than $125,000 a year, an income-capped version of the university plan Sanders touted during the primaries.

The proposed modified The Democratic Party platform includes several nods to Sanders, including abolishment of the death penalty and calls for a $15-an-hour minimum wage. The federal minimum wage is $7.25 an hour, while the Michigan rate is $8.50.

The result is “the most progressive platform, by far, in the history of the Democratic Party,” Sanders said.

But Clinton delegates outnumbered Sanders delegates on the platform committee and largely controlled the amendment process. It frustrated delegates such as Lena Thompson of Detroit, who said her camp’s most substantive impromptu victory was securing language calling for a path toward marijuana legalization.

Sanders’ backers failed to add language to the platform specifically opposing the TPP. The amendment could have potentially embarrassed President Barack Obama, who supports the 12-country trade agreement opposed by both Clinton and Sanders.

“It was dead on arrival,” said Abby Dart of Ann Arbor, a Sanders delegate on the platform panel. “We didn’t get the strong language we wanted.”

Despite the loss, Dart said Sanders’ forces earned significant victories during the platform development process and argues many supporters will get over their disappointment and back Clinton this fall.

“I am in the camp to take what Bernie is pushing, which is to elect Hillary Clinton and do everything we can to defeat Donald Trump,” she said.

But divisions among platform committee members were exposed when Clinton delegates proposed a last-minute “unity” amendment that would have written her name into the party document.

Sanders delegates were blindsided by the proposal, prompting a temporary pause in committee work and chants of “withdraw” before the proposed amendment was eventually withdrawn.

Thompson called the presidential nominating process “rigged” and declined to say whether she will vote for Clinton in the fall.