Clinton to nation: It’s a ‘moment of reckoning’

Clinton to nation: It’s a ‘moment of reckoning’ 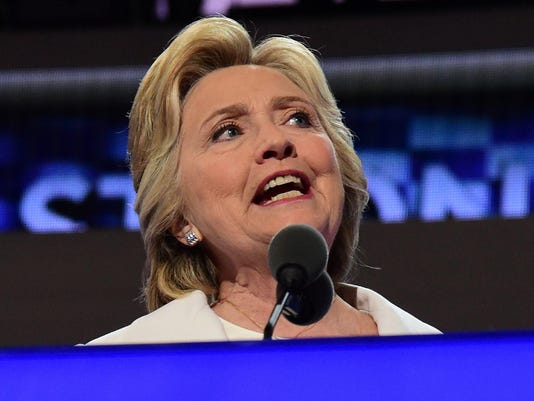 Philadelphia — Hillary Clinton capped a four-day convention celebration with a plea for national unity and tolerance. Now, one of the most divisive and distrusted figures in American politics must convince voters that she, rather than Republican rival Donald Trump, can bring a deeply divided nation together.

“America is once again at a moment of reckoning. Powerful forces are threatening to pull us apart,” Clinton said to a rapt Democratic convention audience. “And just as with our founders, there are no guarantees. It truly is up to us. We have to decide whether we all will work together so we all can rise together.”

After a convention speech aimed squarely at undercutting Trump, the first female presidential nominee embarks on a bus tour through two Rust Belt battlegrounds, Ohio and Pennsylvania. The shoot-from-the-hip billionaire believes he can make headway in those states with blue-collar white men, a demographic that has eluded Clinton and was unlikely to be swayed by a convention that heavily celebrated racial and gender diversity.

Trump’s tweeted response to Clinton’s speech captured his pitch to those voters. He slammed the former secretary of state as an ineffectual defender against terrorism and blasted her judgment.

“Hillary’s vision is a borderless world where working people have no power, no jobs, no safety,” he wrote.

Starting with a rally Friday at Temple University, Clinton, accompanied by running mate Sen. Tim Kaine and their spouses, will focus on economic opportunity, diversity and national security, themes hammered home this week by an array of politicians, celebrities, gun-violence victims, law enforcement officers, and activists of all sexualities and races.

Their goal is to turn out the coalition of minority, female and young voters that twice elected President Barack Obama while offsetting expected losses among the white male voters drawn to Trump’s message.

Democrats contrasted their optimistic, policy-laden message with the darker vision and less specific platform that marked Trump’s turn during the Republican convention a week earlier. Trump is offering “empty promises,” Clinton said, while she has a bold agenda “to keep you safe, to get you good jobs, and to give your kids the opportunities they deserve.”

Selling that message will depend on whether Clinton can reach voters walled off by long-standing distrust. Despite her decades on the public stage, many know Clinton as much from Republican attacks as her resume, a fact Clinton confronted head-on: “I get it that some people just don’t know what to make of me, so let me tell you.”

The stakes are high: A loss to Trump would not only end Clinton’s political career, it could be a devastating coda to her and her husband’s political legacy and leave the Democratic Party weaker than it has been in a generation.

The event was meticulously designed to craft her image as a caring grandmother tough enough to battle terrorists and unite a party still unsettled by a fractious primary process. Clinton, who aides say spent weeks working on her address, saw the speech as a major opportunity to answer what her husband called the “cartoon alternative.”

Lacking Obama’s sweeping rhetoric or the “feel-your-pain” sensitivity of her husband, Clinton leaned into her wonky image, saying: “I sweat the details of policy.”

And Clinton offered an open hand to backers of Vermont Sen. Bernie Sanders, saying: “I’ve heard you. Your cause is our cause.”

Yet resentments lingered throughout the convention, with a handful of attendees heckling during her address others wearing neon shirts in protest. One held a bright red sign that stood out among the sea of flags and campaign placards: “Keep your promises.”

Throughout the convention, Democrats tried to convey the stakes of the election not only to Sanders backers but Republicans concerned about Trump’s bombastic tone and foreign policy positions.

Speaker after speaker cast Trump as intolerant, inexperienced and dangerous, including the Pakistan-born immigrant father of a Muslim-American soldier killed in Iraq, who held up a copy of the Constitution and insisted that Trump “has sacrificed nothing.”

In a first for a Democratic convention, a number of Republican economic and foreign policy leaders hammered home the point.

Asserting Clinton’s national security capabilities were a group of military leaders, including retired Gen. John Allen, the former deputy commander of the wars in the Middle East, who called Clinton the kind of “commander in chief America needs.”