Trump to black voters: 'What do you have to lose?'

Trump to black voters: 'What do you have to lose?'

Donald Trump addresses the crowd during a campaign event Friday, Aug. 19, 2016, at the Summit in Lansing. Dale G. Young, The Detroit News
Fullscreen

Republican presidential candidate Donald Trump sought to appeal Friday to African-American voters who typically side with Democrats before a nearly all white crowd at a sports complex. Making remarks directed at African-American voters, Trump asked: “What do you have to lose by trying something new, like Trump?” Dale G. Young, The Detroit News
Fullscreen

Donald Trump tosses a signed hat to a fan after he addressed the crowd during a campaign event Friday, Aug. 19, 2016 at the Summit in Lansing. Dale G. Young, The Detroit News
Fullscreen

Fans try to get a picture of their favorite candidate after Donald Trump addressed the crowd. Dale G. Young, The Detroit News
Fullscreen

Fans with cellphones in the air surround a little girl on her father's shoulders as Donald Trump addresses the crowd. Dale G. Young, The Detroit News
Fullscreen

With a pistol on her hip, Libertarian candidate for Michigan's 62nd house district, Michelle Gregoire of Battle Creek demonstrates against Trump before the GOP candidate event. Dale G. Young, The Detroit News
Fullscreen

Donald Trump is surrounded by a sea of supporters hold signs as he gives a speech. Dale G. Young, The Detroit News
Fullscreen

Donald Trump gives a speech to the crowd in the Summit sports complex. Dale G. Young, The Detroit News
Fullscreen

Donald Trump waves to the crowd and applauds them at the Summit in Lansing. Dale G. Young, The Detroit News
Fullscreen 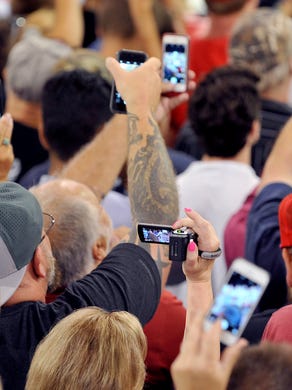 Fans with phones and cameras vie for the best shot as Donald Trump addresses the crowd. Dale G. Young, The Detroit News
Fullscreen

Donald Trump addresses the crowd during a campaign event Friday, Aug 19, 2016 at the Summit in Lansing.(Photo: Dale G. Young / The Detroit News)Buy Photo

Dimondale — Republican presidential candidate Donald Trump sought to appeal Friday to African-American voters who typically side with Democrats, making a pitch for their support before a nearly all-white crowd at a sports complex.

Making remarks directed at black voters, he asked: “What do you have to lose by trying something new, like Trump?” He referred to Detroit’s high rates of poverty and violent crime and promised he would do better.

The New York businessman said black voters possibly could do “worse” than they have under President Barack Obama if they instead choose Democrat Hillary Clinton, who focused her efforts in Michigan’s March 8 primary on turning out African-American voters in Detroit and Flint but lost narrowly to U.S. Sen. Bernie Sanders of Vermont.

“One thing we know for sure is that if you keep voting for the same people, you will keep getting the same, exactly the same result,” Trump said.

There were a handful of African-Americans and people of color in a crowd of at least 3,000 at The Summit Sports and Ice Complex in Dimondale, a bedroom community of Lansing in Eaton County. Kendrick Hodge, one of the few African-Americans who attended the rally, rejected claims by Democrats that Trump is a racist.

“What has he’s done that’s racist? What has he done that’s bigoted?” asked Hodge, a 40-year-old computer programmer from Lansing. “Just because other people say it don’t mean you repeat it. You’ve gotta have some proof.”

Hodge said Democrats offer black voters “a lot of talk, but no action.”

“They talk enough to get your vote and once they’ve got your vote they’re just back to the same old, same old,” he said.

Trump offered no specific policies for helping raise poor blacks out of poverty, other than his continued vow to walk away from international trade agreements that he argues have damaged the manufacturing base of cities like Detroit. He also criticized Clinton’s willingness to allow more refugees from Syria, a war-torn country facing a humanitarian crisis.

“Hillary Clinton would rather provide a job to a refugee from overseas than to give that job to unemployed African-American youth in cities like Detroit, who have become refugees in their own country,” Trump said.

Rev. Kenneth J. Flowers, senior pastor at Greater New Mt. Moriah Missionary Baptist Church in Detroit, said he was outraged by Trump’s remarks, particularly the businessman’s claim that blacks have “nothing to lose” by voting for him.

The real estate developer made his second trip to Michigan in two weeks, another sign he isn’t giving up on winning a state where he feels his stances have widespread appeal.
A July 30-Aug. 1 Detroit News-WDIV poll of 600 likely November voters showed Clinton had widened her lead over Trump to 9 percentage points in Michigan.

The 41-minute speech was filled with Trump’s populist message about reversing lost jobs and stopping corruption. But much of Trump’s remarks about Detroit were a repeat from his Aug. 8 speech before the Detroit Economic Club, where he blamed Democratic politicians and policies for leading to 40 percent of Detroiters living in poverty.

If elected president, Trump predicted he would get “95 percent of the African American vote” in a 2020 re-election campaign.

“Let’s see what happens,” said Ronna Romney McDaniel, chairwoman of the Michigan Republican Party. “We want him to win. Let’s put him to the test.”

McDaniel acknowledged the GOP hasn’t “done well in taking our message into those African American communities and fight for their votes.”

Jamie Anthor of Flint, a 28-year-old who was among a handful of African Americans in the crowd, said Trump’s message resonated with her.

“He’s totally for African Americans and getting them jobs, and I’m searching for a job myself,” she said. “It would just be nice to have someone back us up.”

Although Trump had very little to say about African Americans early in his campaign, he became popular with some white nationalists and did not immediately disavow support from former Klu Klux Klan grand wizard David Duke during the primaries.

“He’s unashamedly presumptive, as though he believes that is the circumstance for all black voters in Michigan and presumes we have nothing else going for us, except to maybe come his way,” Johnson said.

Near the beginning his speech, Trump reflected on his three-hour tour of flood-ravaged Louisiana Friday morning before he came to Michigan.

"Obama ought to get off the golf course and get down there," he said.

The White House has said Obama has received regular updates about the flooding and the federal response during his vacation. Late Friday afternoon before Trump's speech, the White House said Obama would visit Louisiana on Tuesday, indicating he is "eager" to see the damage and "wants to ensure that his presence does not interfere with ongoing recovery efforts."

Trump’s decision to tour the Louisiana flooding — while Obama remains on vacation on Martha’s Vineyard — marks a rare instance in which the businessman has sought to elevate an individual region’s plight.

During the height of Flint’s water crisis this winter, Trump did not come to the city when he was briefly campaigning in the state ahead of the March 8 Republican primary, which he won.

Clinton visited Flint twice this winter and made the city’s lead-contaminated water crisis ground zero for her campaign in Michigan.

Anthor said she does not trust Clinton’s commitment to help resolve the water crisis in her hometown.

“With the emails that came out, I don’t trust a liar. Never have, never will,” Anthor said. “I just hope that all the young people out there vote smart. Don’t vote for her just because she’s a woman.”

The speech came during a week when Trump retooled his campaign staff and started delivering more prepared remarks, ditching his off-the-cuff approach to rally speeches. But the populist theme remained.

“I am the change agent. I am your messenger," he told the Dimondale crowd.

Long lines extended outside the suburban Lansing sports complex ahead of Trump’s speech, with supporters singing the praises of the New York real estate mogul as they browsed at dozens of Trump merchandise tents that began setting up early Friday morning.

Rick Black of Livonia called Trump “the voice of the true silent majority,” although he said he does have concerns that the brash businessman speaks “a little bit too much off the cuff” on occasion.

Black, a retired business owner, said he supports Trump’s calls to build a wall between the United States and Mexico.

“Shut the borders, seal off the country, renegotiate our trade deals and restore America,” he said.

Brenda Filkins, a reading teacher from Charlotte, said she and her husband are supporting Trump because they do not like the direction the country is heading under Obama.

“We’d like to see a change,” Filkins said. “The last kind of change didn’t work for us.”

Critics have argued that Trump is not qualified to be president, but Filkins said she thinks his lack of political experience may be a net positive.

“We’re kind of in a mess right now with people who do have experience with politics, so I think a fresh perspective is a good thing,” she said.

Dave Zemer of Jackson attended the rally in a t-shirt that read “Hillary for prison” on the front, and “I’m not voting for Monica’s ex-boyfriend’s wife,” a reference to the Oval Office sex scandal involving former President Bill Clinton and then-intern Monica Lewinsky.

“I think she’s lying to the American people, and what she’s done with that email scandal is a disgrace,” said Zemer, a small business owner. “The fact that FBI director allowed her to just walk away from the whole situation, I totally disagree with that.”