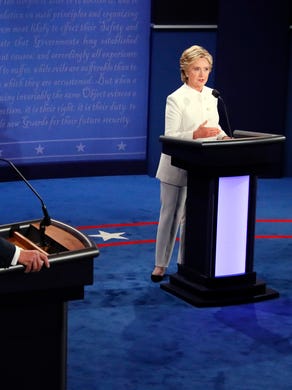 Moderator Chris Wallace of Fox News looks back at the audience before the third presidential debate at UNLV in Las Vegas. John Locher, AP
Fullscreen 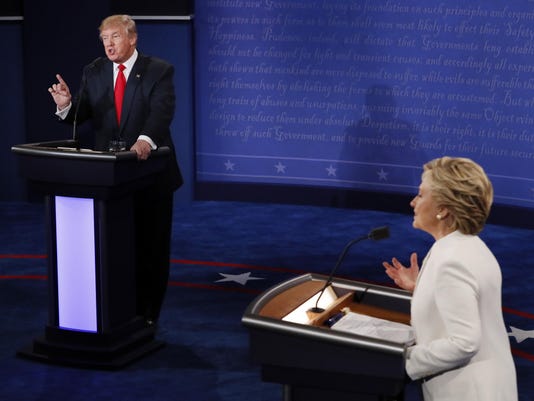 Donald Trump and Hillary Clinton are done sparring — at least on a debate stage.

In their third and final battle on the issues in Las Vegas, the Republican and Democratic presidential nominees talked about abortion, trade, immigration, deleted government emails, Russian espionage and more.

Oh, and Trump refused to say whether he would accept the outcome of the Nov. 8 election, alluding to his recent suggestions that voter fraud and media bias could taint the process.

Read on for the full highlights, lowlights and everything in between.

Debate moderator Chris Wallace of Fox News asked Trump whether he would “absolutely” accept the results of the election.

“I will look at it at the time,” Trump said. “The media is so dishonest, and they poison the minds of the voters. I think the voters are going to see through it. We’ll see.”

While the New York businessman offered no evidence, he claimed that “millions” of people are registered to vote that shouldn’t be. Then he changed the subject.

“She’s guilty of a crime, and she never should have been allowed to run for the presidency … based on what she’s done with emails and other things,” Trump said of Clinton and the deletion of tens of thousands of congressionally subpoenaed government emails from her home server.

Clinton said it was “horrifying” that Trump would not pledge to honor the outcome of the presidential election.

“This is a mindset. This is how Donald thinks. And it’s funny, but it’s really troubling,” she said. “We’ve had free and fair elections. We’ve accepted the outcomes, even if we might not have liked them. … He’s denigrating — he’s talking down our democracy.”

Clinton, asked about past comments she made about dreaming for “a hemispheric common market, with open trade and open borders,” said she was discussing energy and continues to believe an energy system that crosses borders would be a benefit.

The quote, part of a WikiLeaks release of hacked campaign emails, prompted Clinton to decry the suspected involvement of the Russian government.

“Finally, will Donald Trump admit and denounce the Russians are doing this and make it clear he will not have the help of (President Vladimir) Putin in this election, that he rejects Russian espionage against Americans?” she asked.

Trump called her response a “great pivot,” suggesting she wants “open borders” for refugees, but then said he did not know Putin but would not mind if the United States and Russia developed a better relationship.

Russia has modernized its nuclear arsenal in ways the United States has not, Trump said, and Putin has no respect for Clinton or President Barack Obama.

Clinton retorted: “That’s because he’d rather have a puppet as president of the United States.”

Trump called Clinton “the puppet,” and pressed by moderator Chris Wallace, the New York businessman said he does denounce election interference by any foreign government.

“By Russia or anyone else,” he said. “Of course, I condemn. I don’t know Putin. This is not my best friend, but if the United States got along with Russia, it wouldn’t be so bad. Putin has outsmarted her and Obama at every turn.”

Trump accused Clinton of wanting open borders and wanting to give undocumented immigrants amnesty, which he called “very unfair to all the people that are waiting on line for many, many years.”

“We need strong borders,” he said. “Drugs are pouring in through the border. We have no country if we have the border.”

Trump also emphasized his long-touted promise to build a wall at the border and noted she once supported building a wall.

“One of my first acts will be to get all of the drug lords out of the bad ones — we have some bad bad people in this country,” he said. “They have to go out. But we have some bad hombres here that were going to get them out.”

Clinton said she doesn’t want to rip families apart or send families away from their children.

Trump “said as recently as a few weeks ago in Phoenix that every undocumented person will be subject to deportation. Now, here’s what that means — it means you would have to have a massive law enforcement presence where law enforcement officers would be going school to school, home to home, business to business, rounding up people who are undocumented and we would then have to put them on trains, on buses to get them out of our country,” Clinton said.

The former secretary of state said she’s in favor of border security and a more comprehensive immigration reform plan that would include “getting rid of any violent person — anybody who should be deported we should deport them.”

Clinton later said Trump “choked” when he met with the Mexican president and didn’t raise the issue of Mexico paying for the wall, which he’s promised.

Clinton sidestepped a question over whether the Clinton Foundation was used by foreign governments for “pay to play” access to her office as secretary of state, calling it “a world-renowned charity” that she is proud of.

“There’s no evidence (of pay-to-play), but there is a lot of evidence about the very good work” the foundation has done, she said.

Trump interjected, calling it a “criminal enterprise” and questioned the millions of dollars in contributions from foreign interests.

Clinton responded by knocking the Trump Foundation, which has also faced questions over appropriate spending.

The Trump Foundation “took money from other people and bought a six-foot portrait of Donald,” she said. “I mean who does that? It was just astonishing.”

In mid-August, as criticism mounted about some donations given to his family’s philanthropy, former President Bill Clinton said the Clinton Foundation no longer would accept foreign or corporate money. He also said he would resign from the foundation’s board if his wife wins the election.

Wallace asked Trump why nine women from different circumstances would have all claimed Trump groped or assaulted them over the years.

“Those stories have been largely debunked. I don’t know those people,” the businessman said, suggesting the women are either seeking fame or that Clinton’s “very sleazy” campaign put them up to it.

“Those stories are all false. I didn’t even apologize to my wife, who’s sitting right here, because I didn’t do it,” Trump said.

Clinton noted that Trump has suggested that the women’s claims can’t be true because they aren’t attractive enough to warrant his notice.

She added that the nation needs to “think hard” about what citizens want in their next president.

“America is great because America is good and it really is up to all of us true now and in the future and particularly for our children and grandchildren,” Clinton said.

She added that Trump has demonstrated a pattern of divisiveness and a dark vision of the nation that’s included inciting violence at his rallies.

Republican nominee Donald Trump speaks during the final presidential debate at the Thomas & Mack Center on the campus of the University of Las Vegas in Las Vegas, Nevada on October 19, 2016. (Photo: MARK RALSTON / AFP/Getty Images)

Wallace asked both candidates whether they’d consider a “grand bargain” deal to save both Social Security and Medicare.

Trump didn’t directly answer but called for repealing and replacing “the disaster known as Obamacare” because of the impact the Affordable Care Act has had on businesses.

“It’s probably going to die of its own weight,” he said. “She wants to keep Obamacare, and she wants to make it even worse.”

“That’s part of my commitment to raise taxes on the wealthy. My Social Security payroll contribution will go up — as will Donald’s — assuming he can’t figure out a way to get out of it,” Clinton said.

At this, Trump cut in, saying, “Such a nasty woman.”

If he is given the opportunity to appoint two or three justices to the U.S. Supreme Court, Trump said the new majority on the High Court would overturn Roe v. Wade and the federal guarantee of legal access to abortion.

“That will happen automatically, in my opinion, because I am putting pro-life judges on the court,” he said. Abortion would then “go back to the states” to decide.

Clinton said she does not want to see Roe v. Wade overturned, saying she would defend it, Planned Parenthood and “women’s right to make their own health care decisions.”

“We have come too far to have that turn back now,” she said. “I could just not be more opposed to that kind of thinking.”

Clinton said she voted against a ban on partial-term abortion in the U.S. Senate because it did not allow exceptions for the health of the mother.

Clinton said it is not what happens in late-term cases involving the health of the mother, saying Trump’s “rhetoric is just terribly unfortunate.”

“You should meet some of these women,” she said. “This is the worst possible decision that any woman and her family have to make, and I do not believe the government should be making it.”

More from the debate:

Fact check: What the candidates got wrong