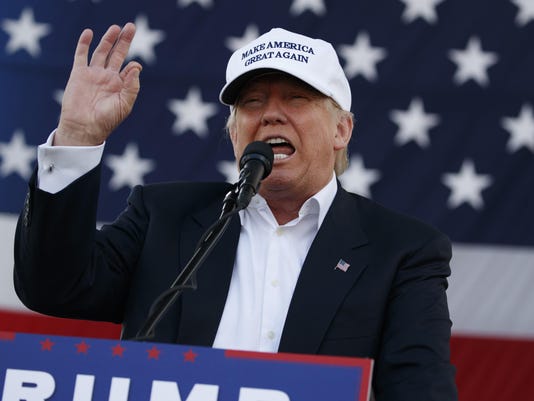 Republican presidential candidate Donald Trump speaks during a campaign rally in Miami on Wednesday. Michigan Republicans are hoping he returns to the state before Election Day.(Photo: Evan Vucci / AP)

Donald Trump plans to campaign in Michigan in each of the final two days of the presidential election, starting with a rally Sunday evening at the Freedom Hill Amphitheater in Sterling Heights and concluding with a late Monday night rally in Grand Rapids.

The Trump campaign added the stop in the Republican stronghold of west Michigan on Saturday night in response to Democrat Hillary Clinton’s campaign announcing she’s coming to Grand Rapids on Monday afternoon, while President Barack Obama will rally Clinton supporters that morning in Ann Arbor.

“This shows the Clinton campaign is seeing the exact same thing we are – that Mr. Trump’s message of renegotiating bad trade deals and bringing back American jobs is moving Michigan into the toss-up category,” Miller said Satuday in a statement. “It’s truly remarkable the Clinton campaign is burning their final chip with President Obama by sending him into a state long viewed as deep blue, and this is yet another indication of how strong this movement is boosting Mr. Trump.”

Obama won Michigan by 9.5 percentage points in 2012 over former Massachusetts Gov. Mitt Romney, a native of Oakland County. In 2008, Obama carried Michigan with an even larer margin of victory of 16 percent over Arizona Sen. John McCain.

Trump’s campaign on Saturday scheduled a 6 p.m. rally Sunday at the outdoor concert venue in Sterling Heights. Doors open at 3 p.m. and free tickets can be reserved on the Trump campaign website.

Clinton in Detroit: ‘Our progress is on the line’

The rally will be Trump’s second visit to Macomb County in the past week following a large rally he held Monday at Macomb Community College’s southern campus in Warren.

Trump’s Monday night stop in Grand Rapids comes on the heels of a rally he held this past Monday at the DeltaPlex arena in Walker, just outside the Grand Rapids city limits.

“What Donald Trump has consistently believed is he could put a state like Michigan in play,” said former U.S. Rep. Pete Hoekstra, a Holland Republican and co-chair of Trump’s Michigan campaign. “I’m expecting that on a Sunday night, 36 hours before the polls open, we will have a big turnout for him.”

Macomb County is seen as a critical battleground for Trump to pick off union support from Clinton and attract the storied Reagan Democrats to the polls on Tuesday.

Pannebecker said he personally urged Trump to come to Freedom Hill prior to the real estate mogul’s Sept. 30 rally in Novi.

“What better place to have it than Freedom Hill and celebrate our independence?” Lucido said. “Give us back our country.”

Heading into the final weekend of the campaign, Clinton was maintaining a five percentage point lead over Trump in RealClearPolitics.com’s average of statewide polls. Trump and his campaign have insisted the race is statistically even.

Pollster Richard Czuba was “baffled” by the Trump campaign’s decision to return to Macomb County when Trump’s electoral hopes may still depend on how well he performs in the suburban enclaves of neighboring Oakland County.

“He’s winning Macomb County by a decent margin, but he’s getting clobbered in Oakland County,” said Czuba, president of the Lansing-based Glengariff Group Inc. polling firm. “It’s almost as if they have a bizarre aversion to Oakland County and campaigning among Republican women in Oakland County, which is where he’s having problems.”

Michigan Republicans had been hoping to get another visit from Trump before Election Day as they try to stop rival Hillary Clinton from extending a Democratic presidential candidate winning streak in the state dating back to her husband’s 1992 victory.

Clinton rallied more than 4,000 supporters Friday evening at Detroit’s Eastern Market. Clinton’s trip to Michigan’s largest city and a Democratic stronghold underscored how competitive the race for Michigan has become in the final days of the campaign.

Trump’s published Sunday schedule shows the New York businessman plans to hold rallies early Sunday afternoon in western Iowa, mid-afternoon at a Minneapolis airport hangar and at 8 p.m. in suburban Pittsburgh. The Associated Press reported Saturday that a previously slated Sunday late-afternoon rally in Milwaukee is being canceled because of a scheduling conflict.

On Monday, Trump has an 8 p.m. rally in Manchester, New Hamphire before he will fly to Grand Rapids.

Trump has been trying to play offense against Clinton in Michigan all week, starting with two large rallies in Grand Rapids and Warren and followed by a blitz of visits by his children and other campaign surrogates that are expected to continue through Monday.

On Monday, Trump's daughters Ivanka and Tiffany Trump will head to west Michigan on Monday for a roundtable discussion with women and community forum in Hudsonville. Ivanka Trump held a similar event Wednesday night in Troy.

Donald Trump Jr. and Eric Trump also campaigned in the state this past week -- and the oldest Trump son is headed back to Michigan on Monday.

On Monday, Donald Trump Jr., will stop into Rubs BBQ Pub on West Adams Avenue in Detroit at 2:30 p.m. Monday and then hold a campaign event for his father at 4 p.m. at the Ukrainian Cultural Center on Ryan Road in Warren.

The vice presidential candidate’s stops Thursday in Kalamazoo County, Friday in Lansing and Saturday in west Michigan were seen as efforts to boost turnout among Republicans, some of whom have been turned off by Trump’s White House campaign.

“In securing their base, they’re not reaching out to independents and that’s the only way they can overcome this four or five point gap,” Czuba said. “There doesn’t seem to be any concerted effort in Oakland County or western Wayne (County).”