Half of Detroit votes may be ineligible for recount

Half of Detroit votes may be ineligible for recount 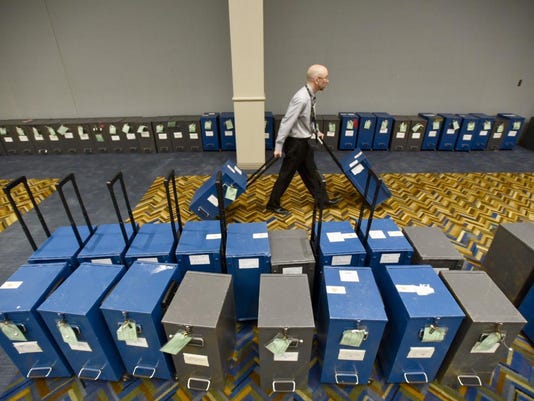 One-third of precincts in Wayne County could be disqualified from an unprecedented statewide recount of presidential election results because of problems with ballots.

Most of those are in heavily Democratic Detroit, where the number of ballots in precinct poll books did not match those of voting machine printout reports in 59 percent of precincts, 392 of 662.

According to state law, precincts whose poll books don’t match with ballots can’t be recounted. If that happens, original election results stand.

“It’s not good,” conceded Daniel Baxter, elections director for the city of Detroit.

He blamed the discrepancies on the city’s decade-old voting machines, saying 87 optical scanners broke on Election Day. Many jammed when voters fed ballots into scanners, which can result in erroneous vote counts if ballots are inserted multiple times. Poll workers are supposed to adjust counters to reflect a single vote but in many cases failed to do so, causing the discrepancies, Baxter said.

Even so, Baxter said it’s unlikely all 392 of the city’s precincts with mismatched numbers will be disqualified from a recount. The city is in contact with elections officials at the state of Michigan and Baxter predicted the numbers will match when the ballot boxes are re-opened for the recount, which starts Tuesday in Wayne County at Cobo Center.

“It’s a challenge, but we’re confident the ballots will match,” Baxter said. “I don’t think it’s going to be 100 percent, but it never is with a recount.”

County reports obtained by The Detroit News, though, indicate canvassers were provided no explanation for why the numbers didn’t add up in those precincts. They certified the results of the election anyway.

In Detroit, 158 of the 392 precincts with ballot discrepancies had just one extra ballot accounted for either in the poll book or in the ballot box, according to the Wayne County’s canvassing report.

For suburban Wayne County, 72 percent of the 218 precincts boxes with discrepancies in the number of ballots were off by one ballot.

The other ballot discrepancies in Detroit and Wayne County precincts ranged between two and five ballots, according to the report.

The recount will begin throughout the rest of Michigan’s 83 counties in phases this week.

Republican President-elect Donald Trump won Michigan by a razor-thin margin, 10,704 votes. Presumably, Clinton’s best opportunity to eliminate that margin rested in finding uncounted ballots in Wayne County, which she carried by a 2-1 ratio.

Disqualifying huge numbers of precincts would make it “almost impossible” for the former New York senator to make up the votes, said Ernest Johnson, a Democratic political activist who worked to get out the vote for Clinton.

“It’s a real long-shot now because, if I were looking for 10,000 votes, the first place I’d look is Wayne County,” Johnson said. “That’s a huge problem. ... But if anything good comes of this it brings up this problem (with voting machines) that needs to be corrected.”

None had nearly as many problems as Wayne. But at least 13 of 222 precincts in Genesee County are not balanced. More than half of those were in heavily Democratic Flint, according to county canvassing reports. The election was still certified by its board of canvassers.

“The trouble is there’s too much leniency with the board of canvassers,” said John Gleason, Genesee County’s clerk. “They’re not as stringent as need to be because they think it won’t affect the outcome of the election.”

Gleason, who estimated the recount will cost the cash-strapped county $100,000, said he expects the numbers to reconcile when workers begin the county recount on Wednesday.

“It’s impossible to tell at this point how many will and how many won’t be re-countable,” added Joseph Rozell, elections director for Oakland County.

In the first six hours of Ingham County’s recount Monday, six of 30 precincts from Lansing could not be recounted. One of the ballot containers had a hole in it, making it susceptible to tampering and not recountable, county Clerk Barb Byrum said.

Elections officials in Washtenaw and Marquette counties told The News on Monday that votes in all precincts were reconciled.

Krista Haroutunian, chair of the Wayne County Board of Canvassers, said recount workers will have to sort out the issue when they encounter these ballot boxes where the numbers don’t reconcile with the election records.

“When a recount is started, these numbers could change based on information discovered during the course of the recount, according to our procedures,” Haroutunian said. “You don’t know until you get in the middle of it.”

State law spells out a prescribed criteria for determining whether a precinct can be recounted. Workers first check to make sure the number of ballots on the seal of the container matches the ballots recorded by workers on Election Day.

“If the seal number matches, then we know it’s not been tampered with,” Rozell said.

If numbers don’t match, then workers can count all of the ballots in the precinct twice to see if there was an error made by workers on Election Night.

“If it does not match after the second count, then it’s not recountable,” Rozell said.

Entire precincts can be set aside in a recount if the ballots are stored in an unapproved container or if it isn’t properly sealed.

At Ingham County’s recount operation Monday at the county’s fairgrounds in Mason, ballots were stored in suitcase-like containers that were sealed with plastic zip-ties that had to be cut for workers to take out the ballots.

Byrum plans to have the ballot bags guarded each night during the recount by a sheriff’s deputy.

Elections officials instructed Ingham County recount workers who reconciled the ballot numbers on the second count to count them a third time to verify the numbers.

“The certified election results would stand if a precinct is determined to be non-recountable,” Byrum told reporters.