Thousands of Michiganians are trekking to the nation’s Capitol to witness or protest the swearing in of Donald J. Trump 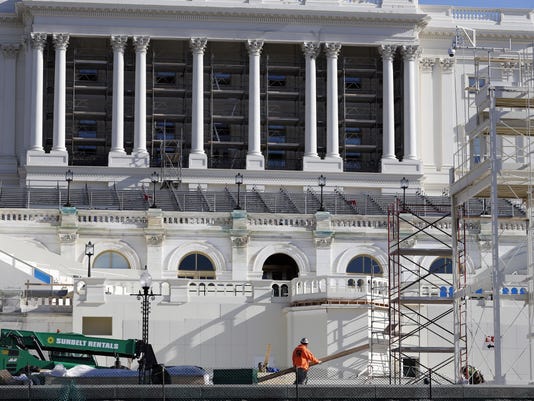 The West Front of the Capitol as work continues Wednesday on the stand for the inauguration of President-elect Donald Trump.(Photo: Alex Brandon / AP)

Washington — Thousands of Michiganians are trekking to the nation’s Capitol this week to witness or protest the swearing in of the 45thpresident, Donald J. Trump.

A more select few from Michigan are participating in the festivities. A Detroit pastor, Bishop Wayne T. Jackson, is delivering the benediction at the Friday inaugural ceremony. The Lansing Everett Marching Band is playing in a Thursday welcome concert on the steps of Lincoln Memorial, and two mounted drill teams were selected to march in Friday’s inaugural parade.

Christman Co., headquartered in Lansing, helped build the inaugural platform, which stretches more than 10,000 square feet on the west front of the U.S. Capitol.

On inauguration day, the platform will hold more than 1,600 people including the Republican president-elect and his family, former presidents, members of Congress, as well as governors, cabinet members and the diplomatic corps.

Among those watching Trump take the oath of office will be Aaron Ausmus, a Trump voter from Blissfield in Lenawee County, who is making the road trip with two buddies from work. He met the New York businessman at a rally last summer in Toledo, where the GOP candidate signed an absence note “excusing” his young sons from school.

“I had a Make America Great Again hat made before they went mass market,” Ausmus said.

Thirteen-year-old Hailey Dirschell of Coldwater wrote to Trump and her congressman, Republican Rep. Tim Walberg of Tipton, after learning about the inauguration in social studies class. Walberg’s office reached out and offered tickets to Hailey and her parents.

“I started crying because I was so happy that I could actually go,” Hailey said. “I was rooting for Trump to win the whole time.”

She and her parents, Erin and Sheila, plan to attend the Friday night black-tie gala hosted by the Michigan State Society and the congressional delegation at the Smithsonian’s National Museum of American History, featuring two Michigan bands. The family’s week has involved renting a tuxedo and finding gowns at a local consignment shop.

“Some balls are saying their ticket sales are down, but ours aren’t,” Rogers said.

As of Wednesday, ticket sales were slightly behind those for President Barack Obama’s inauguration in 2009, with two days to go.

“To be a part of a presidential inauguration is something special, regardless of party. A lot of people come for that,” Rogers said.

“A few folks said they were renting a bus and packing it full of Michiganders. I said, are you Trump supporters? They said, no we’re just coming because it’s the president’s inauguration.”

Performers at the gala will include the Simone Vitale Band of Royal Oak, and Mel Ball and Colours of West Bloomfield Hills. A group of police officers and detectives from Detroit and Flint called Peaceful Authority will sing the national anthem a cappella, Rogers said.

Two Trump cabinet nominees with Michigan ties are likely to make an appearance at the gala: Education pick Betsy DeVos from west Michigan and Detroit native Ben Carson, who is nominated to lead the U.S. Department of Housing and Urban Development.

Also on the guest list are at least four U.S. ambassadors and the incoming chair of the Republican National Committee, Ronna Romney McDaniel, the outgoing head of the Michigan GOP. McDaniel is expected to be officially elected as chair by committee members Thursday during the RNC’s winter meeting.

Schuette said the spotlight on DeVos and McDaniel are contributing to Michigan’s big footprint at this year’s inauguration.

“Why are there so many people from Michigan here? See our two leading ladies,” Schuette said in an interview.

While in Washington, Lena Epstein, who co-chaired Trump’s campaign in Michigan, has an itinerary full of business meetings and receptions, in addition to Friday’s inauguration ceremony. She is also taking husband Eric Medwed to one of the three official presidential inaugural balls at the Walter E. Washington Convention Center, where Trump is expected to make an appearance.

“I will be cheering so loudly. I will be praying for him. I will be behind President Trump 100 percent,” Epstein said.

Other Michigan events include an open house hosted by the congressional delegation at Longworth House Office Building and receptions to honor DeVos and McDaniel, hosted by Snyder.

Snyder is expected to attend the inauguration, the inaugural parade and the Michigan Society’s gala, according to his office. Snyder never endorsed Trump during the campaign and said last month that the president-elect hasn’t returned his calls.

“I’m sure that there are sore feelings. Fortunately, Lt. Gov. Brian Calley did find his way to ultimately support President-elect Trump. ... The governor did not. He was not on the bus, literally and figuratively,” Epstein said.

Calley revoked his Trump endorsement in October but ended up voting for the businessman via a straight-ticket ballot. Snyder declined to say whom he voted for on Election Day.

“I can’t blame President-elect Trump for not calling him back right away. If I was just elected president, I would be returning the calls of everyone who supported me, encouraged me and provided resources and more votes.”

Epstein said she believes Trump will come around because the president interacts with all governors, and Snyder is no exception.

Gillian Ream Gainsley of Ypsilanti is taking a bus overnight Friday to arrive in Washington in time for Saturday’s Women’s March, which has been organized in support of reproductive rights, equal pay and lesbian and gay rights. An estimated 7,000 protesters are expected from Michigan.

“I’m excited to be part of the march because I think it’s one of the first big acts of resistance,” Gainsley said.

“This is the first really big, really public act on the second day of his presidency to say: We cannot support what you’re doing. I’m very proud to be part of that.”

Most Michigan-related presidential inaugural events in Washington, D.C., are closed to the public or require the purchase of a ticket.

The Michigan congressional delegation is holding a public open house.

Voices of the People concert

Where: Steps of the Lincoln Memorial, Washington

Where: Along Pennsylvania Avenue from the U.S. Capitol to the White House

A black-tie inaugural party is being held to celebrate President-elect Donald Trump’s inauguration.