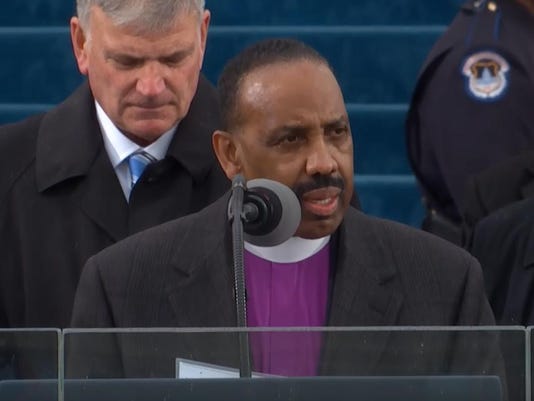 Washington — Bishop Wayne T. Jackson of Detroit gave the closing prayer of Friday’s inauguration at the U.S. Capitol, urging the nation to mend its divisions and unite.

“We were all created by you with one blood, all nations to dwell upon this land together,” said Jackson, pastor of Great Faith Ministries International church on Grand River.

Under a light drizzle, Jackson delivered the third and final benediction of the ceremony, asking God to bless the 45th president, Donald Trump, and Vice President Mike Pence.

He asked God to give them the “wisdom of Solomon, the vision of Joseph and the meekness of Christ: Solomon, who kept peace among many nations. Joseph, who dreamed better for the people. And Christ, who accepted us all.”

Jackson spoke to The Detroit News after he went back inside the Capitol to warm up and reunite with his wife, Beverly.

He said it was an honor to stand among the president and former presidents, members of Congress and high-profile members of the clergy such as the Rev. Franklin Graham, son of evangelist Billy Graham, and Cardinal Timothy Dolan of New York.

“It was just a humbling experience, and I was happy to be from Detroit and represent Detroit,” Jackson said. “To be up there with these people that close, sitting in that place – all the power of our country was up there today.”

Jackson said he spoke to Trump after the ceremony, and the president thanked him for a job well done.

The pair met in September when Jackson hosted Trump – then the GOP presidential nominee – at his church for a worship service and a private interview that later aired on Jackson’s African-American Christian cable channel, the Impact Network.

Jackson said he hopes to continue his relationship with Trump and believes the president will make it a priority to help struggling residents in inner cities such as Detroit. He noted that Trump specifically mentioned Detroit in his inaugural address.

“I think he clarified in people’s minds that he’s for the whole country – whether you’re black or white, whether you’re a child from Detroit or from some rich neighborhood, we all look up at the same sky,” Jackson said. “I really was very moved by that.”

In addition to Jackson, the inaugural program included prayers from Graham and Dolan, as well as the Rev. Paula White-Cain, Trump’s spiritual adviser; the Rev. Samuel Rodriguez of the National Hispanic Christian Leadership Conference; and the Rabbi Marvin Hier of the Simon Wiesenthal Center.

Former Rep. Pete Hoekstra, the Holland Republican who co-chaired Trump’s Michigan campaign, said he was struck by the prominence of religion and frequent acknowledgment of God in Friday’s program.

“Three opening prayers and three closing prayers, and also the words that the president used,” said Hoekstra, who was in the audience. “God is back in the public square.”

Jackson and his wife said they planned to attend the Michigan State Society’s inaugural gala Friday evening before returning to Detroit on Saturday in time for worship services.