A U.S judge temporarily blocked the Trump administration from enforcing an executive order on Muslim immigration. 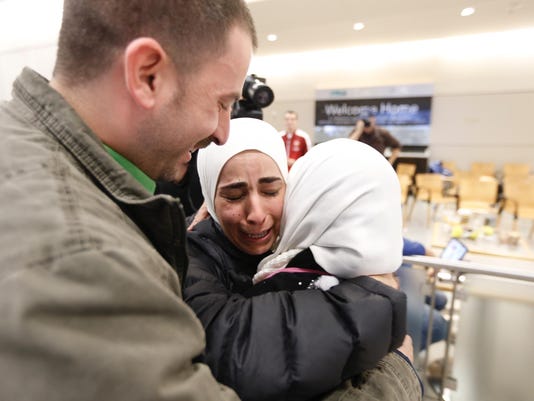 A U.S judge temporarily blocked the Trump administration from enforcing an executive order that would have led to the deportation of refugees and visa-holders from seven mostly Muslim countries.

The ruling by Royal Oak-born U.S. District Ann Donnelly in Brooklyn came at an emergency hearing Saturday night, hours after the American Civil Liberties Union and other groups sued to halt the Jan. 27 order. The order halts efforts to deport refugees and visa holders from Iran, Iraq, Libya, Somalia, Sudan, Syria and Yemen. Donnelly, who was born in Royal Oak, is a University of Michigan graduate.

The executive order, aimed at stopping would-be terrorists from entering the country, led to people being detained at airports from Dallas to Atlanta to New York, and sparked an outcry by foreign officials, Democrats in Congress, executives in Silicon Valley, and immigration lawyers, who said it violated the U.S. Constitution. Protests erupted at airports across the country.

The ACLU and other groups filed the suit on behalf of two refugees barred entry at New York’s John F. Kennedy Airport,including Hameed Khalid Darweesh, an interpreter who had worked for the U.S. military in Iraq. He was later allowed to enter the country. The groups also brought an emergency request “to prevent the imminent repatriation of dozens and dozens of refugees, visa-holders, and other individuals from nations subject to the January 27 executive order.”

To contact the reporters on this story: David Glovin in New York at dglovin@bloomberg.net, Bob Van Voris in federal court in Manhattan at rvanvoris@bloomberg.net.