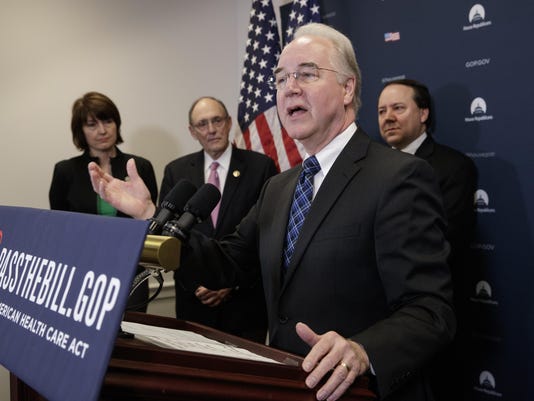 Washington —  President Donald Trump agreed to add fresh Medicaid curbs to the House Republican health care bill Friday, bolstering the measure with support from some conservative lawmakers but leaving its prospects wobbly. House leaders discussed other amendments calibrated to round up votes and scheduled a showdown vote Thursday.

“I just want to let the world know I am 100 percent in favor” of the measure, Trump said at the White House after meeting around a dozen House lawmakers and shaking hands on revisions. “We’re going to have a health care plan that’s going to be second to none.”

While the rapid-fire events seemed to build momentum for the pivotal GOP legislation, its fate remained clouded. One leading House conservative said the alterations were insufficient and claimed enough allies to sink the measure, and support among moderates remained uncertain.

Changes to the health overhaul law?

“My whip count indicates that there are 40 no’s,” enough to defeat the bill, said Rep. Mark Meadows, R-N.C., who leads the hard-line House Freedom Caucus. He said the change “doesn’t move the ball more than a couple yards on a very long playing field.”

Across the Capitol, Sen. Dean Heller, R-Nev., facing re-election next year, became the fourth Republican senator to announce his opposition. That left Senate GOP leaders at least two votes shy of what they’d need to prevail.

Thursday will mark the seventh anniversary of when Obama signed his health overhaul into law, one of his milestone domestic achievements enacted over unanimous GOP opposition. Beyond that symbolism, Republican leaders hope to allow time for Congress to complete the measure before an early April recess exposes lawmakers to two weeks of lobbying and town hall pressure tactics by activists, doctors, hospitals and other opponents.

The Republican bill would kill much of former President Barack Obama’s health care law, including tax penalties for people who don’t buy insurance and its expansion of Medicaid, the federal-state health program for the poor. It would create new tax credits that would be less generous than current federal subsidies for many consumers, and repeal levies on the wealthy and medical firms that helped finance Obama’s expansion of coverage to 20 million Americans.

Trump’s deal with lawmakers would let states impose work requirements on some of Medicaid’s roughly 60 million recipients. The condition would apply to healthy people with no dependents, a White House official said.

The agreement would let states accept lump-sum federal payments for Medicaid, instead of an amount that would grow with the number of beneficiaries. The program currently costs the federal government around $370 billion annually and covers costs no matter the amounts.

Also, any additional states that expand Medicaid would not receive the additional federal money Obama’s law provided them for doing so. Thirty-one states have enlarged their Medicaid rolls under the law.

It seemed clear that GOP leaders remained short of the 216 votes they’ll need, and additional changes were in the works.

Rep. Tom McClintock, R-Calif., said he’d been assured by House Speaker Paul Ryan, R-Wis., that the bill’s tax credit would be adjusted to focus more benefits on lower-income people. Rep. Robert Aderholt, R-Ala., among those who met with Trump, said the president “told his people” to work on changes making the measure more generous for lower-earning and older Americans.

“Everything has to be a change that would increase the vote count,” Scalise said.

Conservatives seemed unlikely to achieve their demands that the GOP bill’s phase-out of Obama’s Medicaid expansion — now 2020 — be accelerated to next year and that the credit be denied people with little or no tax liability. Centrists remained wary of yanking constituents from coverage. Many represent states where voters have gained Medicaid and other insurance under the 2010 statute.

In a report this week that prompted many GOP lawmakers to emerge as opponents, the nonpartisan Congressional Budget Office said the legislation would leave 24 million people uninsured in a decade, including 14 million next year, and boost out-of-pocket costs for many.

Republicans have a 52-48 Senate majority.

Nevada has expanded Medicaid and GOP Gov. Brian Sandoval has expressed opposition to the Republican legislation.