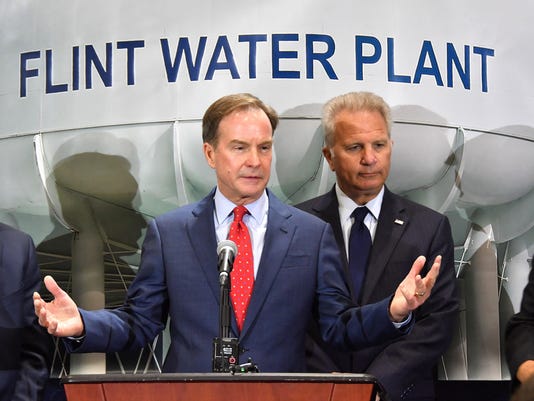 Michigan Attorney General Bill Schuette said Wednesday that Gov. Rick Snyder is not being charged with any crimes related to the Flint’s lead-contaminated water but left the door open to the possibility.(Photo: Dale G. Young / The Detroit News)Buy Photo

Michigan Attorney General Bill Schuette said Wednesday that Gov. Rick Snyder is not being charged with any crimes related to the Flint’s lead-contaminated water but left the door open to the possibility.

Schuette made the comment as he was charging Michigan Health and Human Services Director Nick Lyon and four other former Flint and state officials with involuntary manslaughter for failing to alert the public about an outbreak of Legionnaires’ disease in the Flint area.

There were 12 deaths and 79 other people sickened by Legionnaires’ disease in 2014-15, which some experts have linked to the contaminated water after the city switched to Flint River water in April 2014.

When asked at a Wednesday morning news conference why Snyder has not been charged, Schuette said no “crime has been established,” and “we’re not filing charges at this time.”

“I know a question I will get today is: Why aren’t you charging Gov. Snyder? I've met with people, angry, frustrated, demanding that I charge,” the attorney general said. “And I’ve heard from several who believe that I've been too harsh on the Snyder administration. Well, so be it.”

Among the Schuette critics is Flint native and filmmaker Michael Moore, who tweeted Wednesday that “Michigan Attorney General fails to arrest Michigan's governor for poisoning the people of Flint. Governor’s hack appointees were indicted.”

Schuette told reporters his team attempted to interview Snyder as part of the ongoing investigation but was “not successful.”

Snyder counsel Brian Lennon said the governor is willing to testify under oath and had scheduled a time and date for an interview. But Special Counsel Todd Flood failed to produce an investigative subpoena that had been promised, Lennon said in a statement.

“The Governor testified under oath before Congress and has always been willing to talk with the Office of Special Counsel under oath like every other witness so there is no appearance of special treatment,” Lennon said in a Wednesday statement.

Special prosecutor Flood failed to produce an investigative subpoena, meaning he had “no authority to take testimony under oath nor can he protect the confidentiality of his criminal investigation, something he has publicly said is important in previous hearings in open court in Genesee County,” he added.

Snyder’s office has at least $1.2 million in contracts with two private law firms to provide additional legal representation for the governor and his staff in the investigations and civil lawsuits related to Flint’s water contamination beyond the regular assistant attorneys general assigned to the governor’s office.

Schuette has had testy relations with Snyder’s office since he announced in January 2016 that he would conduct a Flint investigation.

Among the flashpoints was a June 2016 fight in which Schuette said Snyder’s private attorneys were withholding documents from his Flint water crisis investigators — an accusation the governor’s office quickly denied.

A Snyder spokesman said at the time the governor’s office turned over “hundreds of thousands of pages” of records to Flint special prosecutor Todd Flood on separate occasions in March, April, May and June.