Here’s a snapshot of their concerns from around the country 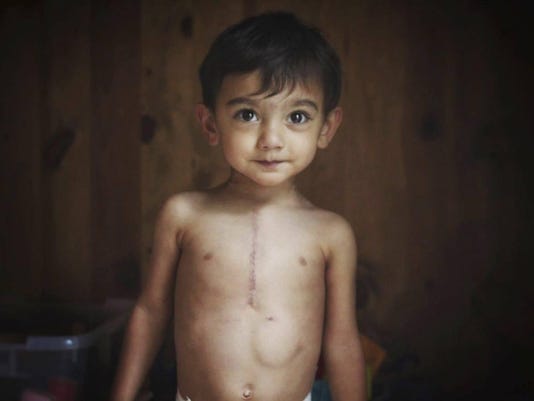 In this July 26, 2016, photo taken by Alison Chandra, Chandra's son, Ethan, 3, of Middlesex, N.J., poses for a photo in Middlesex. Ethan suffers from heterotaxy syndrome, a rare genetic disorder that causes organs to form incorrectly or in the wrong place. Their story drew attention in June 2017 when Chandra shared a photo of a hospital bill for Ethan's latest heart surgery. The charges added up to more than $230,000 but Chandra owed only $500 after insurance.(Photo: Alison Chandra / AP)

Denver — One American was able to afford her toddler’s latest heart operation. Another had the means to go back to college to pursue her dreams.

They and thousands of others were able to do so as beneficiaries of President Barack Obama’s Affordable Care Act. And while Republicans in Congress failed this week to craft a new health care plan, they did succeed in shaking the confidence of those who rely on the act the most. President Donald Trump’s “Let Obamacare fail” remark Tuesday did nothing to assuage their fears.

Here’s a snapshot of their concerns from around the country:

‘The wind knocked out of me’

It meant she could still afford medical bills for her 3-year-old son, Ethan, who suffers from heterotaxy syndrome — a rare genetic disorder that causes organs to form incorrectly or in the wrong place.

But Chandra’s anxiety swept back when she heard about the GOP effort to repeal the health plan with no replacement.

“That felt like getting the wind knocked out of me,” said Chandra, a resident of Middlesex, New Jersey.

Chandra’s story drew attention in June when she shared a photo of one of Ethan’s hospital bills on Twitter. It showed a list of charges topping $230,000 for her son’s latest heart operation at Boston Children’s Hospital. At the bottom, it listed what she owed after insurance payments: $500.

‘Saved my life and sanity’

Dawn Erin went to her first round of physical therapy Tuesday to treat painful bladder infections she’s suffered for two decades. Her copay was $20 and her health plan covers the rest.

Physical therapy might seem mundane for some, but the 46-year-old from Austin, Texas, was ecstatic. As a self-employed massage therapist with hepatitis C, her pre-existing condition made it impossible for her to afford insurance before the Affordable Care Act.

“This is care I have needed all my adult life, but insurance didn’t cover it and I couldn’t afford to pay out of pocket,” said Erin, a Democrat who voted for Hillary Clinton in November.

Erin relies on a government subsidy to help pay for her plan. She also was able to get expensive medication to cure her hepatitis C.

“I really wish some GOP senator would call me and explain to me how the (Affordable Care Act) is failing because this insurance reform has saved my life and sanity,” she said.

Alexandra Flores, 29, a library assistant at the University of South Florida in St. Petersburg, was astonished with Trump’s “Let Obamacare fail” declaration and his further insistence that “I’m not going to own it.”

“To say that he ‘won’t own it’ now when his party owns the House, Senate and White House is preposterous,” Flores said. “The president of the United States should not be treating health care this way.”

Flores is pursuing a master’s degree in library science. She credits the Affordable Care Act for her decision to go back to school rather than be locked into her previous office job. She pays $77 a month for her health plan. The government kicks in about $100.

“Trump is acting like those who currently benefit from the ACA are wrong and will be punished for the simple act of having health insurance,” Flores said, adding that she feels he’s using her health care coverage “as a bargaining chip.”

“I’m not sure there is a way to plan” for the future, she said. “It’s like we’re playing a really horrifying lottery.”

‘Giving up my Nashville dreams’

Nashville-based Rachel Potter is thinking about giving up her dream as a professional singer and moving to Florida to take a corporate job or someplace else with insurance. She’s toured the country in the Broadway musical “Wicked” and with her own country music band.

Being self-employed, she said Tuesday, is “too uncertain” when it comes to the future of American health care.

Potter was covered under the Affordable Care Act when she unexpectedly became pregnant last year and had bleeding and other complications. Her medical bills were more than $40,000, but she paid about $2,000.

“Now that I have a child I’m considering seriously moving back to Florida and giving up my Nashville dreams to work for a corporation,” said Potter. “That way I can at least be certain my child and I will have coverage.”

Jake Martinez, 32, of the Salt Lake City suburb of Murray, Utah, is a social work student who also works two part-time jobs. He takes medication for his epilepsy that can cost hundreds of dollars a month. The Affordable Care Act, he said, made it possible to get affordable coverage for himself, his wife and their three children. Without it, he may decide to drop out of college so he can afford insurance.

“If I can’t treat my epilepsy, I can’t drive, I can’t go to work. Things that are day-to-day activities become health hazards,” Martinez said.

He and his wife, who owns a home day care business, have been trying to create a bare-bones budget they could live under if they can no longer buy health care on exchanges with help from subsidies. It’s not easy, he said.

“We live now a life of a lot more day-to-day stress,” Martinez said.