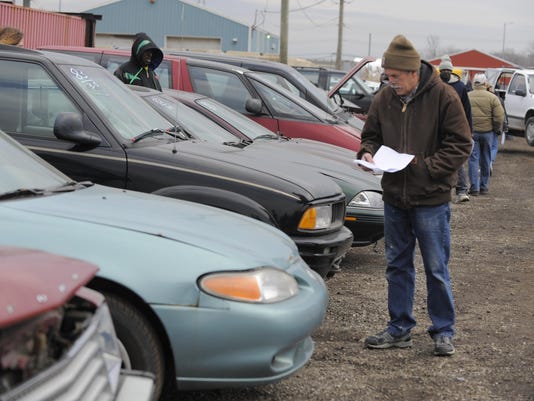 Michigan police agencies reported confiscating $15,288,514 in cash last year that was eventually forfeited by owners, along with 2,037 vehicles, 806 weapons, 276 financial securities and 15,160 other personal property items of some value.(Photo: Steve Perez / The Detroit News)Buy Photo

Lansing — Michigan law enforcement agencies confiscated more than $15 million in forfeited cash as well as property from individuals linked to suspected crimes in 2016, but a new report shows charges were never filed in nearly 10 percent of the cases.

State, county and local agencies documented 5,290 civil asset forfeitures last year under a new and enhanced reporting law that took effect Feb. 1. No one was charged with a crime in 523 of those forfeitures despite civil court authorization based on an alleged violation. At least another 196 people were charged but not convicted.

The Michigan Department of State Police report says “many” people accused of crimes cooperated with authorities, who then decided not to pursue charges. But that data was not tracked in the new report, which has given new fuel to critics who want to tear up the state’s civil asset forfeiture law.

“If I live in a world where 10 percent is acceptable for something that people didn’t do wrong, we’re living in the wrong world,” said Rep. Pete Lucido, R-Shelby Township. “Change the world now.”

Lucido helped reform Michigan civil asset forfeiture laws last term, and this February introduced legislation that would require a criminal conviction to initiate forfeiture proceedings. Under current law, a civil court can authorize forfeiture if there is “clear and convincing evidence” it was related to a crime even if an individual is never charged.

Civil asset forfeiture was thrust into the national spotlight this week when Attorney General Jeff Sessions reversed an Obama-era rule to discourage the practice. Sessions said state and local police can pursue forfeiture based on suspected violations of federal law, giving agencies another avenue to pursue forfeiture even if state laws are more restrictive.

“Jeff Sessions is wrong,” said Lucido, a supporter of Republican President Donald Trump, who appointed the attorney general. He criticized Sessions for the policy reversal during a Friday taping of “Off The Record” on WKAR-TV.

“From the moment the Legislature made its mistake here years ago and said we are allowed to take property without having due process of the law, the right and the opportunity to be heard, that gave everybody free rein at police agencies to go in and take things they’re not authorized to do,” said Lucido, who is also an attorney.

The new federal policy could make it easier for state or local agencies to pursue civil asset forfeiture in Michigan, said Jarrett Skorup of the Mackinac Center for Public Policy. In cases involving federal laws, those agencies could seize property “just based on probable cause rather than what our state standards require, which is clear and convincing evidence.”

Kimberly Buddin with the American Civil Liberties Union of Michigan said it’s not clear how the “probable cause” standard would be applied. Buddin said she does not think the federal policy will have a large impact in Michigan because the state still has relatively lax forfeiture laws.

“States that have stricter policies in place are going to see the biggest impact from this new order, but in Michigan, unfortunately, we still have a long ways to go,” she said. “It’s not going to impact us as much as it will some of those other places.”

Michigan police agencies reported confiscating $15,288,514 in cash last year that was eventually forfeited by owners, along with 2,037 vehicles, 806 weapons, 276 financial securities and 15,160 other personal property items of some value.

More than $12 million in cash and assets “amassed by drug dealers was forfeited” in 2016, Michigan State Police Director Kriste Etue said in a letter delivered to state House and Senate officials along with the new report. Law enforcement officials have been open to some civil asset forfeiture reforms but have otherwise defended the practice as an important tool to break up profitable criminal enterprises.

Forfeiture funds were used to “enhance law enforcement by providing resources for equipment, personnel, vehicles, training and supplies,” Etue said. The seizures also “allowed some agencies to contribute monies to nonprofits that assist in obtaining information from citizens and solving crimes.”

That’s likely down from 2015, when net proceeds totaled approximately $20.5 million, according to state police. The 2016 report includes only 11 months of data because of the implementation date of the new reporting requirements.

A majority of the 2016 forfeitures — 4,955 — were processed under the state public health code, which includes laws governing controlled substances. Another 139 were related to suspected violations of public nuisance laws, including prostitution or illegal gambling.

Forfeitures were most commonly tied to possession of less than 25 grams of cocaine, heroin or other narcotics, with agencies reporting 897 instances. Another 824 forfeitures were related to individuals suspected of delivering or manufacturing marijuana.

A continuing push to reform Michigan’s civil asset forfeiture law has brought together legislators and groups from different sides of the political spectrum, including the free-market Mackinac Center and more left-leaning ACLU of Michigan.

The reform coalition supports Lucido’s bill to require a criminal conviction but wants to see a larger package that also would limit what police agencies can do with cash or property they confiscate, Skorup said.

“All the money goes back to law enforcement, and that creates an incentive,” he said.

Collectively, 30 percent of all asset forfeiture money used by state and local police agencies last year was spent on equipment, according to the report. Another 10 percent was spent on personnel, followed by seven percent each on supplies and materials, vehicles and training.