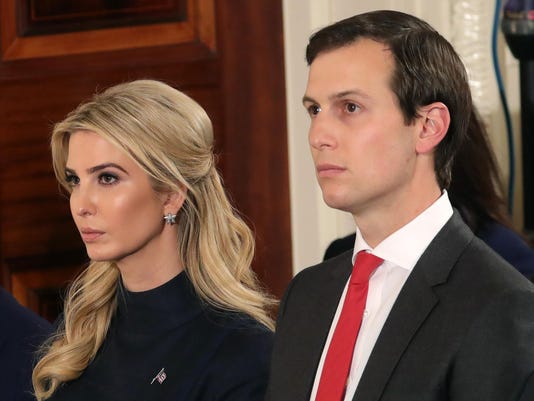 The previously unreported assets were included in updated disclosure reports certified by the U.S. Office of Government Ethics on Thursday as part of the “ordinary review process,” according to Kushner’s filing .

Among the new set of assets Kushner disclosed, which could be worth as much as $51 million, he reported owning an art collection worth between $5 million and $25 million. The new forms also reflect that Kushner sold his interest in an aging shopping mall along the Jersey Shore, and no longer has a stake in a company that had held an interest in apartments in Toledo, Ohio.

Kushner also clarified his $5 million to $25 million stake in a holding company that owns Cadre, a real estate tech startup he co-founded with his brother, Joshua, that investors valued at $800 million.

Kushner’s wife and the president’s daughter, Ivanka Trump, also filed new federal disclosures . She reported assets of at least $66 million and earned at least $13.5 million in income last year from her various business ventures, including more than $2.4 million from the new Trump hotel near the White House.

The filings reflect the extraordinary wealth of Trump and her husband, who jointly made at least $100 million since the beginning of 2016 and hold at least $206 million in combined assets, including some that they report are being sold off. The couple stepped down from running their companies and left behind their lavish Manhattan apartment to move their three small children to Washington earlier this year.

The new disclosures come as Kushner faces renewed questions about his vast business holdings and how they may conflict with his role shaping public policy.

A lawyer advising Kushner said that federal officials are allowed to amend their initial financial disclosures before they are certified, and stressed that Kushner had complex finances.

“Jared and Ivanka have followed each of the required steps in their transition from private citizens to federal officials. The Office of Government Ethics has certified Jared’s financial disclosure, reflecting its determination that his approach complies with federal ethics laws,” said Kushner attorney Jamie Gorelick. “Ivanka’s financial disclosure form is still in the pre-certification stage, as she began the process later.”

Clay Johnson, who served as President George W. Bush’s director of presidential personnel, said he was surprised by the sheer number of updates six months in.

“The way we ran it … is that the general direction to all nominees is tell us what we ask for now. We will then stand behind you whatever may come in. But there are to be no surprises,” said Johnson, who also served as Bush’s deputy director of the Office of Management and Budget.

The federal disclosures filed by Ivanka Trump were her first since taking on an official, unpaid role at the White House.

The bulk of her assets came from the $50 million value she placed on her business trust, formed to hold a collection of her businesses and corporations. The trust produced between $1 million and $5 million in income.

Trump got $2.5 million in salary and severance when she resigned from the Trump Organization in January. She received $787,500 as an advance for her book, “Women Who Work.”

In addition, Trump also revealed that she will be receiving recurring annual payments totaling $1.5 million from some of her real estate and consulting interests, according to agreements she worked out in consultation with the Office of Government Ethics. Her filing notes that the fixed payments were necessary to reduce her interest in the performance of the businesses.

The documents also show that the young couple resigned from a wide array of corporate positions: Kushner stepped down from 266 such posts, while Trump resigned from 292 positions. The form requires officials to use ranges to report their income, which makes it difficult to determine the couple’s exact wealth.

A White House spokesman said Kushner sold his interest in the Monmouth Mall in Eatontown, New Jersey, in May. His family company recently received approval from town officials to greatly expand the mall in the face of opposition, and now is embroiled in a related lawsuit filed by four residents. Kushner reported receiving at least $2.1 million in income from the property.

He also no longer owns a company holding an interest in several apartment complexes in Toledo, Ohio. Those complexes are part of the Kushner Cos.’ garden apartment business that includes more than 20,000 units in six states. The Toledo apartments are no longer listed on the Kushner Cos. website, suggesting that the company may have sold them off.

Representatives of the Kushner Cos. did not immediately respond for comment.