GOP discord might not bode well for raising debt ceiling

GOP discord might not bode well for raising debt ceiling 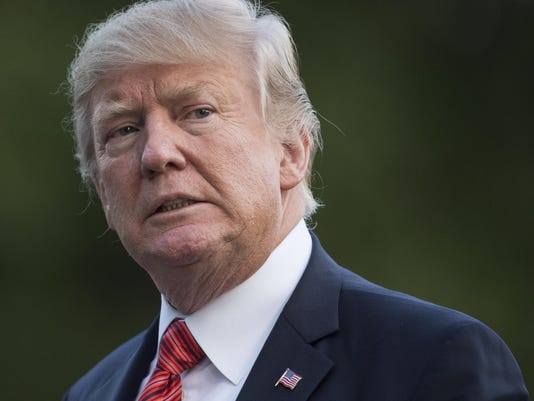 Washington — Fanning the flames of GOP discord, President Donald Trump is accusing Republican congressional leaders of botching efforts to avoid an unprecedented default on the national debt. “Could have been so easy-now a mess!” Trump tweeted.

The president’s sharp words underscored the perilous state of play as Congress heads into the fall without a clear plan to take care of its most important piece of business: If it does not increase the nation’s $19.9 trillion borrowing limit, the government could be unable to pay its bills, jarring financial markets and leading to other harsh consequences.

Trump unleashed his latest criticism of the GOP’s congressional leadership in a series of morning tweets Thursday that also included a rebuke of Majority Leader Mitch McConnell for his inability to get the Senate to repeal the Obama health care law. The harsh posts were fresh evidence of the president’s fraying relations with fellow Republicans just when the White House and Capitol Hill most need to be working in sync.

Critiquing GOP legislative strategy, Trump tweeted that he had asked McConnell and House Speaker Paul Ryan to attach the legislation increasing the borrowing limit — a toxic vote for many Republicans — to popular military veterans’ legislation that he recently signed. The idea was floated in July but never gained steam in Congress.

Trump said that because legislators didn’t follow that strategy, “now we have a big deal with Dems holding them up (as usual) on Debt Ceiling approval.”

Republicans control both Congress and the White House, placing the burden on them to ensure the government doesn’t default. In the past, Democrats largely provided the votes for debt limit increases.

The Treasury Department has said the debt ceiling needs to be raised by Sept. 29 to avoid potential default on government obligations including Social Security and interest payments.

House Speaker Paul Ryan, playing down Trump’s notion of a debt limit “mess,” said flatly that Congress would “pass legislation to make sure that we pay our debts.”

McConnell likewise said earlier in the week that there was “zero chance, no chance, we won’t raise the debt ceiling.”

The president’s latest broadsides against members of his own party came one day after the White House and McConnell issued statements pledging to work together.

Ryan, speaking to Boeing employees in suburban Seattle, said he and Trump have “different speaking styles” but are in “constant contact” on the policy agenda.

“For me it’s really important the president succeeds, because if he succeeds then the country succeeds,” Ryan said.

For all of that conciliatory talk, the evidence of mounting friction between the president and the Republican Party is growing.

Trump fired back Friday at Tennessee Sen. Bob Corker after the Republican lawmaker questioned the president’s “competence” and “stability” last week. Trump tweeted: “Strange statement by Bob Corker considering that he is constantly asking me whether or not he should run again in ‘18. Tennessee not happy!”

Corker has not yet said whether he’ll seek re-election in 2018.

Arizona Sen. Jeff Flake said in an interview with Georgia Public Broadcasting on Wednesday that the president was “inviting” a 2020 presidential primary challenge because he was only cultivating the GOP base of voters. Trump has labeled Flake as “weak” and “toxic” on Twitter.

Maine Sen. Susan Collins, a Republican who has been critical of the president, told MSNBC this week it was “too difficult to say” if Trump would be the party’s presidential nominee in 2020.

The growing rift between congressional Republicans and Trump could make it more difficult for the White House to advance its agenda.

The White House and congressional Republicans have yet to engage in serious negotiations to address the debt ceiling or stopgap legislation needed to avert a government shutdown when the fiscal year ends on Sept. 30. Trump is expected to hold meetings with congressional leaders after the Labor Day holiday.

She added that the White House was looking for a “clean” debt ceiling bill — without any legislative add-ons. But tea party Republicans and outside conservative groups are demanding spending cuts as the price for increasing the borrowing limit.

Raising the debt ceiling has often confounded Congress. A 2011 standoff between Republicans and the Obama administration over raising borrowing authority led to tighter controls on spending. That standoff was not resolved until the eleventh hour and prompted Standard & Poor’s to impose the first-ever downgrade to the country’s credit rating.

Sen. Lindsey Graham, R-S.C., said raising the debt ceiling and securing the U.S. border was a “good combination” and suggested Republicans force Democrats into difficult votes over the borrowing limit.

Beyond the challenge of the debt limit, the effort to avoid a government shutdown could be complicated by Trump’s long-promised plan to build a wall along the U.S.-Mexico border. The president threatened Tuesday to force a federal shutdown unless Congress provides money for the project. Sanders told reporters the administration would “continue to push forward and make sure the wall gets built.”

Appearing at a Louisville breakfast event, McConnell tried to brush aside the tensions with Trump, quipping that running the Senate was “a little bit like being the groundskeeper at a cemetery. Everybody’s under you, but nobody’s listening.”