Gov candidates quick to tout, decry ties to the president 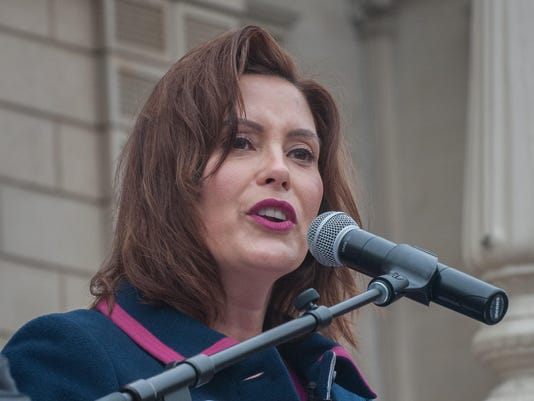 “President Trump noticed our momentum,” Schuette boasted in a Sunday email to supporters suggesting campaign donations of between $10 and $500.

“We have a huge opportunity to get our message in front of voters before the liberal media and out-of-state donors start their typical smear attack,” said the Republican attorney general.

Democratic gubernatorial candidate Gretchen Whitmer was even faster to raise money off the president’s tweet. Her campaign sent out a pitch Saturday night little more than an hour after Trump endorsed “our biggest opponent.”

“This was such a rushed job the President misspelled Schuette’s name,” said the fundraising email, poking fun at Trump’s initial reference to “Shuette.”

“It's clear that Republicans are starting to get worried about Gretchen and they know how important this race is to the future of our state and our country.”

Schuitmaker, a 49-year-old Lawton Republican, has served in the Michigan Legislature since 2005. A private practice attorney before working in politics, she is the president pro tempore in the Senate and chairs the appropriations subcommittee on higher education.

“As a pro-life, pro-Second Amendment, law-and-order conservative who achieves results on life touching issues, I am running for attorney general to protect what is important,” she said in a letter to supporters announcing her run.

The attorney general’s responsibilities are “wide and ranging,” she said, including “pushing back against federal government overreach, holding criminals accountable and helping victims, tackling challenges such as drug addiction, punishing voter fraud and defending our values and the Constitution.”

Leonard has not formally declared for the race but recently told The Detroit News he is discussing the possibility with his family as supporters encourage him to run. The 36-year-old DeWitt Republican worked as an assistant attorney general and in the Genesee County Prosecutor’s Office before winning election to the House in 2012.

Eastern Michigan University regent Mary Treder Lang on Tuesday launched her campaign for the Republican nomination for secretary of state.

The 57-year-old Grosse Pointe Farms resident is a certified public accountant whose campaign says she has led teams focused on computer security, finance, sales and government relations. She said she is running on a platform of election security, optimization and stability.

“I believe that I have the professional background, both in the private and public sector and executive level, to provide the skills necessary in order to move the Secretary of State’s Office forward,” Treder Lang said.

Sen. Gary Peters, D-Bloomfield Township, introduced a bill this week that would prohibit travel expenses for federal employees of the executive branch at properties owned by Trump, his cabinet or their family members.

The Heightened Oversight of Travel, Eating and Lodging or HOTEL Act would bar federal agencies from approving employee travel expenditures at businesses in which top government officials have a financial interest.

“Executive branch officials like the president and cabinet secretaries should not have a profit motive in the travel decisions made by the federal employees under their supervision,” said Peters, the ranking Democrat on the Senate Subcommittee on Federal Spending Oversight & Emergency Management.

In announcing the bill, Peters noted a Washington Post report last week that the government paid more than $1,000 for an executive branch employee’s two-night March stay at the Trump-owned Mar-a-Lago resort in Palm Beach, Florida, while traveling on official business.

The legislation is co-sponsored by Democratic Sens. Elizabeth Warren of Massachusetts and Tom Udall of New Mexico.