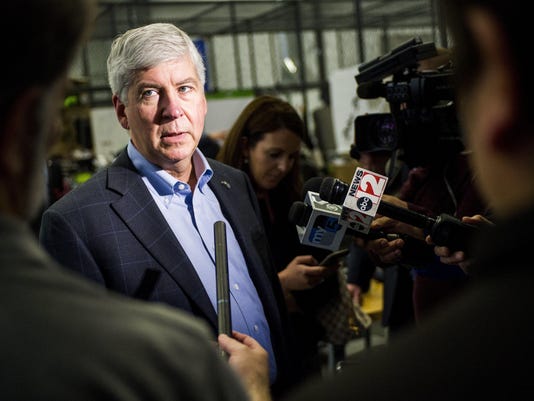 Lansing — Gov. Rick Snyder on Wednesday signed a new law that will require local governments across Michigan to pre-fund retiree health care benefits for new hires and provide detailed reports of unfunded liabilities to the state.

The Republican governor had backed a more aggressive plan to address a combined $18 billion in looming long-term debts for cities, townships and counties, but the GOP-led Legislature scaled back its own bills this month amid fierce opposition from police and firefighter unions that feared forced benefit cuts.

The revised legislation will require local governments to report employee pension and retiree liabilities to the state. Municipalities with large debts could be required to submit a corrective action plan to a new Municipal Stability Board within the Department of Treasury.

The new law largely mirrors recommendations made by a task force the governor had appointed that included local government and union officials who acknowledged a lack of consensus on some issues.

The framework they developed will “help move more communities towards greater financial stability,” Snyder said in a statement. “I also look forward to a continued cooperative effort as future work occurs on this important issue.”

Under the new law, local government plans that have not funded 40 percent of future health care obligations and 60 percent of pension liabilities will be subject to extra scrutiny by the state. Those that don’t receive a state waiver could be monitored by the new three-member stability board appointed by the governor.

Beginning in July, local governments will have to pre-fund “normal costs” for retiree health care benefits offered to new employees.

Provisions struck from the original proposal before approval by the House and Senate would have allowed the state to send three-member financial management teams into local communities and give them broad powers to address unfunded retirement obligations.

Democrats and local government employee unions argued the initial legislation granted too much authority to the state in addressing long-term debts in a fashion similar to controversial emergency managers. The teams would have been empowered to modify benefits, change budgets and sell city assets to cover pension or retiree health care costs.