Democrats negotiating with FBI on memo

Democratic Rep. Adam Schiff said he is concerned the White House would try to block its release – even after redactions

Democrats negotiating with FBI on memo 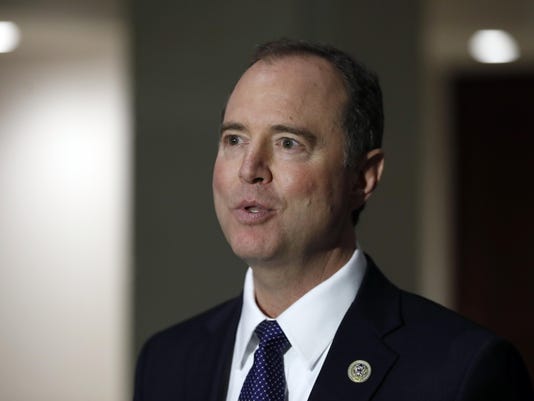 Washington – The top Democrat on the House Intelligence Committee said Wednesday that he is continuing to negotiate with the FBI over the release of a memo packed with classified information from secret surveillance applications, but remains unsure if the White House will attempt to block its release.

Democrats argue their memo, with as yet undisclosed details used to win court approval to listen in on a former adviser to the campaign of President Donald Trump, would rebut a Republican memo released two weeks ago. Trump has said the GOP memo proves his campaign was the target of a politically motivated spying operation.

“What I don’t know is what authority the FBI and DOJ has been given. When we reach an agreement with the FBI, is that the end of the matter, or will the White House use a veto?” Rep. Adam Schiff said at The Christian Science Monitor Breakfast.

Schiff and Democratic staff have been talking with the FBI about what portions of their memo to redact, after the White House last week announced that it would not approve its release without significant redactions. Democrats have argued the memo would prove that the Foreign Intelligence Surveillance Act warrant approved for Carter Page used credible evidence, and not just allegations contained in the “Steele Dossier” which was bankrolled in part by a lawyer working for the presidential campaign of Hillary Clinton and the Democratic National Committee. Schiff noted Wednesday that the memo includes classified details from four FISA applications on Page – the original request filed in October 2016, and three subsequent renewals.

A broad swath of Republicans also have said releasing the Democratic memo would be good for the president, practically and politically – they say it will not detract from allegations that the Obama-era Justice Department spied on Trump’s campaign to help Hillary Clinton.

“He was right to release the (Nunes) memo, and I think it’s been vindicated by Sen. Grassley and a few others. And he should release the Democratic memo,” said Newt Gingrich, an informal Trump adviser outside the White House in an interview.

The fight over the second memo comes as the House Intelligence Committee’s probe has struggled getting clear answers from the White House on a range of issues. Former White House chief strategist Steve Bannon is scheduled to appear again before the committee Thursday, following weeks of delays and uncertainty, according to two people familiar with the committee. They spoke on condition of anonymity to discuss the committee’s private schedule.