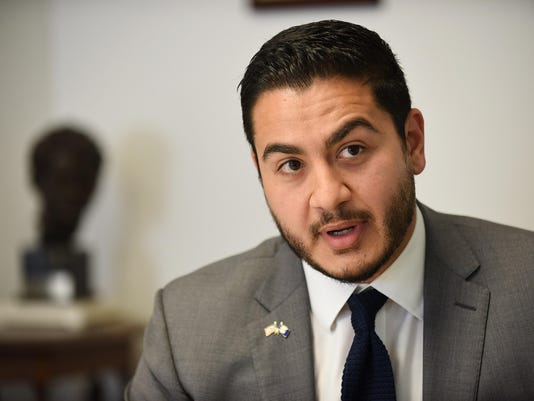 Democrat Abdul El-Sayed is asking a judge to declare him an eligible candidate for governor after questions surfaced over whether his voter registration history in Michigan and New York could be grounds for a constitutional challenge.(Photo: Robin Buckson / The Detroit News, file)Buy Photo

Lansing — Democrat Abdul El-Sayed is asking a judge to declare him an eligible candidate for governor after questions surfaced over whether his voter registration history in Michigan and New York could be grounds for a constitutional challenge.

Attorneys for the former Detroit health department director filed a request for declaratory judgment Monday in Wayne County Circuit Court. The 33-year-old is hoping for a quick resolution as he competes in the Democratic primary.

“We know we’re 100 percent eligible, and we’re not afraid to prove it in the court of law,” El-Sayed told The Detroit News.

“The folks who levied these attacks about my eligibility really wanted this to play out in the court of public opinion, with the goal of putting a question mark next to my name. Our goal today is to take that question mark and turn it into a period.”

The Michigan Democratic Party early last month asked El-Sayed to pre-emptively pursue an eligibility review after Bridge Magazine reported the gubernatorial hopeful was registered to vote in New York from October 2012 through at least March 2015.

Michigan’s Constitution requires any candidate for governor to be a registered elector in the state at least four years prior to the election. For the 2018 election, candidates must have been registered here by at least Nov. 6, 2014.

Secretary of State records show El-Sayed was “continuously registered to vote in Michigan since 2003,” but a spokesman said his registration had been placed on “cancellation countdown status” between 2013 and 2016 because he had had surrendered his driver’s license to get one in New York.

His attoneys say El-Sayed maintained continuous residence in Michigan while studying and working as a professor at Columbia University in New York. He and his wife purchased an Ann Arbor condominium in 2008 and kept personal property there, along with a storage space at his in-law’s home in Shelby Township, according to the filing.

El-Sayed rented apartments in New York from 2011 to 2015, his attorneys said, indicating he registered and voted in the 2012 presidential election in New York and paid income taxes in both states. He returned to Michigan full-time the fall of 2015 after landing a job in Detroit Mayor Mike Duggan’s administration.

“Dr. El-Sayed throughout maintained an intent to remain a Michigan resident, owning property and maintaining a residence in the state, remaining on the voter and tax rolls in the state, while he and his wife temporarily worked out of state,” wrote attorneys David W. Jones and Abigail L. Wrights from the Allen Brothers firm in Detroit.

In asking El-Sayed to pursue a court review last month, Michigan Democratic Party Chairman Brandon Dillon noted a Maryland candidate for governor had asked for similar eligibility determination rather than waiting for a potential Republican challenge. He welcomed on Monday Abdul’s request for a declaratory judgment.

“As we said before, making sure that this matter is settled sooner rather than later is the best option not only for Abdul’s campaign, but for Democrats as a whole,” Dillon said. “We’ve got the wind at our back and want to make sure that after the primary that there are no unnecessary issues standing in our way.”

El-Sayed submitted 24,000 petition signatures to the state earlier this month to qualify for the Aug. 7 primary ballot, becoming the first Democrat to do so. It gave the Michigan native “standing” to seek a court judgment on eligibility, he said.

El-Sayed suggested the eligibility issue is an “insider attack” from establishment figures worried he could challenge the status quo, but he did not directly name anyone he thinks may be behind the attack.

El-Sayed has been running an aggressive campaign but faced an uphill battle in his quest for the Democratic gubernatorial nomination.

“We’re a threat to the powers that be,” El-Sayed said. “They know they can’t beat me at the ballot box, so they’re trying to make sure I can’t get to the ballot box. But we know that in the court of law our facts stand 100 percent of the time.”