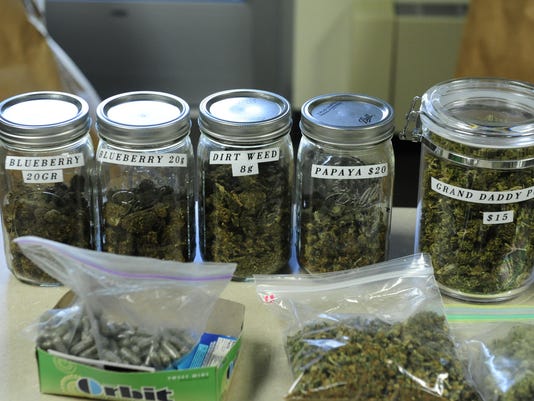 Michigan regulators are moving to shut down illegal pot shops across the state, officials said Thursday as a state licensing board denied or delayed action on the first business applications ever considered under a new commercial medical marijuana law.(Photo: Ricardo Thomas / The Detroit News, file)Buy Photo

Lansing – Michigan regulators are moving to shut down illegal pot shops across the state, officials said Thursday as a state licensing board denied or delayed action on the first business applications ever considered under a new commercial medical marijuana law.

The Medical Marihuana Licensing Board will reconsider pre-approval applications for two businesses at an April 19 meeting after initially denying them because of concerns over past criminal records by owners or employees.

With one member absent, the board deadlocked 2-2 on an application for a “secure transporter” license. A Detroit dispensary application failed in a 3-1 vote, and a motion to reject it was tabled for further discussion next month.

Meanwhile, Michigan State Police and the Department of Licensing and Regulatory Affairs have served more than 200 cease-and-desist letters this month to companies in Detroit and other parts of the state they say are operating outside of the 2016 law to regulate medical marijuana, first made legal by voters in 2008.

“We have not finished serving the notices yet,” said Andrew Brisbo, director of the Bureau of Medical Marihuana Regulation. “I feel pretty confident in our intelligence in pulling together the facilities that were operating without applying.”

While the bureau is not shutting down facilities itself, Brisbo said the state “makes referrals to law enforcement if we’re aware of unlicensed activity.”

Some facilitates have closed on their own as a result of the cease-and desist letters, he said.

The shutdown efforts come after the state gave existing medical marijuana businesses until Feb. 15 to apply for a legal license, provided they had approval from their local government. At least 72 local governments so far have opted into the law.

More than 400 companies or individuals have applied for medical marijuana business licenses, according to the state, including 215 existing businesses that submitted a form with local approval.

The pre-approval applications denied Thursday were the first ever considered by the state board, which is expected to consider dozens more in coming months. Three other applications were pulled from the agenda because board members wanted additional time to review new information from the bureau.

The meeting was marked by repeated debate over parliamentary rules and procedures.

Michael Densmore is one of just two Michigan residents who have applied for a secure marijuana transportation license – a critical function to deliver marijuana between growing or testing facilities and dispensaries – but the board deadlocked on his application because of an unspecified misdemeanor conviction from “about 20 years ago,” according to board member Don Bailey.

A misdemeanor that old should not preclude anyone from obtaining a license – the state law includes a five-year prohibition for applicants with certain misdemeanors – but Bailey said he was concerned Densmore did not disclose it in his initial application.

“This is not the way we want to start this, but … if someone is going to try to cloud and deceive from the very first step, that’s what is going to concern me,” Bailey said. “And the concern is for public safety going down the road.”

Board member David LaMontaine disagreed with Bailey and voted for the application.

“In this country, you commit an offense, you pay your penance, and you’re supposed to be good,” he said. “I’m not sure this is appropriate to hold against these folks.”

Densmore, who paid a $6,000 application fee to the state, was not allowed to address the board during its debate. State employees also told audience members they were not allowed to discuss specific applications during a public comment period.

After the hearing, Densmore said he hopes the board approves his application next month if all five members are present for the vote. He declined to discuss details of what he called a 21-year-old misdemeanor but suggested he was not aware it was on his record.

“I’m a law-abiding citizen,” Densmore told reporters, noting he has had a state concealed gun permit since 1999 and has qualified for several business licenses. “I had no idea there was anything out there like this. We’ll address it and take care of it.”

Medical marijuana business applicants formally denied by the state will be able to request a public investigative hearing, where they could present evidence on their eligibility for a license, according to bureau spokesman David Harns.

Despite the rocky start, Johnson said he has confidence the board will be able to review the growing backlog of applications at a faster rate in the future. The former state House speaker urged the bureau to provide members with background check and application information further ahead of future votes.

“I’m telling you, it’s not an easy process to go through and sort through these things,” Johnson said.

Bailey, a retired state police sergeant, said he expects the process will be refined.

“We can do this fast or we can do it right,” he said. “I want to be sure that all of us, in all aspects of it, are doing it right.”