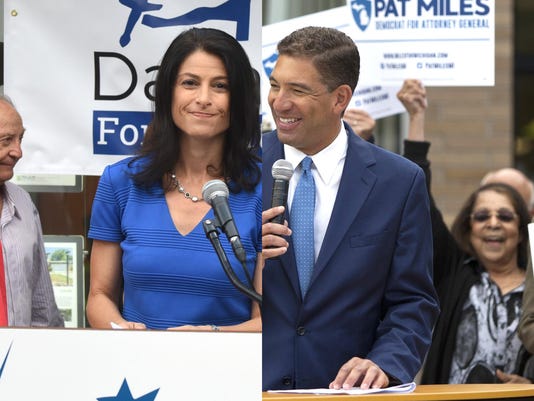 Lansing — Attorney general candidates Pat Miles and Dana Nessel are locked in a divisive race heading into an early endorsement convention designed to unify Democratic voters and donors around a nominee months ahead of the November election.

Michigan Democratic Party members, including an influx of new “progressives,” are set to flood Cobo Center in Detroit on April 15 for the endorsement convention, the first of its kind in several election cycles.

Officials expect thousands of Democrats will cast electronic ballots in support of candidates for attorney general, secretary of state and two Michigan Supreme Court justice slots prior to formal nominations in August.

“The goal is to signify who our nominee is likely to be,” said Chairman Brandon Dillon, “to basically clear the field so those (candidates) have extra time to raise money and campaign and be able to compete in November with what we know is going to be an onslaught of money from the Republicans.”

Miles, a Grand Rapids resident and former U.S. attorney for the Western District of Michigan, on Thursday picked up a major endorsement from the United Auto Workers union.

But liberals have attacked Miles for his past work as a corporate law attorney and his shifting positions on issues such as marijuana legalization and gay marriage — which he did not support when he ran for Congress in 2010 but now embraces.

But the Miles campaign has criticized her past work representing a strip club in Detroit and on Tuesday filed a campaign finance complaint against her alleging multiple violations of state law, a development Nessel’s spokeswoman called a “craven” stunt.

The attorney general’s race is emerging as a public proxy war between traditional liberal Democrats and grassroots “progressives” seeking to move the party farther to the left, said Lansing-based strategist and pollster Ed Sarpolus. The dynamics are new, but the intra-party tug of war is not.

“It’s not that this is happening any earlier, it’s just now visible,” Sarpolus said of the candidate selection process. “Typically, this has been done behind the scenes.”

Detroit attorney Bill Noakes, also seeking the attorney general endorsement, hasn’t raised any money for his campaign but said he has been focused on connecting directly with convention voters who will decide the race.

“This is an inside-the-party vote,” Noakes said. “I really only need to influence about 3,000 people, and the best way to influence those 3,000 people is to be with those people inside the Democratic Party.”

Some are predicting a much larger turnout, citing the energized “resistance” to Republican President Donald Trump and newfound involvement from supporters of Vermont U.S. Sen. Bernie Sanders, a self-described democratic socialist who won Michigan’s 2016 presidential primary.

More than 3,000 new members joined the state party this year prior to the cutoff date for convention eligibility, said spokesman Paul Kanan. He anticipates endorsement convention turnout could top numbers from February 2017, when roughly 5,000 activists — including more than 4,000 credentialed Democrats — convened in Detroit.

“We knew from the outset of this campaign that we would have a convention battle, and we’re prepared for it,” said Miles, who told The Detroit News his team has a “comprehensive plan” to win the endorsement.

Nessel — who encouraged supporters to join the party and is helping organize busing to the convention — said she personally has commitments from about 2,000 member Democrats who plan to attend and vote for her.

State party conventions are no longer “sleepy little affairs where maybe there were important determinations made in back rooms,” Nessel said.

“I think we’re going to see massive participation by either long-term Democrats who were never actively engaged with the party, or people who never even considered themselves to be Democrats but they do now, and they want to be heard.”

Miles, an African-American, could bring some diversity to the Democrat’s ticket, while a Nessel endorsement could set up the possibility of an all-female candidate contingent at the top of the ballot this fall.

Former state Senate Minority Leader Gretchen Whitmer is the early favorite in the gubernatorial primary. Jocelyn Benson, the party’s 2012 nominee for secretary of state, is heading into the convention unopposed and had raised almost $400,000 through January.

While competitors may still emerge prior to the convention, University of Michigan professor Samuel Bagenstos and appelate attorney Megan Cavanagh are the only declared candidates seeking the Democratic nomination for two seats on the Michigan Supreme Court. Justices Kurtis Wilder and Beth Clement are seeking election after appointment last year by GOP Gov. Rick Snyder.

Nessel, 48, has worked as an attorney for more than two decades, first as an assistant prosecutor in Wayne County and later as the head of her own firm. She has tried “hundreds and hundreds of cases” and represented indigent clients, she said, arguing her courtroom work has prepared her for the job as the state’s top law enforcement official.

A vocal advocate for marijuana legalization, Nessel contends support from the cannabis community could help her if she makes it to the November general election, which is also expected to include a statewide ballot proposal she said could drive more voter participation.

“Unlike another candidate in this race, I didn’t change my positions from one day to the next,” Nessel said. “I have a strong set of progressive opinions I’ve held for decades.”

Miles last month said he “decided to take a stronger stance on marijuana legalization” and now supports the proposal likely to make the Michigan ballot this fall. He had previously said only that he would enforce any law that voters approved.

Picking her to succeed Schuette would make a “real statement,” Nessel said. “I think it’s about time that this community, community that has been so deeply persecuted by the attorney general, at long last has somebody who will protect them and defend them.”

Miles campaign operatives have blasted Nessel for representing a Detroit strip club that was featured in a 2010 Detroit News article about an underage dancer and the arrest of two employees.

Responding to her on Twitter last month, T.J. Bucholz of Vanguard Public Affairs questioned whether Nessel is “a good candidate for the party” given her “record of defending cases like this in the current #metoo environment.” Republicans are “already exploiting it,” he said.

But characterizations of her work with the club are “flagrantly untrue,” Nessel said.

She told The News that Club Onyx hired her specifically to ensure there was no way minors could enter or dance there. Nessel collaborated with Detroit police to ensure an off-duty officer worked the perimeter of the building during peak hours, her campaign said.

Miles, 50, was appointed U.S. attorney by former Democratic President Barack Obama, a one-time classmate at Harvard Law School, after working as a private practice lawyer for Dickinson Wright. He resigned when Republican President Donald Trump took office but argues his experience running a federal office sets him apart from other attorney general candidates.

“I’m an experienced leader,” he said. “I’ve got a lot of integrity. I feel strongly about serving the people of Michigan, fighting for working families and fighting the Trump administration on its abuses and overreaches, and making sure that people are safe and that we protect the most vulnerable among us.”

Miles insists that his recent endorsement of the marijuana legalization initiative was not so much “a change of position” than “a change of publicity.” On gay marriage, Miles noted his 2010 opposition was consistent with many top Democrats at the time, including Obama, who publicly endorsed same-sex unions in 2012.

“My position has evolved on that, for sure,” he said. “I now support marriage equality and full LGBTQ rights. ... I will be a strong ally to the LGBTQ community.”

Miles’ office began prosecuting Nassar on federal child pornography charges in late 2016 and was the “first to put him behind bars,” he said.

When he ran for Congress in 2010, Miles garnered several GOP endorsements in his general election matchup against now-Rep. Justin Amash, a libertarian Republican who won the race to replace moderate GOP Rep. Vern Ehlers by 22 percentage points in a GOP-leaning district.

Miles said he ran as a “pro-choice, progressive Democrat” but won some crossover support because many longtime Ehlers voters viewed Amash as a “very extreme ideological conservative.”

“It’s a positive thing I can attract Republican voters,” he said, “and being from West Michigan, that’s a necessary thing.”

Who: People who have registered with the state party as Democrats

Voting process: Voting is electronic. Each candidate has a tablet/station where delegates will stand in line to cast their vote for each office