Officials: Inclement winter weather is preventing an underwater inspection of damaged lines in the Straits of Mackinac 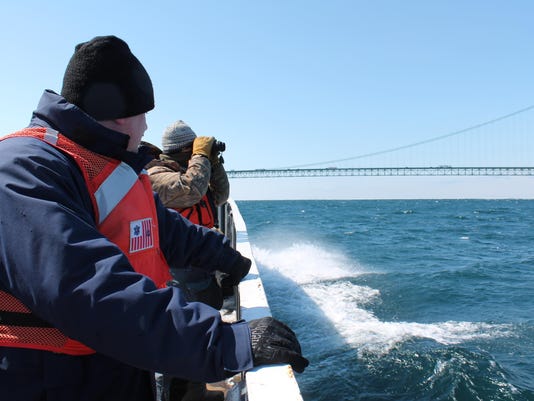 The Coast Guard investigates a mineral oil spill last week at the Straits of Mackinac. Enbridge said that three small dents exist in the Line 5 pipeline but pose no threat to causing a leak, the state said.(Photo: U.S. Coast Guard District 9)

A ship anchor dented Line 5 and caused a separate leak of 600 gallons of insulation fluid into the Straits of Mackinac, according to two sources with knowledge of the U.S. Coast Guard’s investigation.

The Coast Guard command has said “vessel activity ... may have caused” damage to power transmission lines as well as Line 5, but has emphasized its marine investigation isn’t finished and that the probe could take “months.”

The sources said Coast Guard officials know a ship’s anchor was lowered far enough to cause three dents in the twin pipelines, but American Transmission and Enbridge need to do an underwater investigation of the damage. Harsh winter weather is preventing that inspection of two damaged power cables and a closer look at three dents in the Line 5 oil and liquid natural gas pipeline as lawmakers express worries about keeping the energy lines running.

“They can’t deploy it this weekend because the water is too hazardous and it wouldn’t be safe for the responders,” Murphy said.

Line 5 owner Enbridge Energy also plans to deploy an underwater vehicle with a camera in the next few days, weather permitting, a company spokesman said Thursday.

The National Weather Service is forecasting a major winter storm to hit northern Michigan and the Upper Peninsula Friday through Sunday.

Weather will delay the underwater inspections for “a couple of days” because the vehicles and equipment can’t operate in the expected snow, high winds and high waves, said Lt. Gov. Brian Calley, who visited the Coast Guard’s command in the straits on Wednesday.

“It’s too important to trust anybody’s word,” Calley said about the Line 5 dents. “We have to verify for ourselves everything.”

The Michigan Department of Environmental Quality has said the leak from two cables belonging to the Wisconsin-based American Transmission Co. posed “no immediate public health threat.” The cables were shut down shortly after the leak was identified, and Murphy said officials have yet to observe an oil sheen or impact to surrounding wildlife.

The Coast Guard has asked other companies owning and operating lines beneath the straits to assess any damage to their infrastructure.

Enbridge informed state officials Tuesday that “three small dents” exist in the company’s pipeline but pose no threat to causing a leak. The developments prompted Gov. Rick Snyder to urge an imminent shutdown of Line 5 if studies find that it is physically and environmentally safe to building a tunnel below the straits to carry the pipeline and declare a ship likely caused the damage.

Vessels shouldn’t cause damage to the transmission lines or Line 5 because in 2012 Coast Guard maps identified areas in the straits as “no-anchor zones,” said Calley, who added the lines are 275 to 300 feet below the surface.

“This is not something that a ship operator wouldn’t know. And yet there was still a problem,” he said.

Navigation charts show where pipelines are in the straits, “and companies do not drop anchor in those areas,” said Glen Nekvasil, vice president of the Ohio-based Lake Carriers’ Association.

“It is premature to say the damage to the cable and pipeline was caused by a vessel going to anchor, Nekvasil added. “The U.S. Coast Guard has yet to conclude its investigation.”

But Calley said there is no other explanation for the damage. “There is not even another working theory out there other than an anchor strike,” he said.

At a Thursday hearing, Democratic U.S. Sen. Gary Peters of Bloomfield Township said it would be “irresponsible” to defer to the judgment of the federal pipeline agency and the state on reopening Line 5 before the Guard has performed any visual underwater inspections.

Rear Adm. Linda Fagan replied that she didn’t know what information the local Guard command was relying on to make decisions.

“I know visual verification is key in a response such as this,” said Fagan, who is deputy commandant for operations, policy and capabilities. “I’m certain the team is working to do that, but I don’t know the time frame.”

Peters said many in Michigan are asking questions and “very concerned.”

If there were a Line 5 leak, “the economic and environmental impact would be devastating,” he said.

Both American Transmission and Enbridge had filed response plans with the federal Pipeline and Hazardous Materials Safety Administration that they are required to follow, said Murphy, who is based in northern Michigan.

Murphy said the damage to Enbridge’s line could be related to the vessel activity that may have caused damage to the American Transmission cables. He would not provide further details on the marine casualty investigation.

Enbridge confirmed dents to the east and west segments of Line 5 Tuesday with multiple tools that inspected the inside of the pipelines, company spokesman Ryan Duffy said. The American Transmission leak was identified when two electrical lines tripped offline April 1 and, shortly after, alarms alerted the company of changing readings on pumps that send the insulating fluid through the cables.

Duffy said Enbridge also plans to deploy an underwater vehicle with a camera in the next few days, weather permitting.

Snyder’s office said Wednesday the damage likely had been caused by an unidentified ship’s anchor. His office has requested Attorney General Bill Schuette pursue legal actions against the owner of the ship and others who may be responsible.

While the state respects the Coast Guard’s process, “the federal government’s standard for care and the sensitivity we have about our Great Lakes is different than what we have,” Calley said. “The idea to try and keep this quiet or secret or beyond immediately sharing information was just off the table.”

State Sen. Wayne Schmidt, R-Traverse City, blasted what he calls poor communications by Enbridge and American Transmission and called for the immediate shutdown of Line 5 until there is an independent verification of no potential for the risk of a leak.

“There is simply too much conflict and too great a risk to our state’s natural resources,” Schmidt said in a statement.

Both Enbridge and American Transmission said they have been in contact and working with the state, Coast Guard and federal pipeline agency regarding the incident.

Rep. Fred Upton, R-St. Joseph, also expressed frustration Thursday, saying he has raised his concerns directly with the U.S. Department of Transportation, the State of Michigan and Coast Guard representatives.

“There is no excuse for this ship’s action and no excuse for not protecting the straits and our Great Lakes,” Upton said in a statement.

“In the coming days and weeks, we’ll continue working hand-in-glove with all involved to ensure everything is safe. We are all watching.”

Upton on Thursday asked Energy Secretary Rick Perry for his department to study the potential impact of a Line 5 outage on consumers, noting the pipeline leads to the Marathon refinery in Detroit and the oil is wholesaled throughout the Midwest. Perry accepted.

“I think our common sense collectively tells us that if we lose a major line to a refinery like that, it’s going to have a negative impact — not only on the consuming public but also ... on the national security side of it,” Perry said at a House hearing.

Murphy said roughly 270 gallons of the estimated 800 gallons of mineral oil remaining in the line has been removed through vacuum trucks on shore.