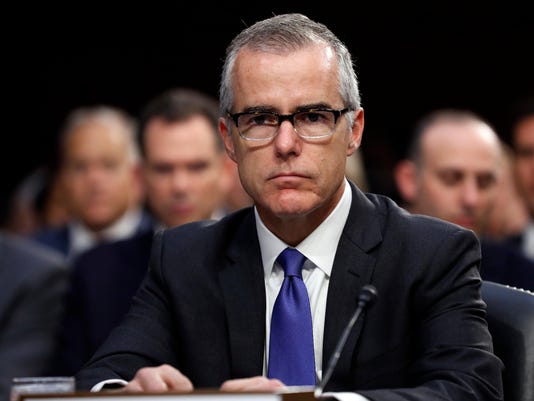 Washington – Andrew McCabe, the fired FBI deputy director, misled investigators and his own boss about his role in a news media disclosure about Hillary Clinton just days before the 2016 presidential election and authorized the release of information to “advance his personal interests,” according to a Justice Department watchdog report .

The inspector general report concludes that McCabe allowed FBI officials to disclose non-public information to a Wall Street Journal reporter for a story about an investigation into the Clinton Foundation, violating agency rules, and then misled FBI officials when questioned about it. It also reveals starkly contradictory accounts from McCabe and Comey about how the conversations with the reporter had come to take place.

McCabe, who was fired last month just two days before his scheduled retirement, denied the report’s allegations in a detailed rebuttal statement. He said that when he believed his answers to the inspector general were misunderstood, he went back and tried to correct them.

McCabe’s statement noted that as deputy director he had full authority to authorize sharing information with the media and said he permitted subordinates to do so in this case to correct a false narrative that he had tried to stymie an FBI probe into the Clinton Foundation.

The conversation “was done to protect the institutional reputation of the FBI as a non-political and professional investigative agency, and therefore was squarely within the public interest exception to the FBI’s prohibition on sharing sensitive material,” the statement said.

McCabe has also said his dismissal was part of the Trump administration’s “ongoing war” on the FBI and special counsel Robert Mueller’s Russia investigation, adding that he was singled out because of the “role I played, the actions I took, and the events I witnessed in the aftermath” of Comey’s firing.

The inspector general report does not square with the Republican narrative of the FBI as a politically biased institution, since the Oct. 30, 2016, story contained derogatory information about Clinton and underscored FBI interest in investigating her foundation. But its conclusion may also be hard for Democrats to embrace, given its harshly critical suggestion that McCabe had put his personal reputation above the interests of the FBI.

The president has made a concerted, Twitter-driven effort to impugn McCabe as a partisan hack, accusing him of covering up unspecified “lies and corruption” at the FBI and calling his firing a “great day for Democracy.”