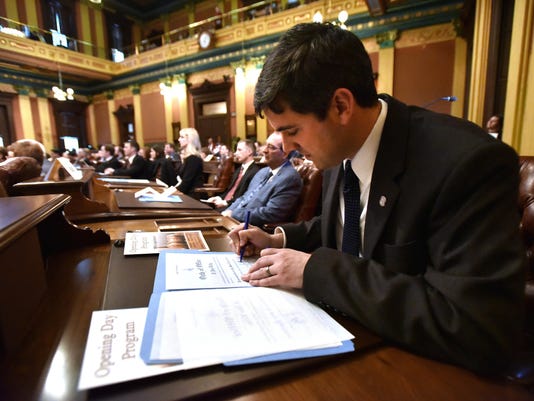 Rep. Jim Lilly, R-Holland, signs his oath of office as the Michigan House of Representatives convenes to start the new year in the Capitol in Lansing on January 11, 2017.(Photo: Dale G. Young / The Detroit News)Buy Photo

Lansing — Legislation that would put environmental decision-making authority into the hands of a private-sector panel passed out of House committee Wednesday, as lawmakers decided to allow lobbyists and non-Michigan residents to weigh in on the decisions.

The bill has been opposed by environmental groups who have likened the legislation to the “fox guarding the hen house.” The Michigan Department of Environmental Quality, led by former oil and gas industry lobbyist Heidi Grether, submitted written opposition last week to the bills.

Rep. Jim Lilly, R-Park Township, said the legislation should increase accountability at the Michigan Department of Environmental Quality. Supporters of the legislation include groups from oil, gas, agriculture and electricity industry as well as the Michigan Chamber of Commerce.

Passed by the Senate in January, the package of bills would create an 11-member Environmental Rules Review Committee to oversee rule-making at the DEQ.

Voting members on the rule review committee would include six people from industries such as oil and gas, agriculture, manufacturing, and public utilities, and other members representing environmental groups, local government and the public. The bill lets a lobbyist to be appointed to the committee if he or she does not work for more than one client.

Two other bills would appoint an expert panel to consider permit application appeals and create an Environmental Science Advisory Board to advise the governor on environmental issues.

Rep. Erika Geiss, D-Taylor, said an unelected body should not be able to override the DEQ’s regulators.

“This is abdicating our legislative and constitutional responsibility” to protect natural resources, Geiss told reporters Wednesday. “This is putting it into the hands of an unelected body that is not beholden to the public at all the way that we are legislatively.”

Committee members amended the legislation to clarify conflict of interest language regarding the permit appeal panel, but put no such restrictions on the Environmental Rules Review Committee.

The Republican panel’s majority rejected several proposed amendments from Democratic lawmakers that would have barred lobbyists and non-Michigan residents from serving on the panel.

Lilly said lawmakers would trust the governor to appoint rules review members who do not have apparent conflicts of interest.

“Some lobbyists are experts in these subject matters,” Lilly said. “And, again, if they have a perspective to bring that’s of value to Michigan, I don’t know that we want to bar them just by the nature of within the past five years they’ve been a lobbyist.”

Other rejected amendments would have made the groups advisory, increased the number of representatives from local government and general public, and barred people who previously worked for companies with questionable environmental track records.

The Michigan League for Conservation Voters called on lawmakers to reject the bills. Executive Director Lisa Wozniak said in a Wednesday statement that a stronger DEQ was needed to address concerns with contaminated drinking water and Enbridge Energy’s aging Line 5 oil pipeline.

“As we saw in Flint, a weakened DEQ can lead to disaster, and if this legislation goes forward, the health of Michigan families will be put at risk,” Wozniak said.