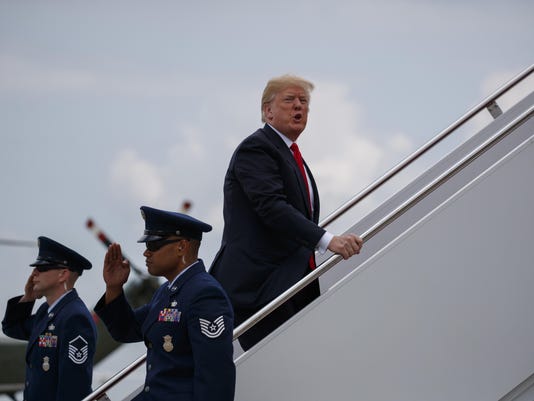 President Donald Trump yells to reporters as he boards Air Force One for a trip to New York to discuss immigration policy, May 23, 2018, in Andrews Air Force Base, Md.(Photo: Evan Vucci / AP)

Washington – President Donald Trump says he opposes any immigration legislation that doesn’t include “a real wall” along the Mexican border and “very strong border security,” and he’s questioning the need for judges to determine immigration claims.

Moderate House Republicans are pushing a deal that could lead to citizenship for young “Dreamer” immigrants brought to the U.S. illegally. But Trump told “Fox & Friends” in an interview that aired Thursday that unless a bill “includes a wall, and I mean a wall, a real wall, and unless it includes very strong border security, there’ll be no approvals from me.”

Trump said the United States had “the worst immigration laws in the entire world by far” and said he wanted a comprehensive deal that included all of his priorities. “I think it’s time to get the whole package,” he said.

Trump’s comments, taped Wednesday, came as immigration talks are underway among House Republicans, with moderates seeking a way for hundreds of thousands of young immigrants to stay permanently in the U.S. But conservatives say they have no interest in giving what they call “amnesty” to people who came illegally.

Moderates trying to force votes on the issue gained their 21st GOP signature Wednesday. With just four more, they should be able to overcome leadership objections and have votes on immigration bills in late June. House leaders plan a pivotal closed-door GOP immigration meeting on June 7.

Trump also took issue with the immigration court system, saying other countries have “security people” who “stand there and say you can’t come in” rather than judges who decide immigration claims.

“Whoever heard of a system where you put people through trials? … We’re going to change the system,” Trump said.

The administration is dealing with an enormous number of immigration cases along the U.S.-Mexico border, as a sharp increase in deportation arrests under Trump has pushed the backlog above 650,000 cases. Attorney General Jeff Sessions, who oversees immigration courts, has sought major changes to the long-clogged courts.

The Justice Department recently announced that more prosecutors and judges will be assigned to help whittle away at the caseload. And the administration has also introduced production quotas for immigration judges, raising concern among judges and attorneys that decisions may be unfairly rushed.