Nikki Haley pokes fun at herself at NY charity

“...Do not under any circumstances make any jokes about the president. So good night everybody!” quipped Haley

Nikki Haley pokes fun at herself at NY charity 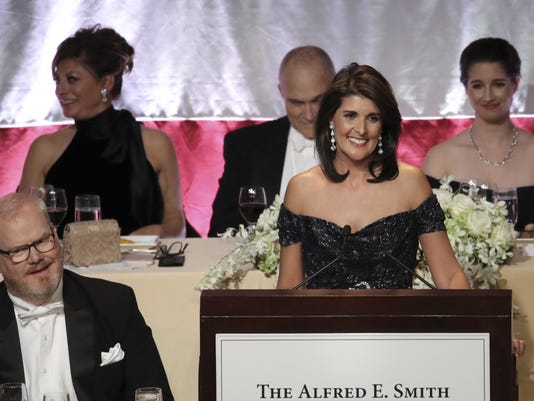 New York – Nikki Haley was introduced as the next president of the United States by comedian Jim Gaffigan at a white-tie gala in New York Thursday evening where the outgoing U.N. Ambassador poked fun at her own Indian heritage, her boss and the current political climate.

“Everyone in Washington called me with advice about this speech. They all said the same thing. Do not under any circumstances make any jokes about the president. So good night everybody!” quipped Haley.

“Actually the president called me this morning and gave me some really good advice. He said if I get stuck for laughs, just brag about his accomplishments,” she added.

The former Republican South Carolina governor made the jabs at the annual Alfred E. Smith Memorial Foundation Dinner, named after the former New York governor, who was the first Catholic to receive a major party nomination for president when he unsuccessfully ran in 1928.

“So I really am super excited to be at the Al Smith Dinner,” Haley remarked. “As a member of the Trump cabinet it is a thrill to be out to dinner without being harassed.”

Two years ago, then Republican presidential nominee Donald Trump and Democratic rival Hillary Clinton traded caustic barbs at the charity event meant to raise money for impoverished children. At the time, Trump drew boos when he said of Clinton, “Here she is tonight, in public, pretending not to hate Catholics.”

Haley, who recently announced she was stepping down at the end of the year, joked that last year’s event with “boy scout” House Speaker Paul Ryan was “a little boring.”

“So this year you wanted to spice things up again, right? I get it. You wanted an Indian woman, but Elizabeth Warren failed her DNA test.”

“Actually, when the president found out I was Indian American, he asked me if I was from the same tribe as Elizabeth Warren,” said Haley.

The Democratic senator from Massachusetts and possible 2020 presidential candidate recently released DNA test results that genealogists say show she could be anywhere from 1/64th to 1/1024th Native American.