A national Republican group is reentering the Michigan race between GOP Rep. Mike Bishop and Democrat Elissa Slotkin with an ad hitting a verbal flub 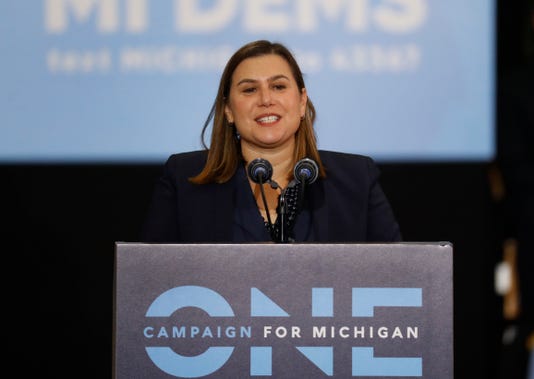 Elissa Slotkin, Democratic congressional candidate from Holly, speaks during a Friday rally in Detroit headlined by former President Barack Obama. (Oct. 26, 2018). A verbal flub during her speech has been turned into an attack ad by a super political action committee backed by the U.S. House Republican leadership.(Photo: Paul Sancya, AP)

Washington — With a week until the election, a national Republican group is re-entering the hotly contested Michigan race between GOP Rep. Mike Bishop and Democrat Elissa Slotkin that it previously abandoned.

The Congressional Leadership Fund, a super political action committee endorsed by House Republican leadership, says it has bought $1 million worth of airtime to run an ad in the 8th District that highlights Slotkin's blunder at a recent campaign rally.

The 30-second spot aims to tie Slotkin of Holly to House Democratic Leader Nancy Pelosi and starts airing in the Detroit market Wednesday, running through Election Day, according to CLF. Slotkin's campaign has argued that the commercial is deceptive.

The ad includes an abbreviated clip of Slotkin's remarks at a Friday rally in Detroit that featured President Barack Obama, for whom she worked in national security roles.  Her usual stump speech often laments the tone of politics, calling for elected officials to put "country before party."

But Slotkin flubbed that line Friday and said "party before country." The ad focuses on the flub, replaying it a couple of times and saying it shows she will back Pelosi, "not you," in Congress.

Rally-goers began murmuring, and Slotkin corrected herself about 15 seconds later after prodding from the audience, laughing at her mistake, according to video of the event.

"I was like, this is a really tough room," Slotkin said at the rally. "Sorry. It is always country before party."

Bishop's campaign pounced, saying Slotkin's initial words were "no gaffe, it was her true intentions."

"In the heat of a campaign, sometimes the mask slips and the truth comes out," Stu Sandler, a Bishop consultant, said in a statement.

"For Elissa Slotkin, her admission she would put party before country was one of those moments."

The national group, which seeks to protect the GOP majority, last month canceled $2.1 million worth of air time it had reserved in Michigan to help defend Bishop, a Rochester Republican whom Slotkin has outraised nearly 2 to 1.

Slotkin's campaign said Tuesday Bishop and his allies are using her remarks out of context after spending weeks trying to paint Slotkin — who served three tours in Iraq as a Central Intelligence Agency officer — as part of the "liberal mob."

"Now they're trying to claim that she is unpatriotic, taking video completely out of context. Slotkin has publicly, repeatedly said that we need to put country over party —something she has done every day that she served protecting our country," Slotkin spokeswoman Laura Epstein said.

"Slotkin misspoke at the rally and corrected herself within the minute. This is a desperate attempt to smear her and the worst example of politics as usual."

The contest has already broken the state record for spending on a U.S. House race, with outside groups pouring over $12 million into the race, according to federal disclosures.

The biggest spender has been the National Republican Congressional Committee, which as invested over $3 million in the race.

The candidates themselves had raised another $9 million through Oct. 17, with Slotkin bringing in $6.2 million and Bishop $3.17 million.