Trump backs McDaniel for another term as RNC chair

President Donald Trump has tapped Michigan native Ronna McDaniel for another term as chairwoman for the Republican National Committee.

Trump backs McDaniel for another term as RNC chair 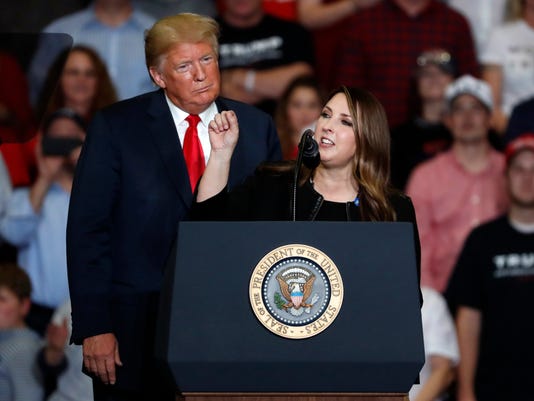 President Donald Trump has backed Michigan native Ronna McDaniel for another term as chairwoman for the Republican National Committee.

“As RNC Chair Ronna McDaniel oversaw history defying gains in the Senate and unprecedented fundraising strength. I have asked her to serve another term for my 2020 re-elect, because there is no one better for the job!”

McDaniel is the former chairwoman of the Michigan Republican Party and has served as the head of the Republican National Committee since January 2017. She is the granddaughter of former Michigan Gov. George Romney and niece of U.S. Sen.-elect Mitt Romney.

McDaniel is a vocal Trump supporter and helped to deliver Michigan to him in 2016.

"It has been a privilege to serve as RNC Chairman under President Trump, and I am honored to have the opportunity for a second term," McDaniel said in a statement Thursday night.

"Thanks to President Trump’s leadership, we have hit historic milestones for fundraising and voter engagement, and I’m confident we can do even more as we work to re-elect the president in 2020. I’m excited to continue our fight for the president’s America-first agenda and for an even better future for the American people."

Republican National Committee's leadership positions are voted on by its 168 members. The next vote will take place at the committee's winter meeting in January.

She succeeded Reince Priebus as RNC chair and was the second woman elected to the position. The first female chair was Mary Louise Smith of Iowa in the 1970s.

When McDaniel became chair the GOP had control of the White House, Congress, 33 governorships and 32 legislatures, but this year’s general election has changed those dynamics.

Democrats will soon control the U.S. House, swept Michigan’s governor, attorney general and secretary of state offices in the traditional battleground state, and picked up more seats in Michigan's state House and Senate. Republicans, meanwhile, have expanded their grip on the U.S. Senate.