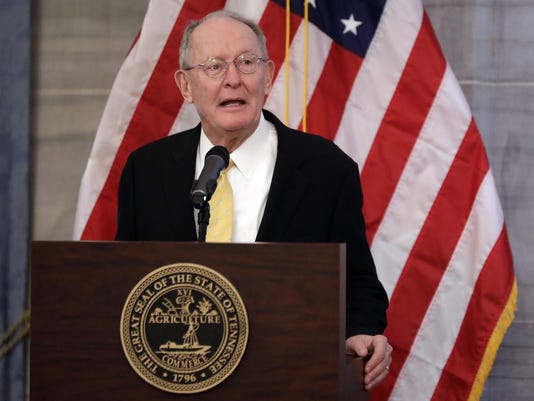 U.S. Sen. Lamar Alexander, R-Tenn., speaks at the unveiling of the official portrait of Tennessee Gov. Bill Haslam, Dec. 17, 2018, in Nashville, Tenn. Alexander said Monday he is not running for re-election in 2020.(Photo: Mark Humphrey / AP)

Alexander said in a news release that he’s deeply grateful for being elected to serve more combined years as governor and senator than anyone else in Tennessee. But he said now it’s time for someone else to have that privilege.

Alexander also was a candidate for the Republican nomination for president in 1996 and 2000 and was U.S. education secretary from 1991 to 1993 under George Bush.

After leaving the governor’s office, Alexander also served as president of the University of Tennessee from 1988 to 1991.

“I have gotten up every day thinking that I could help make our state and country a little better, and gone to bed most nights thinking that I have,” Alexander said in his statement. “I will continue to serve with that same spirit during the remaining two years of my term.”

Alexander had shown signs that he might have been gearing up for another re-election. For instance, his campaign had just ordered up a poll that found he was still very popular among Tennessee Republican primary voters.

Now Alexander’s announcement sets off a scramble for candidates to replace him just a month after the race to replace Corker was finally settled. In the state’s most expensive race ever, Blackburn won by about 10 percentage points against former Democratic Gov. Phil Bredesen.

Corker on Monday called Alexander “the legislator of the decade because of the effective way he has worked across the aisle to pass legislation that directly affects the lives of so many throughout our state and around the country.”

Alexander attended the unveiling of Haslam’s official gubernatorial portrait shortly before the announcement. The senator did not mention his re-election decision at the event.

In a statement afterward, Haslam did not touch on whether he was interested in running to replace Alexander.

“No one has served our state longer as a governor and senator, and few, if any, have served it better than Lamar,” Haslam said.