Snyder calls for civility as he leaves office with complicated legacy

Michigan Gov. Rick Snyder and Lt. Gov. Brian Calley reflect on the past eight years as they prepare to leave office.

Snyder calls for civility as he leaves office with complicated legacy 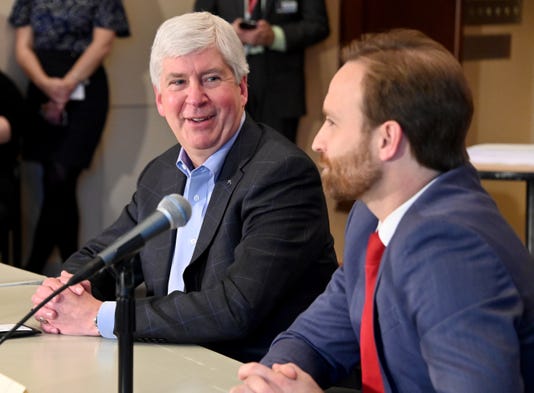 Lansing — Term-limited Michigan Gov. Rick Snyder does not plan to remain active in politics after leaving office Tuesday, but he's not ruling out one last campaign. This one, for civility.

The 60-year-old Ann Arbor Republican will depart with a complicated legacy marked by statewide economic gains, signs of a sustained resurgence in Detroit, a tax overhaul that benefited business, a right-to-work law that infuriated unions and an environmental catastrophe in Flint.

Through the highs and lows, even his critics acknowledge Snyder has maintained decorum and continued to bang his drum to the beat of “relentless positive action,” an optimistic mantra he has espoused even as political rhetoric devolved around him the past eight years.

“Our country is in serious trouble because of the lack of civility at the national level,” said Snyder, who did not endorse GOP President Donald Trump in the 2016 presidential election and has criticized explosive language from politicians on both sides of the aisle. “That’s the greatest threat to our country.”

In an extended interview with The Detroit News this month, Snyder said he intends to continue his public calls for civility after leaving office. He will initially retreat to spend time with family but may eventually reappear to teach at the collegiate level, work with startup firms or serve as a policy expert in various fields, including mobility, artificial intelligence and cybersecurity.

“I would say policy, not politics,” the governor said with a grin.

Snyder’s optimistic attitude — and his penchant for long-term planning — make him stand out among Michigan governors, said Bill Rustem, who served as a top aide through 2014.

Rustem called Snyder’s work in Detroit the most important of the governor's tenure. Snyder guided the state’s largest city through a bankruptcy filing that “I’m not sure any other governor would have even understood how to do” and helped bail out Detroit’s debt-ridden public school district.

“He created an opportunity for Detroit to succeed, and they were in a position where that was nearly impossible,” Rustem said.

Snyder also orchestrated a deal to build a new international bridge over the Detroit River with Canada covering Michigan’s up-front costs, a project Democratic Gov.-elect Gretchen Whitmer has praised and intends to continue.

“They say President Trump can’t get Mexico to pay for a wall, but I don’t know, (Snyder) got Canada to build us a bridge,” Lt. Gov. Brian Calley, who is also term-limited, joked last week in a farewell speech as the governor looked on.

Snyder’s positive disposition has done little to quiet critics, including Senate Minority Leader Jim Ananich, D-Flint, who holds the administration responsible for the water contamination crisis in his city.

The ill-fated 2014 switch to Flint River water was approved by an emergency manager Snyder had appointed, and state regulators failed to ensure the city used proper corrosion control chemicals.

“You can be civil and you can make sure the people who work for you have integrity, and I think you can have both those things at the same time,” Ananich said.

“Civility is great, but being truthful with the public and the citizens of Michigan is much more important to me. It’s a nice tagline, but … his actions speak louder than words.”

Snyder’s most combative moment as a governor arguably occurred in 2013, when he told lawmakers to “take a vote, not a vacation.”

The state Senate had just adjourned for summer break without taking up legislation to expand Medicaid eligibility under the Affordable Care Act, which lawmakers would eventually approve in a deal considered one of Snyder’s most notable bipartisan accomplishments.

Legend had it that Snyder only used a swear word on two occasions while working as an executive at the Gateway Inc. computer company in California, “but I got him close to it,” recalled former Senate Majority Leader Randy Richardville, R-Monroe.

“There’s no question he did have that passion, and he did get angry. He got a look, a steely-eyed look like laser eyes on cartoons. You could actually sense his blood pressure rising.”

Snyder took office in 2010 without any legislative experience, and it showed, Richardville said. He occasionally rubbed lawmakers the wrong way, especially early in his tenure, when he doggedly pursued his own priorities without understanding the process.

“But he was the best problem solver that I’ve seen in a long time,” Richardville said. “He took problems that piled up on his desk and worked on them until they went away.”

Snyder’s “relentless positive action” catchphrase is more than an election slogan, those close to him say. In fact, it was a personal mantra before he ever ran for office, said John Weaver, who helped run Snyder’s 2010 campaign.

“'One tough nerd' came from us, from me,” said Weaver, referencing Snyder’s self-description in a Super Bowl campaign ad that boosted his profile. “But relentless positive action is the way that he guides his life, and that came from him.”

Weaver said Snyder has personally chided him for going negative, “particularly in that first election campaign” eight years ago.

“We’re obviously in this momentary period where swamp fever has impacted our party particularly, and both parties to some degrees,” said Weaver, a Trump antagonist and adviser to Republican Ohio Gov. John Kasich, who has not ruled out another presidential run in 2020. “But I think Rick’s call (for civility), along with that of governors Kasich, Charlie Baker (Massachusetts) Larry Hogan (Maryland) and Brian Sandoval (Nevada) will ultimately win out.”

Calley, who was the youngest lieutenant governor in the country when Snyder picked him as his running mate eight years ago, credits the businessman governor for empowering him to expand the traditional role of the right-hand man.

“He didn’t know the rules about the things you could and could not do, and so he just did what was right,” said Calley, a former state legislator and banker. “And breaking down those kinds of barriers made all the difference.”

Instead of working on separate floors, Calley and Snyder worked in offices next to each other in the Romney Building. The lieutenant governor helped lead major initiatives to reform autism insurance, overhaul the state tax code and scrap the personal property tax on manufacturing equipment.

Calley, who is now 41 years old, hasn’t decided whether he’ll run for political office again in the future but does not regret running for governor this year despite finishing second to nominee Bill Schuette in a bruising Republican primary.

The “powers that be” in the party did not want him to run and asked him to reconsider, Calley said, “but I thought it was important to have this campaign include the story about what happened in the past eight years, and I didn’t see any other candidates that represented that.”

Snyder, who publicly apologized for the Flint water crisis during his 2016 State of the State address and testified before a congressional panel later that year, said he will never forget the city “because it was a terrible thing to have happen.”

“We had failures at all levels of government, but some of the people involved, particularly the so-called experts in water, made some bad calls in my view, and they worked for me.”

But Snyder contends the Flint water crisis spurred positive change in state government that will live on after his tenure, including adoption of the nation’s toughest drinking water standard for lead, which local governments have sued over as an unfunded mandate that will require many to replace aging pipes.

Flint will be a significant part of Snyder’s legacy, but his reputation may grow over time as voters see the results of his long-term approach to solving problems, Rustem said.

“Like (Gov. George) Romney who redid the constitution, like (Gov. Bill) Milliken who did all the environmental protection leading the nation and the world in that area, Snyder is going to be remembered for the long-term, particularly Detroit and the budget,” Rustem said.

Snyder, for his part, is hesitant to describe his own legacy.

“I’ve never viewed that as relevant,” he said. “I asked to be measured on two things: Did I do what I said I was going to do? And secondly, did I build a long-term foundation for success that has nothing to do with me? And I’m satisfied we built a strong foundation.”