Michigan's House aims to reform the state’s civil asset forfeiture laws by requiring a conviction before police can confiscate cash or other property. 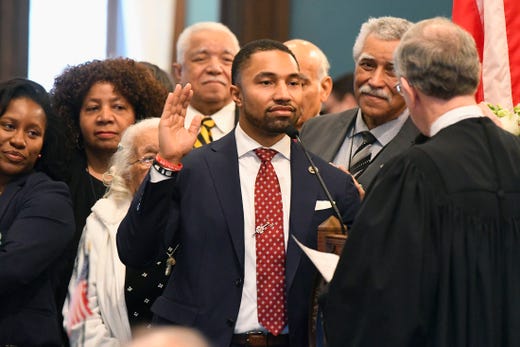 Incoming State Senator Adam Hollier D-Detroit, is surrounded by his family on the floor of the Senate as he is sworn in by Chief Justice Stephen Markman in Lansing, Wednesday, January 9, 2019. Rod Sanford, Special to The Detroit News
Fullscreen 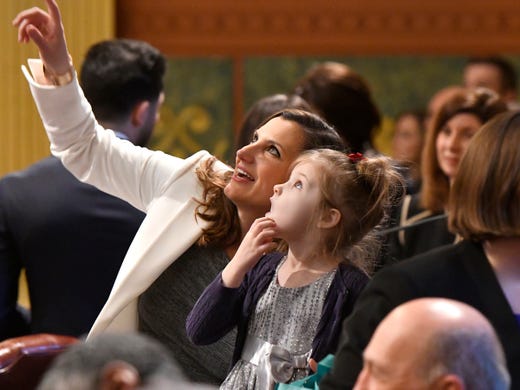 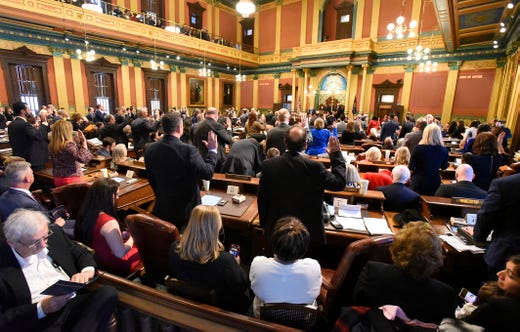 Members of the State House of Representatives are sworn in. Rod Sanford, Special to The Detroit News
Fullscreen 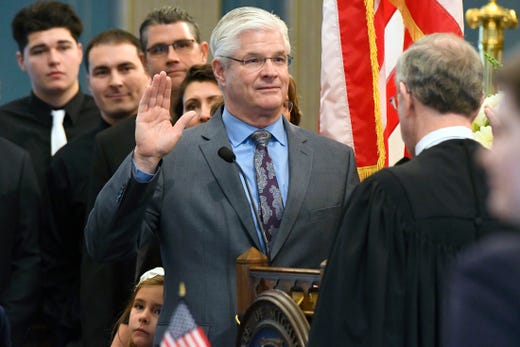 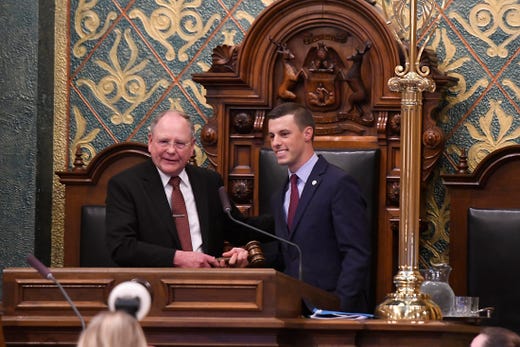 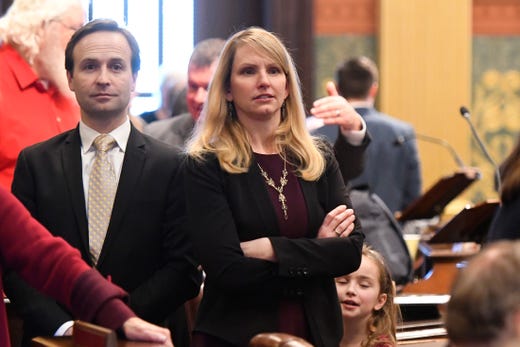 Rep. Julie Calley, R-District 87, and husband (and former Lt. Gov.) Brian Calley, left, wait for Representatives to get to their new seats after swearing in and opening ceremonies for the 100th Legislature Wednesday in Lansing. Rod Sanford, Special to The Detroit News
Fullscreen 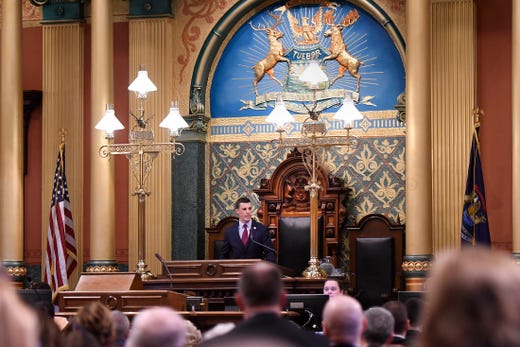 New Speaker of the House Lee Chatfield R-Levering, speaks to the house members and guests. Rod Sanford, Special to The Detroit News
Fullscreen 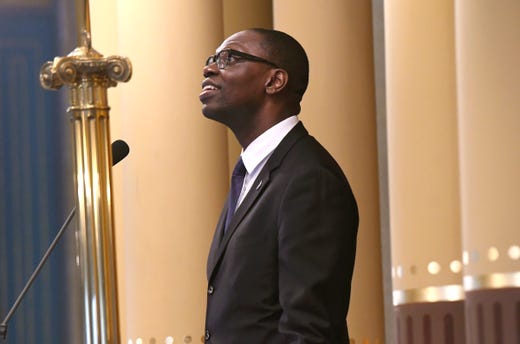 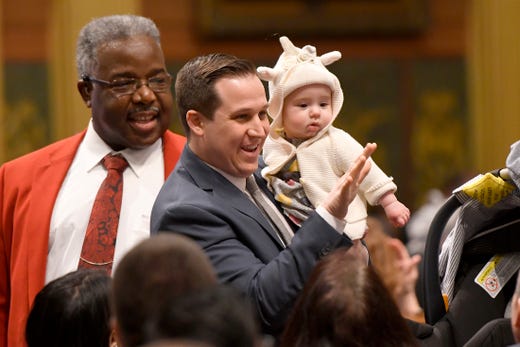 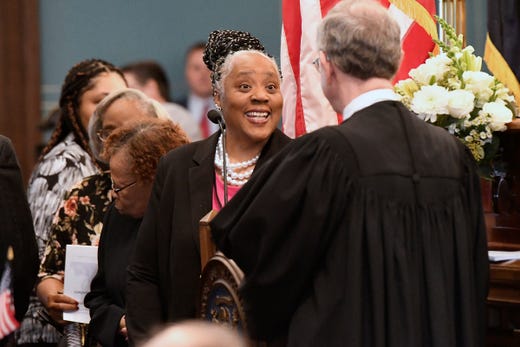 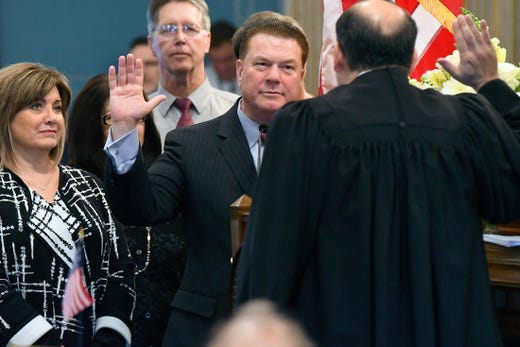 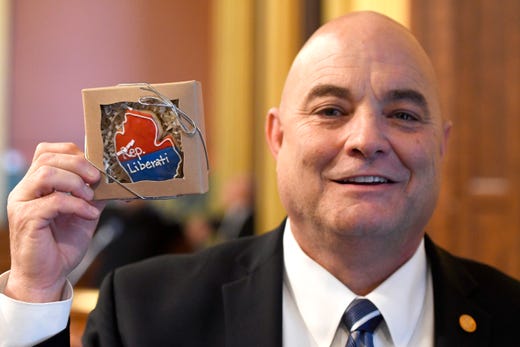 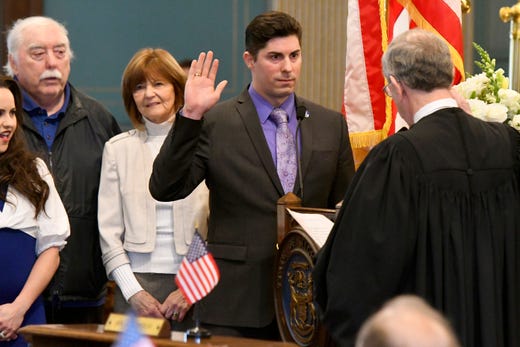 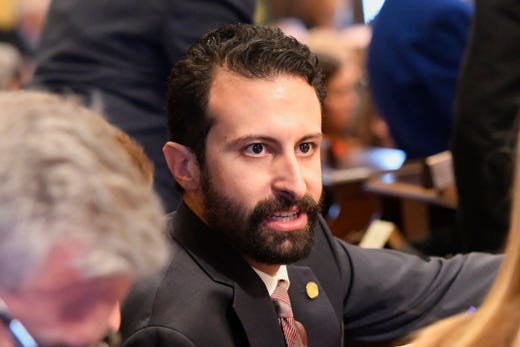 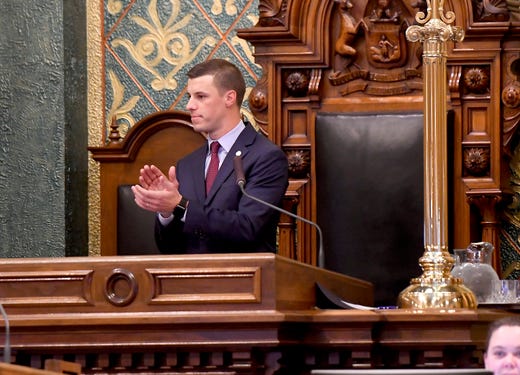 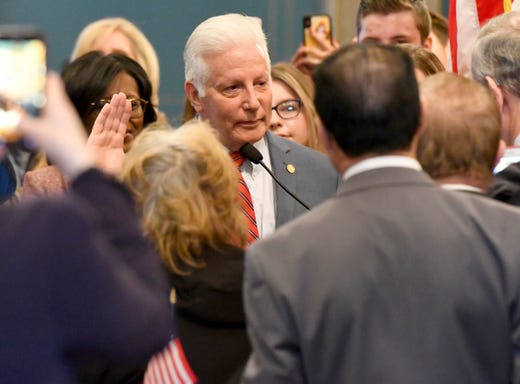 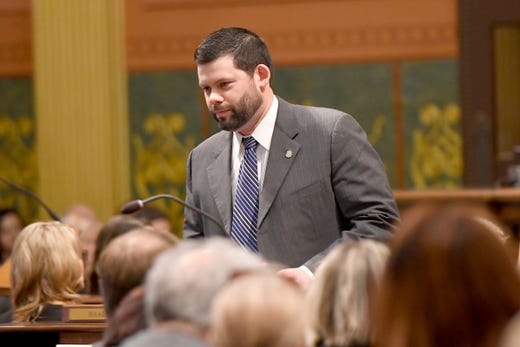 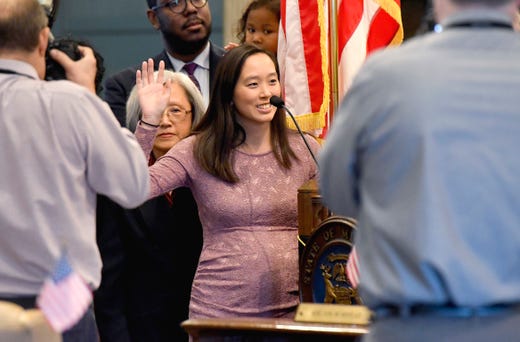 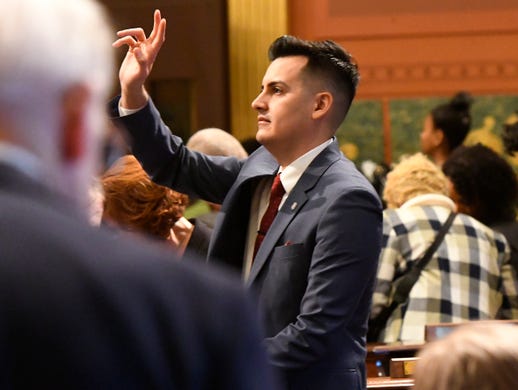 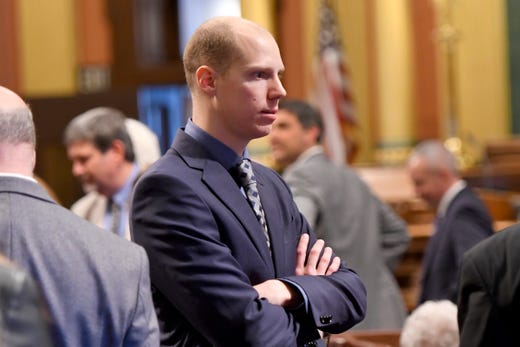 State Rep. Steven Johnson, R-72nd District, looks on from the floor of the House during opening ceremonies. Rod Sanford
Fullscreen 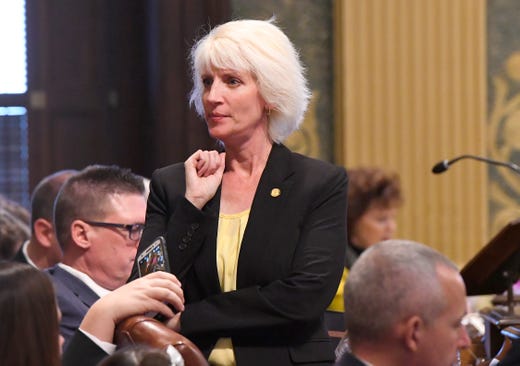 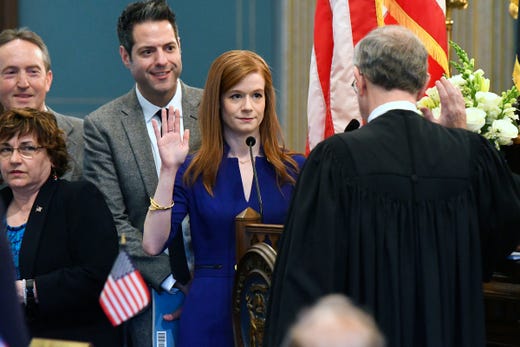 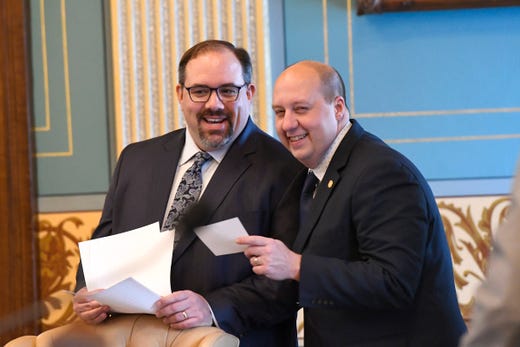 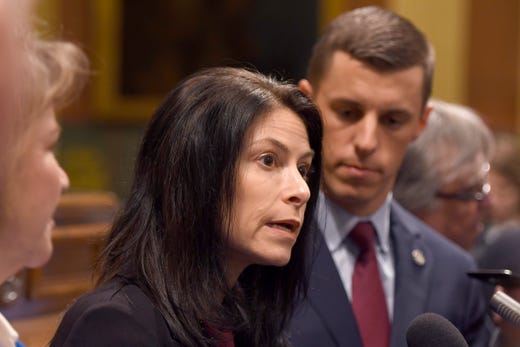 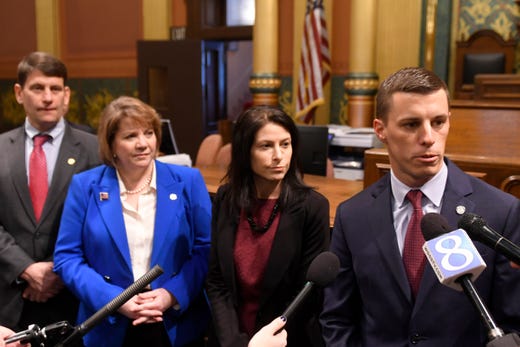 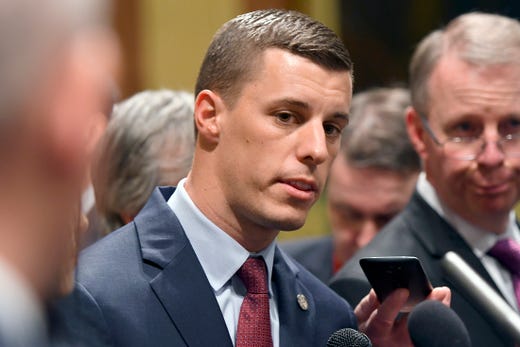 New Speaker of the House Lee Chatfield R-Levering, speaks to the media after the opening ceremonies. Rod Sanford, Special to The Detroit News
Fullscreen 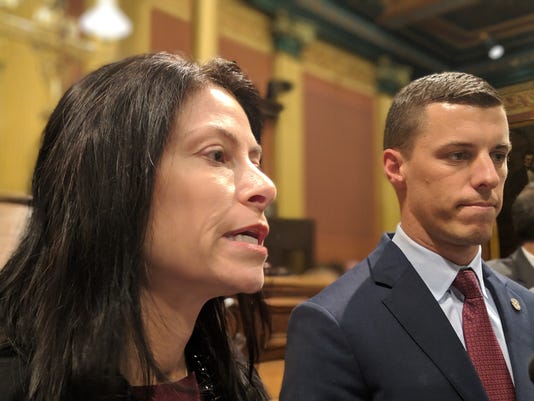 Lansing — The Michigan House is taking aim at the state’s civil asset forfeiture laws with a new bipartisan plan that would require a conviction in most cases before police can permanently confiscate cash, cars or other property from residents.

Republican House Speaker Lee Chatfield of Levering, formally elected to the leadership post by his peers on Wednesday, announced the renewed reform push as the 100th Legislature convened for the first time. He was joined at a press conference by Democratic Attorney General Dana Nessel.

"We can work together, and we will work together,"Chatfield said, referencing the Republican-led Legislature and Democratic officials like Nessel and Gov. Gretchen Whitmer. "This is a step in the right direction for the people of our state and for law enforcement."

Current Michigan law allows police to take property from suspected criminals even if charges are never filed. The legislation would require a conviction to forfeit property worth less than $50,000 and raise the standard of evidence to permanently confiscate more valuable property.

Nessel, a former private practice attorney and assistant Wayne County prosecutor who took office Jan. 1, said Chatfield approached her several weeks ago about areas they could work together in a bipartisan fashion, and civil asset forfeiture was "something we both agreed upon."

While there are a few details of the legislation she might like to modify, Nessel said she "conceptually supports" the two-bill House package, which would strengthen "due process rights for everyone."

"It doesn't create a very good connection between law enforcement and the community when people feel (like) the police are wrongly taking their assets," she said. "And so I think this is actually going to make those relationships stronger."

The civil asset forfeiture bills were the first House measures introduced in the two-year session, a statement of priorities by the lower chamber. Other bills reintroduced Wednesday would subject the Legislature and governor's office to public records requests.

The House approved a similar forfeiture reform plan last year, but the legislation died in the Senate Judiciary Committee. That is unlikely to happen again because the House sponsor was elected to the Senate and will now chair that committee.

“I’m glad it’s a priority for them, because it’s a priority for me,” said Sen. Pete Lucido, a Shelby Township Republican who told The Detroit News that Senate leadership knows his position on the issue. “Somewhere down the line, I think both chambers are going to have to go ahead and do what they need to do.”

Lucido said the measure he sponsored last year would have made meaningful reforms to the state’s civil asset forfeiture law. He questioned opposition from law enforcement groups.

“I don’t see why they would feel offended by it,” Lucido said. “They still have every right to take property, they just have to wait for a conviction. It’s a property right and it’s also a constitutional right.”

In 2016, law enforcement agencies forfeited more than $15 million cash and property from suspects, but never filed charges in nearly 10 percent of the 5,290 cases, according to reports required under a 2015 law.

Efforts to reform forfeiture laws have brought together disparate groups from opposite sides of the political spectrum, including the left-leaning American Civil Liberties Union of Michigan and the free-market Mackinac Center for Public Policy.

Joined by their families and friends, new and returning state lawmakers packed the state House and Senate earlier Wednesday for their ceremonial oaths of office.

Republicans return majorities in the House and Senate, but Democrats picked up several seats in each chamber and swept the top of the ticket, led by Whitmer.

Little space was available on the House floor prior to the swearing in of 110 representatives, who took the oath of office then chose seats in the crowded chamber.

Chatfield was joined on the House floor by eight former speakers dating back to terms in the late 1980s as he took over as House speaker for the 100th Legislature.

The Levering Republican vowed to work across the aisle to address Michigan’s problems and avoid “extreme partisanship,” noting that “the success of Gov. Whitmer means the success of Michigan.”

The “single largest issue” facing the state is high auto insurance and solutions cannot be dictated by the insurance industries or health executives, Chatfield said.

“As the automotive state, it is unacceptable that we pay the most in the country for car insurance,” he said.

"While the hangover of lame-duck still lingers, we have a new opportunity to improve and change legislation passed by this chamber," Ananich said.

New Senate Majority Leader Mike Shirkey, R-Clarklake, called for bipartisan cooperation. But with Whitmer now in office, Shirkey said he and Chatfield would "hold the line" on efforts to undermine laws adopted by the GOP in the past eight years.

“We must be vigilant and careful in assessing changes to the dynamic that Michigan now enjoys and remain disciplined in adopting policies that ensure continued growth," Shirkey said.

Whitmer, in a tweet, congratulated all lawmakers who were sworn in. "I’m eager to get to work with the 100th #MILeg to solve problems and build bridges here in Michigan," she wrote.

The new-look Michigan Senate includes eight returning members out 38 senators. A handful of new senators, including Betty Jean Alexander of Detroit and Mallory McMorrow of Royal Oak, are new to elected office.