The meeting on Capitol Hill came on the same day that Russian officials postponed a scheduled visit by U.S. embassy staff with Paul Whelan, 48, in prison.

Stevens' office released a statement and photo based on her meeting with Huntsman.

"I remain concerned about the ongoing imprisonment of Mr. Whelan," said Stevens, D-Rochester Hills, adding that she requested additional briefings from the State Department about Whelan's detention.

"Congress must be fully informed and consulted on this matter going forward. I've also asked the State Department to stay in close communication with Mr. Whelan's family during this time as they deserve to have as much information as possible."

Huntsman met with Whelan on Jan. 2 in the Lefortovo Detention Facility, accompanied by the head of American Citizen Services at U.S. Embassy in Moscow. 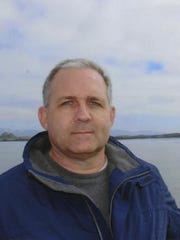 This undated photo provided by the Whelan family shows Paul Whelan in Iceland. Whelan, a former U.S. Marine arrested in Russia on espionage charges, was visiting Moscow over the holidays to attend a wedding when he suddenly disappeared, his brother said Jan. 1, 2019. (Photo: AP)

Whelan was arrested in late December and charged under Article 276 of the Russian Penal Code for Espionage, according to the State Department.

Earlier this week, Sergei Lavrov, Russia's foreign minister, said during a news conference in Moscow that Whelan "was caught red-handed."

An online Russian news site, citing anonymous sources, said earlier this month Whelan was detained five minutes after receiving a thumb drive containing the names of employees of a secret Russian state agency, according to Reuters and USA Today.

Whelan, a former U.S. Marine, is the head of global security for Auburn Hills-based Borg Warner, an auto parts supplier. His family has said he was in Russia for a friend's wedding.

Whelan, who lives in Novi, holds citizenship from the U.S., Britain, Ireland and Canada. Russia promised to permit consular visits while he is imprisoned.

U.S. embassy consular officers' planned Thursday visit with Whelan had been approved by the Russian government, but that morning the Russian Ministry of Foreign Affairs said the visit would be postponed and rescheduled at the request of the Federal Security Service (FSB), according to the State Department.

"We are strongly concerned about the delay in consular access both to Mr. Whelan and, more broadly, to U.S. citizens in Russia and about Russia’s lack of adherence to the Bilateral Consular Agreement between our two countries," a State Department official said in a Friday statement.

"We have expressed our concern through diplomatic channels, and we call on Russia to meet its treaty obligations. We continue to urge Russia to follow international law and provide for swift, fair, and transparent judicial processes for detained U.S. citizens."

Whelan's twin, David Whelan, expressed disappointment that authorities blocked the visit, hoping it could soon be rescheduled and that British diplomats also would be provided access.

"These consular visits during Paul's detention will help ensure his continued health and well-being while the family continues to work with government officials to try to bring Paul home," David Whelan said.

He said a Wednesday visit by Irish officials “was very helpful and gave us an opportunity to receive specific guidance from Paul.”

The State Department said it remains in regular contact with the Whelan family and is working in close coordination with the embassies of other relevant countries to ensure consular access and due process for Whelan.

U.S. Secretary of State Mike Pompeo spoke this week with Canadian Minister of Foreign Affairs Chrystia Freeland about Whelan's case, according to the State Department.