Several Michigan members of Congress wondered why the same deal couldn't have been made 35 days ago before the shutdown began Dec. 22. 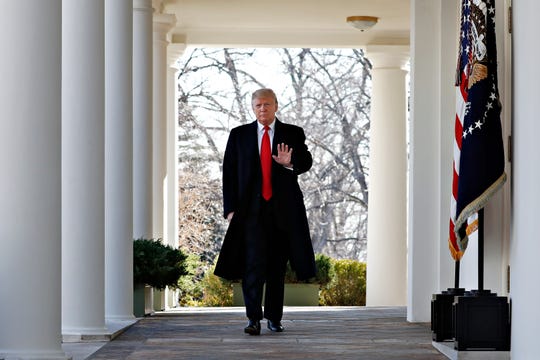 President Donald Trump waves as he walks through the Colonnade from the Oval Office of the White House on arrival to announce a deal to temporarily reopen the government, Friday, Jan. 25, 2019, from the Rose Garden of the White House in Washington. (Photo: Jacquelyn Martin, AP)

After insisting for more than a month on $5.7 billion for a border wall, Trump said he would sign a short-term deal with no wall funding to reopen the government and give lawmakers time to negotiate on border security.

“If we don’t get a fair deal from Congress, the government will either shut down on Feb. 15, again, or I will use the powers afforded to me under the laws and Constitution of the United States to address this emergency," Trump said at the White House.

“The president’s shutdown achieved nothing, but caused a lot of harm to working families, veterans and some of America’s most vulnerable," Levin said.

“This shutdown should never have happened in the first place, but I’m hopeful that this is finally the end."

Nationwide, roughly 800,000 federal employees were furloughed or forced to work without pay during the record-setting shutdown. An estimated 5,200 federal civilian workers were affected in Michigan, as well as roughly 1,000 Coast Guard personnel.

Rep. Fred Upton, R-St. Joseph, said it was "long past time to open our government again."

"We all knew both sides were going to have to give to end this nightmare and stop the madness as the consequences grew worse by the hour," Upton tweeted.

"Let’s hope we can put humpty-dumpty together again in the next couple weeks."

Several lawmakers wondered why the same deal couldn't have been made 35 days ago before the shutdown began Dec. 22.

“It should have never come to this," said Rep. Debbie Dingell, D-Dearborn.

"People were scared to death of how to pay their bills and worried that hits to their credit scores would affect background checks, security clearances, and future employment. All of Congress cares about keeping our nation secure. We have a lot of work to do to regain American’s trust in their government.”

"I am glad that the president will finally end this manufactured crisis that he himself created over a month ago," Kildee said.

"Democrats are ready to sit down and negotiate with the president on effective border measures that fix our broken immigration system. But we must never shut down the government — which hurts so many workers and our economy — over policy disagreements.”

"My priorities remain what they have always been: to secure our nation’s borders, deal with the humanitarian crisis at the border and reform our nation’s broken immigration system, which has been ignored for far too long," Mitchell said in a statement.

"In Congress, it is time for both sides of the aisle to pass legislation and funding that reflects the true needs of the people," Lawrence said in a statement. .

Rep. John Moolenaar, R-Midland, thanked federal employees "who worked hard to keep our country safe during this difficult time" while issuing a challenge to Democrats.

"Democrats need to come to the table and negotiate serious solutions for border security to protect the American people and fix a broken system,” he said.