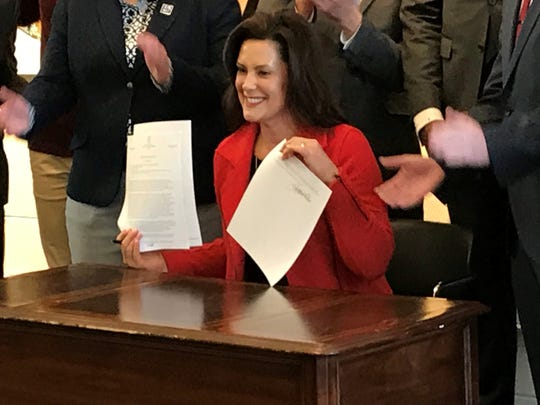 Gov. Gretchen Whitmer signed a non-discrimination edict with the goal of protecting state works from discrimination on the basis of their sexual orienation or gender in Ferndale Jan. 7, 2019. (Photo: James David Dickson/The Detroit News)

The state Civil Rights Commission panel is set to meet Friday in Detroit and will consider a resolution asking Democratic Attorney General Dana Nessel to review a 2018 interpretation holding that discrimination based on sexual orientation and gender identity is already illegal under state law prohibiting "sex" bias.

Former Attorney General Bill Schuette, a Republican, called the interpretation "invalid" in a July opinion, finding that the commission overstepped its authority through a form of lawmaking reserved for the state Legislature.

The Michigan Department of Civil Rights has continued to field complaints despite Schuette’s opinion and is now investigating eight cases of alleged discrimination based on sexual orientation and five based on gender identity or expression.

Department Director Agustin Arbulu said it is “important to know” where Nessel stands on the matter and he is “eager to hear” the commission debate, which had been scheduled for Monday but was postponed because of inclement weather.

The pending request for a new attorney general opinion was announced one day after Republican state House Speaker Lee Chatfield made clear he does not plan to hold a vote this term on any gay rights legislation.

“I do not believe we can pass this law while still protecting religious freedom,” Chatfield, R-Levering, said last week during a taping of “Off The Record” on WKAR-TV.  “You’ve seen these laws passed in other states where what happens, in my opinion, is a reverse discrimination against those who have religious beliefs.”

Chatfield, a former Christian school teacher and son of a Baptist pastor, has not been shy about his opposition to gay rights legislation. He won election to the state House in 2014 after knocking off an incumbent Republican he criticized for pushing to expand the state’s anti-discrimination law.

As speaker of the House, Chatfield said he personally would not discriminate against someone because of their sexual orientation, but he questioned how widespread such discrimination really is.

“If people today in Michigan were being discriminated against on a daily basis because of their sexual orientation, it would be statewide news and we’d all know it,” Chatfield said.

“Tell Lee Chatfield to call me,” Kaplan said, noting his nearly two decades of experience in the field. “Maybe he’s living in a bubble, but I can assure you that discrimination against LGBT people in the state of Michigan is alive and well.”

The religious liberty argument is a “political tactic” and a “plot to try to deny LGBT people the same fair treatment and dignity as everyone else in Michigan,” he added.

The Michigan Civil Rights Commission holds a hearing on the Flint water crisis. It has continued to investigate complaints of discrimination against gays and transgender individuals despite an attorney general's opinion to the contrary. (Photo: Steve Perez, The Detroit News)

Despite active investigations by the Michigan Department of Civil Rights, advocates say broader protections are still needed and should be written into state law to ensure lasting effect.

“We have taken steps forward to provide some remedies for LGBT discrimination,” Kaplan said, “but we still have a long way to go.”

Opposition by Chatfield and Shirkey, who sponsored a "religious freedom restoration" proposal in 2015 after Michigan’s same-sex marriage ban was ruled unconstitutional, would effectively maintain the status quo in Lansing.

The GOP-led Legislature in recent years has sat on gay rights bills despite support from a business coalition and gentle encouragement by former Gov. Rick Snyder, a Republican.

Shirkey recently told The Detroit News that Democratic efforts to expand the Elliott-Larsen Civil Rights Act to include new anti-discrimination protections for gay and transgender residents would likely be “heavily contested” in the GOP-led Legislature.

“If we can include protections for religious freedom in the Constitution, fine, but otherwise it’s not something that’s going to be a high priority,” the Clarklake Republican said.

Whitmer, who has called for an expansion of the civil rights law, marked her first month in office by signing an executive directive further protecting gay and transgender state employees from discrimination.

The directive also seeks to protect employees of state contractors or grant recipients by requiring non-discrimination language as part of any new deal. Unlike a directive Snyder signed late last year, Whitmer’s does not include an exemption for religious organizations.

The directive is not expected to affect a legal fight over a 2015 GOP law allowing faith-based adoption agencies to decline working with gay couples that want to adopt. But Nessel last week signaled she is seeking to settle the case.

Gay rights advocates hailed Whitmer’s executive directive but joined her in renewing calls for the state Legislature to guarantee similar protections for residents across the state.

“Gov. Whitmer is leading by example,” said Erin Knott, executive director of Equality Michigan. “It's an example that the Michigan Legislature should follow by taking immediate, meaningful action.”

Whitmer’s directive could face legal challenges from religious liberty advocates who have fought rules affecting religious business owners in other states. The U.S. Supreme Court last year ruled in favor of a Colorado baker who refused to make a custom cake for a same-sex couple because of his religious opposition to gay marriage.

Faith-based groups that contract with or receive grants from the state are studying the implications of Whitmer’s directive. Catholic charities “provide a vast array of services to vulnerable and poor populations” in Michigan, said David Maluchnik of the Michigan Catholic Conference, whose attorneys are reviewing the directive.

“The governor has her prerogative to run her state departments as she would choose,” Chatfield said last Thursday, but he told reporters he does not want to bow to “public pressure” on the issue.

"I probably would not allow a bill to come up that I believe would infringe on religious freedom," he said.