More than 1 in 3 Michigan voters haven't heard of freshman U.S. Sen. Gary Peters, according to a new statewide survey. 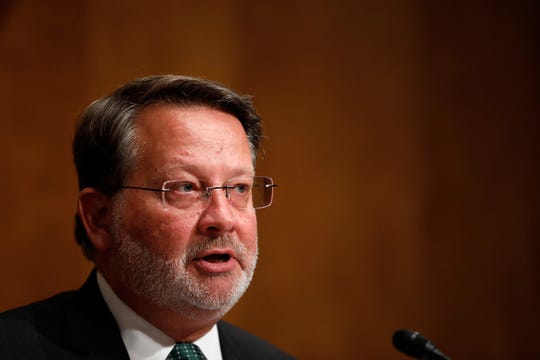 Freshman U.S. Sen. Gary Peters is beginning his re-election campaign with relatively low name recognition in Michigan, according to a new statewide poll.

A survey of 600 likely state voters conducted last week found that nearly 63 percent of Michigan voters recognize Peters — the state's junior senator — and about 36 percent have never heard of him.

It's early, and the Democrat from Bloomfield Township has almost two years to improve his name identification — particularly in out-state areas where he's less known, said Richard Czuba, who conducted the poll for the Lansing-based Glengariff Group.

"I think he’s got some work to do. I don’t think it’s fairly uncommon for a first-term U.S. senator to come in with some name ID battles," Czuba said.

"Frankly, he starts with higher name ID than pretty much anyone else who would likely challenge him. As we’ve seen in U.S. Senate races in Michigan, wherever the national tide goes is where the U.S. Senate race tends to go," he added. "The question is who will be his opposition?"

So far, no Republicans have stepped forward to challenge Peters, the top Democrat on the Senate Homeland Security Committee.

Potential candidates whose names have been floated include businessman and Iraq war veteran John James of Farmington Hills, who last year lost by 6.5 percentage points to Stabenow, D-Lansing. He's also mentioned as a potential candidate for the U.S. House.

Former U.S. Rep. Candice Miller, R-Harrison Township, would also be a formidable candidate with statewide name ID as a former secretary of state, though she's also mentioned as a potential gubernatorial candidate for 2022. Miller is Macomb County's public works commissioner.

The poll found about 31 percent of voters approve of Peters' job performance, and 15 percent disapprove.

“Day in and day out, Sen. Peters works hard to serve Michiganders. He will continue to focus on his job, and there will be plenty of time to discuss his record of delivering for Michigan families," said Sarah Schakow, a Peters spokeswoman.

"He’s not very well-known, but his numbers are decent. It’s not like he’s underwater on favorability," Kondik said.

"He’s not an institution like Carl Levin was or even Debbie Stabenow, who just won a fourth term. It also just goes to show that public awareness of their elected officials beyond the president can sometimes be low, particularly for someone who hasn’t been around all that long."

Peters, 60, served two terms in the U.S. House before in 2014 winning the open Senate seat vacated by Levin of Detroit, who retired.

Peters was the only Democrat elected to the U.S. Senate that year, defeating former Secretary of State Terri Lynn Land by 13 percentage points in what was a Republican year nationally, Czuba noted.

In late October 2014, shortly before his election, Peters had 86 percent name identification with likely voters, so, "it’s something that can be made up," Czuba said.

"The first re-elect is often the hardest for any U.S. senator, and I suspect that will be the case here. He will face a strong, hard fight," Czuba said. "But he is skilled at difficult campaigns."

In 2020, Peters will be one of two Senate Democrats up for re-election in a state President Donald Trump won in 2016.

The other is Sen. Doug Jones, D-Alabama, who last year won the seat vacated by Republican Jeff Sessions when he became attorney general.

The Michigan Senate race is currently rated solid or likely Democrat by political handicappers. Kondik said much depends on how the presidential race goes and whether Republicans run a strong candidate against Peters.

"Peters starts as the favorite but not an overwhelming one," Kondik said, whose newsletter rates the races as "leans" Democratic.

"I don’t really see a Republican Senate candidate having a chance if Republicans don’t carry the state in the presidential election. That’s something these GOP candidates have to think about."