Drugmakers don’t provide discounts for all their medications, so the impact for consumers remains to be seen

The proposed regulation from Health and Human Services Secretary Alex Azar would eliminate behind-the-scenes discounts among drugmakers, insurers and go-betweens and instead require that they be paid directly to consumers when they buy their medications. 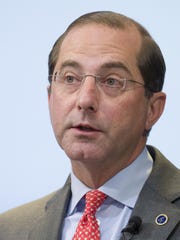 In this Oct. 26, 2018, file photo Health and Human Services Secretary Alex Azar speaks at the Brookings Institute in Washington. The Trump administration says it is moving ahead with a plan to let patients directly receive prescription drug discounts negotiated behind-the-scenes between drugmakers, middlemen, and insurers. Azar said Thursday, Jan. 31, 2019, the proposed regulation would encourage the major industry players to channel any such discounts to consumers when they purchase their prescriptions. (Photo: Alex Brandon / AP, file)

The idea is to do away with a hidden cost seen as contributing to artificially high list prices for prescription drugs. The proposal was co-authored with the Health and Human Services inspector general’s office.

The plan comes as President Donald Trump is under political pressure to deliver results on his repeated promises to slash prescription drug costs. Democrats in Congress want to empower Medicare to directly negotiate prices with drug companies, but Republicans prefer a market-based approach that keeps the government out of setting prices.

The impact for consumers would not be immediate, since the changes would take effect over the next year if all goes according to plan. Also, drugmakers do not currently provide discounts for all their medications.

“When you go into the pharmacy, there is something going on that you don’t know about,” Azar said in an interview. “Another actor is getting a payment (but) under this proposal you would actually get that money as a discount.”

House Speaker Nancy Pelosi reacted skeptically, saying the rebate proposal “puts the majority of Medicare beneficiaries at risk of higher premiums and total out-of-pocket costs, and puts the American taxpayer on the hook for hundreds of billions of dollars.”

The California Democrat added, “Experience tells us that merely trusting Big Pharma to lower its drug prices for consumers is not a solution, it’s a prescription for more of the same.”

Prices for brand-name drugs have continued to rise, although data shows the total number of price hikes this year is somewhat lower than at the same time in 2018, and the overall percentage increase isn’t as steep. Facing heavy criticism from Trump and Democrats, some drugmakers have pledged to take fewer or smaller increases as the industry tries to avoid government regulation.

Insurers and middlemen like CVS and Express Scripts opposed the plan, saying that the discounts from drugmakers are used to keep premiums lower for everybody.

“We are not middlemen, we are your bargaining power,” Matt Eyles, head of the industry lobby America’s Health Insurance Plans, said in a statement. “We cannot achieve those savings if our leverage and negotiating power is weakened through well-intentioned but misguided actions like this proposed rule.”

HHS officials acknowledge that Medicare prescription premiums could go up by $3 to $5 as a result of the change, but said they expect greater savings for people purchasing medications. Those patients would see their copays and cost-sharing reduced when they go to fill a prescription.

Drugmakers applauded the administration’s action. Stephen Ubl, head of the lobbying group Pharmaceutical Research and Manufacturers of America, said in a statement the plan would “fix the misaligned incentives in the system that currently result in insurers and pharmacy benefit managers favoring medicines with high list prices.”

Drug companies pay rebates in order to make sure their medications are covered by insurance plans that are the intermediaries between them and patients.

Thursday’s complex proposal would work by doing away with an exemption from federal anti-kickback rules that currently allows drugmakers, insurers and middlemen called pharmacy benefit managers to negotiate rebates among themselves.

It would be replaced with a new exemption for discounts offered directly to consumers.

HHS says today’s hidden rebates can amount to 26 percent to 30 percent of a drug’s list price.

Azar contends that under the current system everybody but the patient benefits from high prices. A high list price makes room for bigger negotiated rebates for insurers and middlemen. And drugmakers then merely build that expectation into their prices.

By doing away with hidden rebates, Azar says he’s hoping to force the industry to lower its prices. “This makes the rebates transparent, and it makes them available to patients,” said Azar. “Drug companies now for the first time will compete on the basis of lower list prices.”

Democrats, however, say pharmaceutical pricing remains a black box, and there’s no guarantee prices will reflect the actual costs of research, development and manufacturing.

Before joining the Trump administration, Azar was a top executive for drugmaker Eli Lilly. That led to criticism that he would be an industry pawn. But the drugmakers vehemently disagree with some of his other ideas, including an experiment using lower international drug prices to cut some Medicare costs.