GOP Macomb County public works chief Candice Miller is staying out of a fight between Gov. Whitmer and the GOP Legislature on new environmental panels

Republican Macomb County Public Works Commissioner Candice Miller has declined to weigh in on a scuffle between the new governor and the Republican-led Legislature that arose from reorganizing the environmental department.

In a Feb. 5 Facebook post, former Congresswoman Miller expressed support for Gov. Gretchen Whitmer’s decision to bring the Office of the Great Lakes under the Department of Environment, Great Lakes and Energy. The move, Miller said in the post, signified the importance of the lakes as “our most treasured asset.”

As a result, she received a shout-out during Tuesday evening's State of the State address from Democratic Gov. Gretchen Whitmer for her support of the state's new environmental department.

Part of the reorganization included abolishing commissions Republicans created at the end of 2018 to give businesses a greater say in environmental rule-making and permit reviews. It prompted the GOP-led House to approve a formal resolution to overturn the executive order.

When asked after the State of the State, Miller said she told the governor and Republican legislative leaders that her statement was not meant to endorse the elimination of the environmental commissions.

“That’s something that she’s going to have to argue out with the Legislature, really,” Miller said Tuesday. “It’s out of my lane. And the governor knows that.”

Nonetheless, Whitmer highlighted Miller’s support for the new department alongside that of the former Department of Environmental Quality Director Heidi Grether.

“The new department EGLE has gotten bipartisan support from Michigan businesses and leaders, including people like my friend Candice Miller over there who’s with us tonight,” Whitmer said Tuesday.

Miller said she and Whitmer have a shared passion for the Great Lakes and she appreciated the governor’s calls for bipartisanship.

“The truth is we’re not going to solve many of these big issues unless there is some reaching across the aisle,” Miller said.

Former Gov. Rick Snyder and the Republican-led Legislature made a habit of completing annual state budgets by June, but that trend may end under Democratic Gov. Gretchen Whitmer despite her call to continue the tradition.

“While I’m committed to having a good, responsible budget, I will not compromise the product based on an artificially set date by ourselves,” House Speaker Lee Chatfield, R-Levering, said Wednesday. 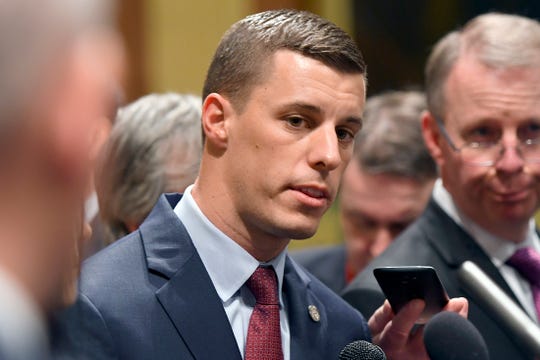 New Speaker of the House Lee Chatfield R-Levering, speaks to the media after the opening ceremonies. (Photo: Rod Sanford, Special to The Detroit News)

Whitmer is set to propose her first executive budget in early March, about two weeks later than Snyder did in 2011. It’s expected to include concrete proposals for road and education funding that are sure to trigger significant debate during a time of divided government.

Leaders on both sides of the aisle have said they hope to avoid that fate.

In her State of the State address on Tuesday evening, Whitmer said she wants to continue the “culture” Snyder created of getting “budgets done before the break,” referencing what lawmakers call an in-district work period that typically begins in late June or July.

“Just like every other workplace, we shouldn’t go on vacation until we get the job done,” Whitmer said, asking legislators who agree to raise their hands so cameras could record them.

“I want to ensure that we have a responsible budget that’s done on time, and that’s our goal,” he said, but “it’s too difficult to determine when it will be done by.”