Michigan Gov. Gretchen Whitmer, who took office Jan. 1, says she would not consider joining a presidential ticket if asked. 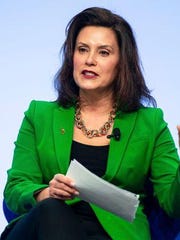 Washington — Some Democratic strategists have pushed to ensure the party's 2020 presidential ticket includes a woman, given the enthusiasm driving female voters in last year's midterm elections.

That woman will not be Gov. Gretchen Whitmer of Michigan, a key Midwestern battleground state in presidential elections.

Whitmer, who took office Jan. 1, said Sunday she would not consider joining a presidential ticket if asked.

She is in Washington this weekend to attend the National Governors Association's annual winter meeting.

"I am less than 60 days on the job, and my sole focus is ensuring that we pass a budget that fixes the damn roads and closes the skills gap in Michigan," Whitmer explained.

"I am not interested in being on a national ticket at this juncture."

She was among a record 16 women to win nominations for governor last year, and is now among nine women executives nationwide, according to the Center for American Women and Politics at Rutgers University.

While she cares "intensely" who the next president is, Whitmer is not leaning toward endorsing anyone in the growing field of Democratic presidential candidates at this time, she said.

"In fact, I’m going to invite everyone to Michigan to make their case," Whitmer said.

"Michigan’s incredibly important in the presidential election, and presidential candidates need to come in and talk to Michiganders, and that’s the only way we can access who’s going to be best fighting for the things we care about."

"I was grateful. There were a lot," Whitmer said. "I heard from Corey Booker, Kamala Harris. Everyone who’s running has reached out and offered encouragement and help at one point or another.

"I think we’re just going to open up the doors and invite everyone in who wants to come talk to Michiganders, and I’m going to do whatever I think is most helpful to the people of our state."

Whitmer said she might "possibly" endorse a 2020 candidate eventually.