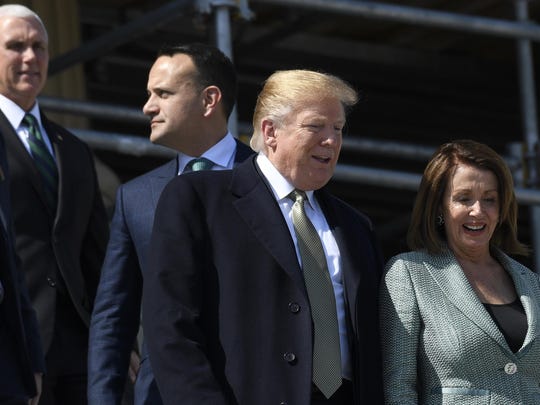 Washington – President Donald Trump on Thursday sharply criticized Britain’s handling of negotiations over leaving the European Union, saying the talks have been bungled and that the debate was dividing the country.

“I’m surprised at how badly it’s all gone from the standpoint of a negotiation,” he said.

Trump, who holds himself up as a master deal-maker, said he had given Prime Minister Theresa May his ideas on how she could negotiate a successful deal for leaving the 28-member group of nations. But “she didn’t listen to that and that’s fine. I mean she’s got to do what she’s got to do,” he said at the White House as he welcomed Irish Prime Minister Leo Varadkar for an early St. Patrick’s Day celebration.

“I think it could have been negotiated in a different manner, frankly,” Trump said. “I hate to see it being, everything being ripped apart right now.”

Trump spoke hours before British lawmakers voted to delay Brexit for at least three months. Britain’s exit from the EU had been scheduled for March 29. The motion commits May’s government to seek an extension until June 30 if Parliament approves a U.K.-EU withdrawal deal next week.

Trump predicted later Thursday that the situation eventually would work itself out. The president said he and Varadkar discussed the issue during their Oval Office meeting. Varadkar opposes Britain’s EU exit and expressed concern about how such a move would affect Northern Ireland.

“We talked about Brexit, something that’s turning out to be a little more complex than they thought it would be,” Trump said at an annual Capitol Hill luncheon for the Irish hosted by the House speaker. “But it’ll all work out. Everything does. One way or the other, it’s going to work out.”

Varadkar was returning to the White House for an evening reception and the presentation of a bowl of shamrocks to Trump. The openly gay prime minister and his partner, Matthew Barrett, started the day as the breakfast guests of Vice President Mike Pence, a conservative Christian who opposes gay rights.

Trump was at the Capitol just hours before 12 GOP senators broke ranks and voted to reject his declaration of a national emergency at the U.S.-Mexico border. Trump had taken that step so he could spend money that lawmakers refused to give the administration specifically to build a wall there.

Pelosi used the luncheon to make a pointed plug for immigration after just she had just described the annual event as “a tradition where we dispense with our differences, whether they’re political or whether they’re competitive in any other way.”

Speaking about the contributions of Irish-Americans, Pelosi quoted Republican President Ronald Reagan as saying U.S. leadership would be lost “if we ever close the door to new Americans.” Then she told the bipartisan luncheon: “You can applaud if you want.”