Poll: Most at least partly confident in Russia probe

Overall, about 6 in 10 Americans have at least some confidence in the fairness of the investigation, with 33% very confident

Poll: Most at least partly confident in Russia probe 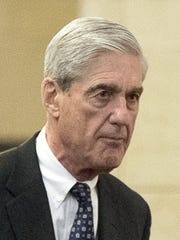 Washington – As the special counsel investigation into Donald Trump’s presidential campaign winds down, a new poll finds that most Americans are at least moderately confident that Robert Mueller’s probe has been fair and impartial.

The poll from The Associated Press-NORC Center for Public Affairs Research also finds that most Americans have some concern that Trump’s campaign had improper connections to Russia, though fewer than half say the president has done something illegal in his ties to Russia.

The survey was conducted as the Justice Department prepares to receive the findings of Mueller’s investigation into possible coordination between the Trump campaign and Russia and possible obstruction of justice by Trump himself. Though Mueller’s report will be confidential, Attorney General William Barr has said he wants to make as much public as he can under the law.

Overall, about 6 in 10 Americans have at least some confidence in the fairness of the investigation, with 33 percent very confident. Thirty-seven percent are not very or not at all confident in a fair investigation.

On Wednesday, Trump denounced the probe as “ridiculous” but said, “Let it come out, let people see it.”

Approval of Trump in the new poll stands at 40 percent, up slightly from 34 percent who approved in January. The January poll was conducted during the month-long government shutdown and found a dip in his approval rating. But compared with previous presidents, Americans’ feelings on Trump have been remarkably stable, fluctuating within a narrow band from about the mid-30s to the mid-40s.

The new poll results reflect continued deep partisan divisions about both Trump and the Mueller investigation, with views of the probe – and the president’s actions – largely unchanged over the past year.

In the latest poll, 80 percent of Republicans and just 8 percent of Democrats say they approve of Trump.

The only criminal case Mueller has brought since the last AP-NORC poll in December involved longtime Trump confidant Roger Stone, who is accused of obstruction and false statements.

“I have a lot of respect for Mueller, from everything that I’ve heard,” said 76-year-old Paul Seamans, of North Andover, Massachusetts, who is self-employed and said his political views lean conservative. “And if they do find something that he’s done wrong – and I’m talking about Trump – he should have to answer to it.”

But, he added, “I’m not sure if Trump has done anything wrong. There’s been no real proof.”

The poll shows that 45 percent of Americans are extremely or very concerned that Trump’s campaign had inappropriate contacts with Russia, and another 18 percent are moderately concerned.

“I don’t like it at all,” said 85-year-old Arlene Jornlin of New Berlin, Wisconsin. “I think Trump is shady enough without Putin helping him. I’m down on both of them, really.”

Karen Glidden, 70, a Republican who lives in Champion, Michigan, said she believes Trump has his problems, but he’s “a smarter man than to get involved with the Russians.”

She said that though she has little trust in politicians, she does have some faith in Mueller or is at least reserving final judgment until the end of the investigation.

“The eyes of the world are on him so he’s got to be more straight,” Glidden said.

It’s far from clear that Mueller’s findings, even if damaging for the president, would be likely to lead to impeachment proceedings in Congress. House Speaker Nancy Pelosi recently sought to tamp down that possibility.

The poll shows Americans are divided over whether Congress should take steps to remove Trump from office if the Justice Department finds he did not have inappropriate contact with Russia but nonetheless obstructed the investigation.

Mueller has been investigating whether the president has sought to undermine the Russia probe, including by firing FBI Director James Comey in May 2017 and by asking Comey months earlier to drop his investigation into ex-national security adviser Michael Flynn.

If Mueller does not determine illegal ties with the Kremlin but does find evidence of criminal obstruction, 52 percent of Americans think Congress should move to oust Trump from the White House, while 46 percent say Congress should not take steps to impeach Trump.

An overwhelming majority of Democrats – 90 percent – think Trump has tried to stymie the investigation, and 8 in 10 think Congress should attempt to remove him if the Department of Justice finds evidence of obstruction even if there was no inappropriate contact with Russia. About a quarter of Republicans, 24 percent, say Trump has tried to obstruct the Russia probe and roughly as many think Congress should take steps to remove him if that’s the case.

The AP-NORC poll of 1,063 adults was conducted Mar. 14-18 using a sample drawn from NORC’s probability-based AmeriSpeak Panel, which is designed to be representative of the U.S. population. The margin of sampling error for all respondents is plus or minus 4.1 percentage points.