5 takeaways from Barr’s summary of the Mueller report

5 takeaways from Barr’s summary of the Mueller report 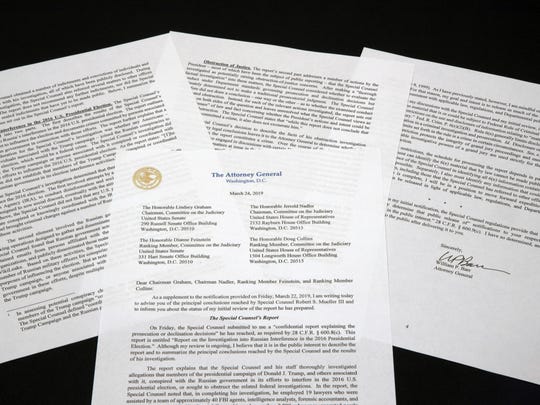 Attorney General William Barr on Sunday delivered his highly anticipated summary of Special Counsel Robert Mueller’s report on his probe into whether President Donald Trump or those around him conspired in Russia’s interference in the 2016 election.

Here are the key takeaways from the most in-depth look yet into the 22-month investigation:

The probe “did not find that the Trump campaign or anyone associated with it conspired or coordinated with Russia in its efforts to influence the 2016 U.S. presidential election,” the summary says. This finding came after Mueller indicted two dozen Russians for hacking Democrats and social media meddling during the campaign and found that a number of Russians had contacted Trump associates.

Yet Mueller could not tie such efforts to Trump or his campaign despite “multiple offers from Russian-affiliated individuals to assist the Trump campaign,” Barr’s letter said.

Obstruction: Not charged, but not cleared

“While this report does not conclude that the president committed a crime, it also does not exonerate him,” Barr quoted Mueller as saying, in a section on the question of Trump obstructing justice in the investigation of Russia’s actions. Democrats have long believed Trump’s firing of FBI Director James Comey was intended to derail the Russia probe.

Nonetheless, Barr said that he and Deputy Attorney General Rod Rosenstein, who initiated Mueller’s probe, had determined themselves “that the evidence developed during the special counsel’s investigation is not sufficient to establish that the president committed an obstruction-of-justice offense.”

Mueller found that Russian government operatives hacked into the campaign of Hillary Clinton and Democratic Party emails, and disseminated them through WikiLeaks and others. And Russians at the Internet Research Agency engaged in a social media campaign to sow discord and ultimately interfere with the election.

This finding largely tracks with the conclusions of U.S. intelligence agencies that were released in January 2017.

More from Mueller report to come

Barr said that he plans to release additional information from Meuller’s report at a later date now that these initial findings have been made public. He wrote that his “goal and intent is to release as much of the special counsel’s report” as he could: consistent with applicable law, regulations, and departmental policies.” He added that he would be able “to move forward expeditiously” with the process once he had determined what must be held back to protect ongoing investigations.

The White House may be given the chance to use executive privilege to block certain details.